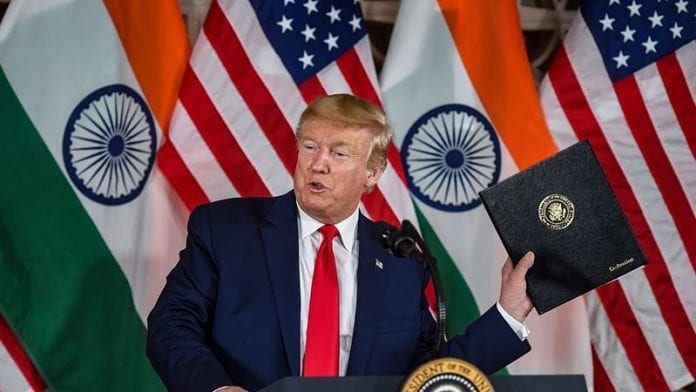 A day after US President Donald Trump said India had worked really hard on religious freedom, an organisation of Indian-American Christians has thanked him for raising the issue.

The Federation of Indian American Christian organisations in North America (FIACONA) said the political tranquillity was fundamental to economic progress, while praising Trump for taking up the issue of the plight of minorities in India, during his talk with Prime Minister Narendra Modi.

FIACONA said it “truly hoped” that the Indian government would respond positively to the concern expressed by the president that would be in the best interest of the country.

Asked specifically about allegations that Muslims are being subjected to discrimination and there have been rising cases of hate crime in India, Trump in New Delhi on Tuesday said: “We did discuss that and specifically Muslims. We also discussed Christians”.

Reacting to the remarks of Trump, president of FIACONA Koshy George said: “Although we lack any substance from their discussions, we are encouraged to see that the president took the opportunity to include the issue of religious freedom as a priority item at these important bilateral discussions with Prime Minister Modi”.

Despite the best efforts to showcase India in a positive light, the world is also watching the ongoing violence “as a result of the policies enunciated by the current BJP regime,” said John Prabhudoss, chairman of the FIACONA.

“Political tranquillity is fundamental to economic progress, and by promoting the policies that drive the country towards majoritarianism and intolerance, the Modi regime may be jeopardising the prosperity of its ordinary citizens,” he said.

“We call upon the prime minister to uphold India’s constitution that guarantees freedom of conscience and religious freedom to every Indian,” Prabhudoss said.

Ahead of Trumps India visit, FIOCANA in a letter had urged him to raise the issue of religious freedom in his talks with the Indian leadership.

India has witnessed massive protests over the new citizenship law and National Population Register with opposition parties and several rights groups alleging that the measures are aimed at marginalising the Muslim community.

The national capital witnessed massive violence in the midst of Trump’s high-profile visit. The government on Monday said the violence was triggered to tarnish India’s image.

In a media statement after his talks with Prime Minister Modi, Trump said both the countries have always been united by shared traditions of democracy and constitutions that protect freedom, individual rights, and the rule of law.

Badrinath portals to open on April 27