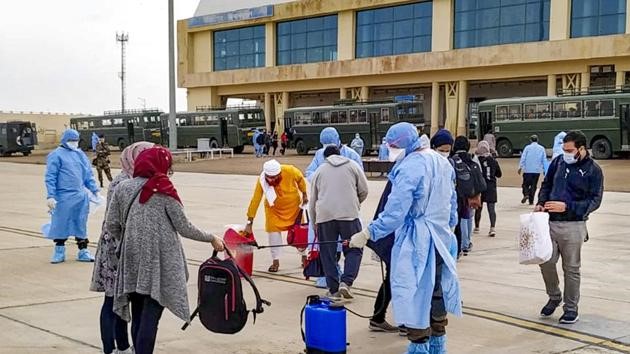 Kerala High Court directed the Centre to consider a plea by NRIs to include the name of the Covishield vaccine, 'Oxford–AstraZeneca COVID-19 vaccine' and passport number in their vaccination certificates. PTI Representational picture

Hundreds of Non-Resident Indians in coastal Karnataka, who had taken their first dose of vaccine in a foreign country are facing a huge crisis, as certain WHO-approved US and Chinese vaccines like Pfizer, Johnson & Johnson, Moderna, and Sinopharm are not available in India.

Besides this major stumbling block, uncertainty looms over the NRIs who reached India prior to March and took the Covishield vaccine in India. Countries like Kuwait and UAE want India to mention the Oxford-AstraZeneca vaccine (instead of its name in India – Covishield) and include the passport number and not the Aadhaar number in their vaccine certificates.

The non-inclusion of the vaccine name and the NRI’s passport number in their vaccination certificates are affecting their travel plans and prospects of resuming work in a foreign country. And for those who took Covaxin, the problems are even more, as the WHO is yet to approve the vaccine and they cannot travel until the clearance is given.

Sharath Kumar, an NRI working in Kuwait reached Mangaluru in March. While he took two doses of Covishield and now wishes to return to Kuwait, the technical glitch involving Covishield being mentioned in his vaccine certificate and not Oxford-AstraZeneca has put paid to his travel plans.

“Even if the flight operations resume, the Kuwait government has to recognise Covishield. We have raised this concern with the embassy and they promised to  take it up with the government. There’s no solution as yet however,” said Kumar.

Following similar concerns in neighbouring Kerala, based on a petition filed by NRIs in the High Court, the court on June 2 ordered the state government to address the issue and directed the Centre to consider a plea to include the name of the Covishield vaccine, ‘Oxford–AstraZeneca COVID-19 vaccine’, as well as the passport number as an identification number in the vaccination certificates of NRIs.

The petitioners had also sought a directive to ensure that Covaxin is accepted internationally by other countries.

The Court on June 24 issued notice to the Centre asking what steps have been taken to get approval from World Health Organisation (WHO) for indigenously developed COVID-19 vaccine, so that it gains international acceptance allowing people to travel abroad. The Kerala government, instead of waiting for the Centre to act, issued guidelines to give certificates mentioning the relevant details through the state-managed COVID portal.

The members of the NRI association in Karnataka have informed the Indian government officials and also the embassy in Kuwait, and are hopeful that the issue will be resolved.

Sarvotham Shetty, president of NRI Association in UAE said approximately 2,000 NRIs are stuck in the country. “The vaccine issue needs to be resolved on priority as the flight ban is expected to be lifted in August. Since visas of many NRIs will expire soon, the government should step in to act,” he said.

Shetty also highlighted how the state did not have a nodal officer to approach and air their concerns. “The deputy chairman post in the NRI cell of the Karnataka government has been lying vacant for the past several months. In such a time of crisis, who should we approach?” he asked.

The government of Karnataka created a state NRI Forum to act as a liaison and supporting body to address appeals and issues of NRIs in the state. It is headed by the Chief Minister, B S Yediyurappa.

Dr Arathi Krishna, former deputy chairperson of the NRI Forum of Karnataka said they have taken up the concerns with Deputy Chief Minister Ashwath Nararayan. “We have brought it to the notice of Deputy CM. He assured me that he will take it up and said the passport number can be included in the certificate. But with respect to including the full name of Covishield vaccine, we are yet to hear on this,” said Krishna.

There are 12.6 million non-resident Indians (NRIs), those holding an Indian passport but ordinarily residing outside the country, spread across more than 200 nations, according to the MEA. But 8.9 million of them live in just six countries.

Among them, the largest number of Indians, 3.4 million, live in the United Arab Emirates, which is approximately 27 per cent of all NRIs around the world. Another 2.6 million are in Saudi Arabia, while another 2.9 million are found in Kuwait, Oman, Qatar and Bahrain.