The contentious Citizenship (Amendment) Bill, 2019 was passed in Lok Sabha with 311 votes in favour and 80 against it after a day-long heated discussion on the legislation on Monday (December 9) night.

Responding to a series of questions after the discussion ended at night, Home Minister Amit Shah asserted the Bill was not in violation of constitutional provisions. It will give relief to people living a painful life after facing persecution in neighbouring countries, he said.

Had India not been divided on religious lines, there was no need for the Bill, he said targeting the Congress. The Bill does not violate Article 14 of the Constitution as it aims to give citizenship to persecuted people, the minister said.

“No one should have any fear of being persecuted under the Narendra Modi government,” he said.

In a series of tweets, Shah also expressed his gratitude to Prime Minister Narendra Modi for making the Bill a reality. “I extend my gratitude to PM @narendramodi for making the historic Citizenship Amendment Bill a reality that will allow India to open its doors to minorities from Pakistan, Bangladesh and Afghanistan who are facing religious persecution. I thank everyone who supported this bill,” he tweeted.

“It is well known that those minorities who chose to make Pakistan, Bangladesh and Afghanistan their home had to constantly live in the fear of extinction. This amended legislation by Modi government will allow India to extend them dignity and an opportunity to rebuild their lives,” he said.

Earlier, expressing his elation over the passage of the Bill in the Lok Sabha, on Twitter, Prime Minister Narendra Modi said the Bill was in line with India’s centuries old ethos of assimilation and belief in humanitarian values.

“Delighted that the Lok Sabha has passed the Citizenship (Amendment) Bill, 2019 after a rich and extensive debate. I thank the various MPs and parties that supported the Bill. This Bill is in line with India’s centuries old ethos of assimilation and belief in humanitarian values,” he tweeted.

“I would like to specially applaud Home Minister @AmitShah Ji for lucidly explaining all aspects of the Citizenship (Amendment) Bill, 2019. He also gave elaborate answers to the various points raised by respective MPs during the discussion in the Lok Sabha,” the PM said in another tweet. 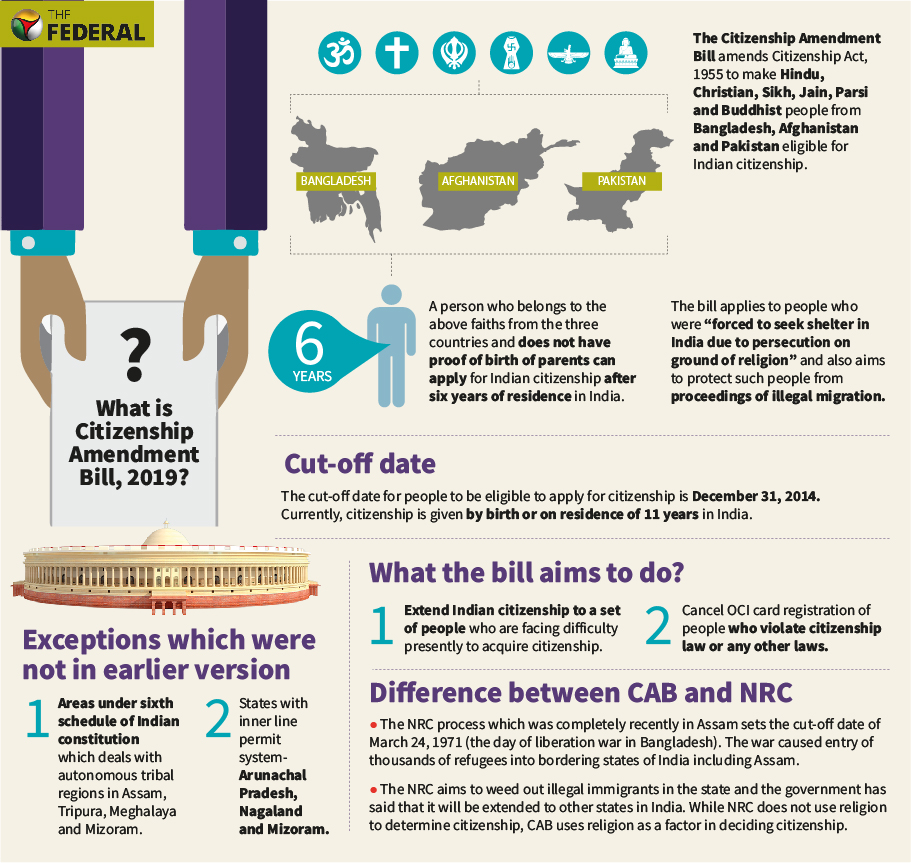 According to the Bill, members of Hindu, Sikh, Buddhist, Jain, Parsi and Christian communities, who have come from Pakistan, Bangladesh and Afghanistan, till December 31 2014, facing religious persecution there, will not be treated as illegal immigrants and will be given Indian citizenship.

Shah said as per the bill, it will not be applicable to the tribal areas of Assam, Meghalaya, Mizoram or Tripura as included in the Sixth Schedule to the Constitution and in the areas covered under The Inner Line Permit (ILP), notified under the Bengal Eastern Frontier Regulation, 1873. Currently, the ILP is applicable in Arunachal Pradesh, Nagaland and Mizoram. The Bill will also not be applicable to Manipur, which will be included in the ILP system, the home minister told the Parliament.

The Bill says such refugees will be given Indian citizenship after residing in India for five years (six years in CAB 2016), instead of 11 years earlier. The bill also proposes to give immunity to such refugees facing legal cases after being found as illegal migrants.

The Bill, which has been opposed by the Congress, Trinamool Congress and other opposition parties, was introduced after a division of votes for which 293 MPs voted in favour and 82 against it.

During the debate after the introduction of the Bill, Congress leader Shashi Tharoor said if the Bill is passed by Parliament, it will be a victory of the thoughts of Muhammad Ali Jinnah over Mahatma Gandhi. The proposed legislation goes against the basic principle of the Constitution, he added.

Meanwhile, AIMIM president Asaduddin Owaisi tore a copy of the Bill in the Lok Sabha saying it is against the Constitution of India and disrespects the country’s freedom fighters.

The Bill was an election promise of the BJP in 2014 and 2019 Lok Sabha elections. The BJP-led NDA alliance had introduced the Bill in its previous tenure and also got the Lok Sabha’s approval. But it was not introduced in the Rajya Sabha, apparently due to protests in the Northeast. That Bill lapsed following the dissolution of the last Lok Sabha.