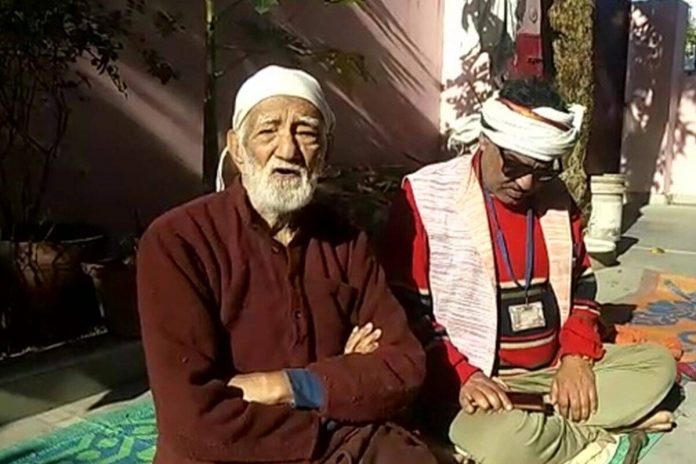 Bahuguna’s notable contribution to the Chipko movement, and to environmentalism, was his creation of the slogan ‘ecology is permanent economy’.

Environmentalist and Chipko movement pioneer Sunderlal Bahuguna died at the All India Institute of Medical Sciences in Rishikesh (Uttarakhand) on Friday after battling COVID-19 for several days. He was 94. He breathed his last at 12.05 pm, as per a PTI report.

Bahuguna, one of India’s best-known environmentalists, was admitted to the hospital on May 8 after testing COVID positive. He had been critical since May 20 with his oxygen level dropping alarmingly. He was on CPAP therapy in the ICU of the premier hospital.

In his tribute, Prime Minister Narendra Modi said the late environmentalist manifested “our centuries-old ethos of living in harmony with nature.” Uttarakhand CM Tirath Singh Rawat expressed sadness saying it was Mr Bahuguna who turned the Chipko movement into a people’s movement. Rawat said Bahuguna’s death is a big loss not just for Uttarakhand and India but for the entire world.

Chipko in Hindi means ‘stick together’. During the 1970s, when reckless chopping of trees began affecting people’s livelihoods, villagers in then Uttar Pradesh hill area of Chamoli began to protest. A defining moment came when the government in January 1974, announced the auction of 2,500 trees, near the Alakananda river.

Scores of village women came out and prevented the men who had arrived with their machines from cutting the trees. In a Gandhian way of protest, the village women embraced the trees. Three local women, Gaura Devi, Sudesha Devi, and Bachni Devi, championed the cause. Bahuguna was closely associated with Gaura Devi.

Bahuguna’s notable contribution to the Chipko movement, and to environmentalism, was his creation of the slogan ‘ecology is permanent economy’. Born on January 9, 1927, in Maroda village of Tehri, Bahuguna undertook a 5,000-km trans-Himalaya march from 1981 to 1983, travelling from village to village, gathering support for the movement. He met Prime Minister Indira Gandhi which reportedly led to a 15-year ban on cutting of green trees in 1980.

Then came the hydro-power construction at Old Tehri (the town has been submerged and instead New Tehri Township has come up) in the early 90s. Bahuguna passionately led the anti-dam protests for decades and repeatedly went on hunger strike at the banks of the Bhagirathi.

In 1995, he called off a 45-day-long fast following an assurance from the then Prime Minister P V Narasimha Rao of the appointment of a review panel on the ecological impacts of the dam. Thereafter he went on 74-day fast at Delhi’s Raj Ghat during the tenure of Prime Minister, Deve Gowda, who gave personal undertaking of project review.

However, despite a court case in the Supreme Court that went on for over a decade, the work resumed at the Tehri dam in 2001, following which he was arrested. Eventually, the dam reservoir started filling up in 2004, and he was finally evacuated to a new accommodation at Koti. Later he shifted to the capital city of Uttarakhand, Dehradun, and was living there with his wife.

The massive landslides of 2013 and 2020 at Kedarnath and Chamoli respectively that took lives of hundreds of people and damaged property worth crores are said to have been caused by massive construction works in the hilly areas of Uttarakhand, about which Bahuguna had repeatedly warned.

In 2018, the environmentalist had expressed his deep concern over cutting of trees to make way for the construction of Pancheshwhar dam and the all-weather Char Dham road, a dream project of Prime Minister Modi.

On his 92nd birthday, sitting along with his wife Vimla in Dehradun, Bahuguna had said: “Trees are our natural dams and they conserve the soil and recharge our water sources and the groundwater. Dams are a temporary solution and take away our fertile land and cut people off from their roots.”

Today there are more than 100 small dams — some of them as small as 25 MW capacity — in the high hills of Uttarakhand and the danger posed to them is loud and clear, a high-powered government panel has warned in its various reports to the Centre as well as the Supreme Court.

Bahuguna was a recipient of several top awards such as the Padma Shri, Jamnalal Bajaj Award and Padma Vibhushan.