In an open letter to the citizens of India, eight eminent personalities, including former Supreme Court judge J Chelameswar, have appealed to “introspect and audit” the working of the Constitution ahead of the 70th anniversary of the Republic. The signatories also included acclaimed filmmaker Adoor Gopalakrishnan and former chief election commissioner SY Quraishi.

“Is the Constitution a mere administrative manual which enables the elected governments to claim legitimacy for abuse of power, and allows the citizens to convert liberty into license disregarding rights of others? Is it simply another text penned by ink, or a sacred text written in the blood of innumerable martyrs who transcended the barriers of caste, religion, region, ethnicity and language?” they asked in an open letter.

Their appeal comes in the backdrop of widespread protests against the Citizenship (Amendment) Act, which critics say discriminates on the basis of religion and violates the Constitution. The protests had turned violent last month triggering police action and resulting in the death of several people in Uttar Pradesh, Karnataka and Assam.

Also read | FIR against Mani Ratnam, Guha, others who wrote to Modi on mob lynching

Stressing that peaceful reconciliation of conflicting interests, healthy public discourse, and respect for dissenting views are at the heart of democracy, they urged people to “introspect whether truth and non-violence the two values held very dear to the heart of the Father of the Nation continue to inform our actions in the public sphere.”

Under the title ‘70 years of Indian Constitution-A Defining Moment’, the signatories of the letter said 70 years of the working of the Constitution provided an “opportunity to celebrate our successes, and also to introspect and resolve to overcome our shortcomings”.

“We appeal to all citizens to utilise this solemn occasion to celebrate our success, reflect on our current concerns, particularly about our plural, secular society, and resolve to fulfil the Constitutional goals envisaged by Dr Ambedkar and our forefathers as summed up in the Preamble,” they said. 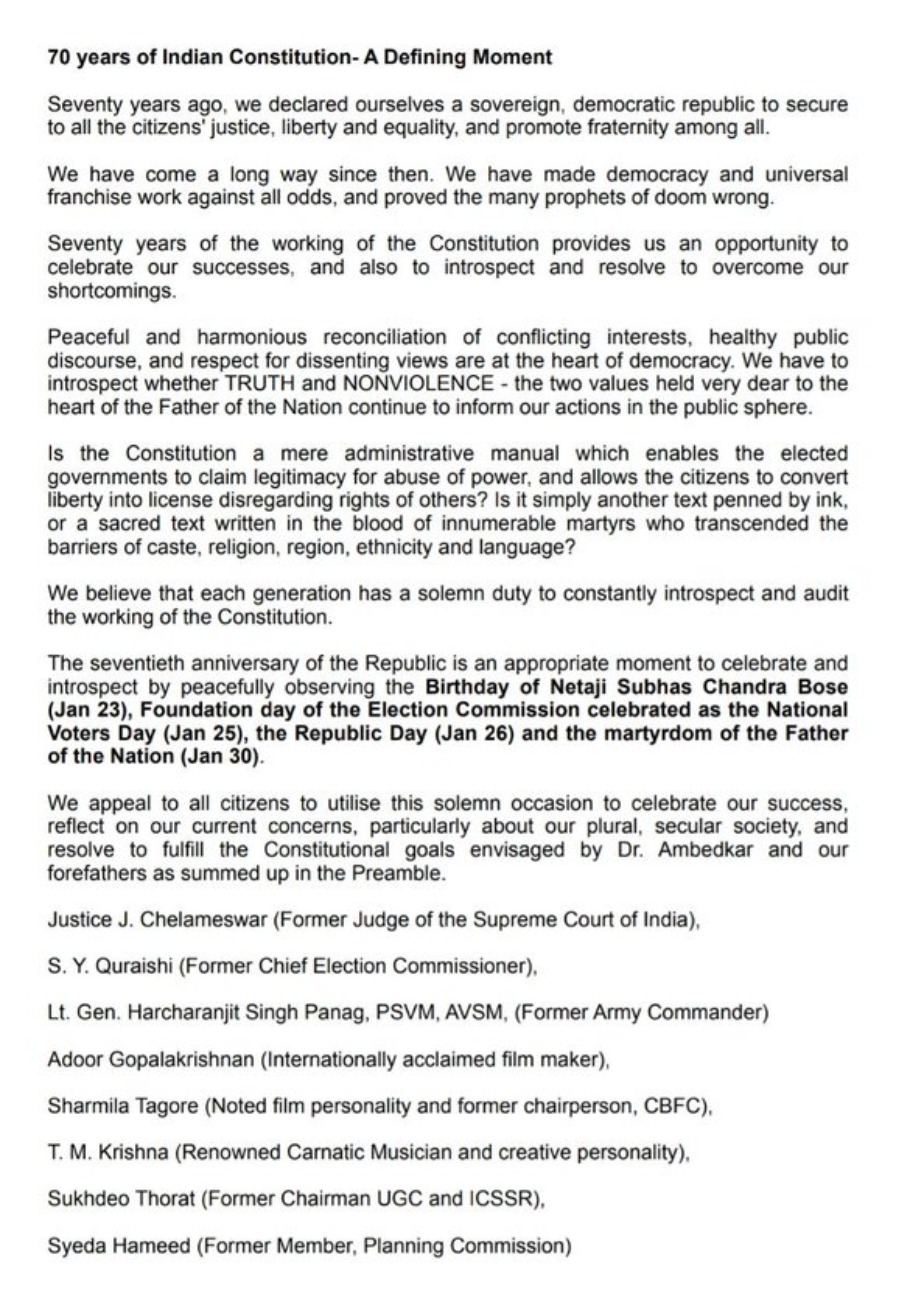 The open letter was released exactly an year after four senior judges of the Supreme Court, including Chelameswar, had mounted a virtual revolt against the then chief justice, listing a litany of problems that they said were afflicting the country’s highest court and warned could destroy Indian democracy.

The unprecedented move at a joint news conference had left the judiciary and observers stunned, leaving uncertain how this open dissension in the hallowed institution would be resolved. On Monday, the eminent personalities said each generation has a “solemn duty to constantly introspect and audit the working of the Constitution”.

“The 70th anniversary of the Republic is an appropriate moment to celebrate and introspect by peacefully observing the birthday of Netaji Subhas Chandra Bose (January 23), foundation day of the Election Commission celebrated as the National Voters Day (January 25), the Republic Day (January 26) and the martyrdom of the Father of the Nation (January 30),” they said.

The citizenship law, notified on January 10, grants Indian citizenship to non-Muslim migrants from Afghanistan, Pakistan and Bangladesh who came to India till December 31, 2014, because of religious persecution in their countries.

However, the government and the ruling Bharatiya Janata Party has defended the law, saying the minority groups from the three countries have no other option but to come to India when they face religious persecution there.

Violence at home and school must end: TM Krishna on custodial deaths...

Supreme Court refuses to intervene in changing India’s name to...