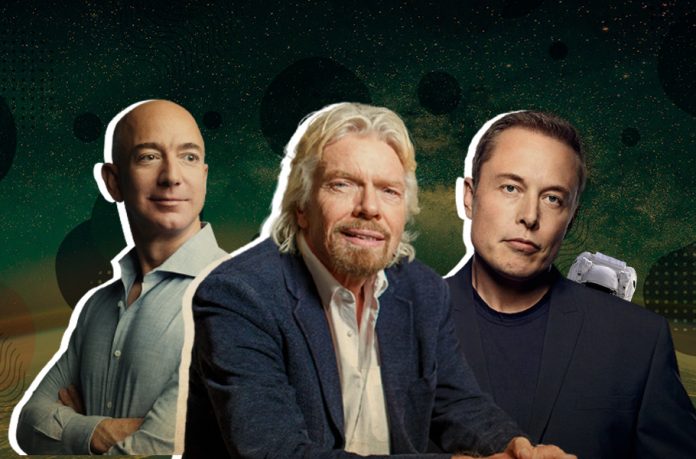 Space invaders Richard Branson (centre), Jeff Bezos (left) and Elon Musk. The FAA's rule change raises questions about who would be considered an astronaut in future

US aviation authorities have tightened their definition of the word “astronaut”, in a move that pours cold water on the dreams of billionaire spacehoppers Jeff Bezos and Sir Richard Branson and other plutocrats who wish to follow in their footsteps.

The Federal Aviation Administration (FAA) has changed its rules on who can and cannot be called an ‘astronaut’. Now hopefuls must be part of the flight crew and make contributions to space flight safety to make the cut, the BBC reported.

These are the first changes since the FAA’s ‘WINGS’ programme began in 2004, the broadcaster said.

The FAA revised its criteria for awarding astronaut wings to those flying on commercial spacecraft the same day that Amazon founder Bezos blasted into space aboard his Blue Origin rocket. Nine days earlier, on July 11, the Virgin Galactic founder also travelled to the edge of space on his own rocket plane.

Also read: Jeff Bezos is joining the astronaut club; here’s what you need to know

The two billionaires travelled 50 miles (80km) above the Earth’s surface, accomplishing one of the criterions for qualifying as commercial astronauts. But altitude aside, the new rules say would-be astronauts must also “demonstrate activities during flight that were essential to public safety, or contributed to human space flight safety”.

“When the programme was first created in 2004, its focus was to recognise flight crew members who furthered the FAA’s mission to promote the safety of vehicles designed to carry humans,” the FAA said in a statement to SpaceNews. “The FAA has now changed the focus to recognise flight crew who demonstrate activities during flight that were essential to public safety, or contributed to human space flight safety, among other criteria.”

That change “aligns more directly to the FAA’s role to protect public safety during commercial space operations”, the statement said.

In 2004 and 2019 the FAA did award commercial astronaut wings to those who piloted Virgin Galactic’s SpaceShips. But the latest updates raise questions about who would be considered eligible in future.

Tesla and SpaceX founder Elon Musk is also eyeing a space trip later this year. In 2020 SpaceX became the first private company to send humans to space and to the International Space Station.