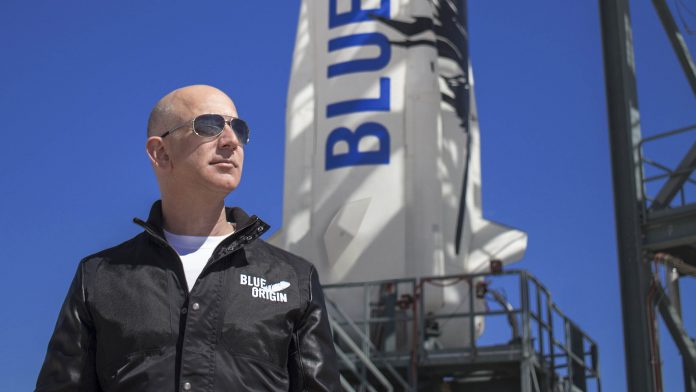 He’s the richest on earth, but Jeff Bezos is keen on space. The Amazon founder who’s beaten Warren Buffet and Bill Gates to top the billionaire list for years in a row will join the astronaut club on Tuesday, just a week after Virgin Group chief Richard Branson flew into space.

It’s a red-letter day not only for Blue Origin, his space-tech company, but also the space tourism industry, which is making significant gains as its billionaire-founders turn passengers and brand ambassadors themselves.

The origin of Blue Origin

Bezos founded Blue Origin, a maker of ‘fully reusable’ space vehicles, in 2000, with a “vision of enabling a future where millions of people are living and working in space to benefit Earth”. According to the company website, Blue Origin believes that mankind needs to explore and find new energy and material resources beyond this planet. Also, industries that stress Earth can be moved into space sometime in the future, it says.

Toward this goal, Bezos will be part of the crew of the space vessel New Shepard that will blast off at 8:00 am Central Time (1300 GMT) on Tuesday, July 20, from Launch Site One, a remote facility in the west Texas desert, said an AFP report. New Shepard will use a liquid hydrogen/liquid oxygen engine with zero carbon emissions. People can watch the live streaming of the trip on BlueOrigin.com.

This is just the beginning. Watch the launch live on July 20 at https://t.co/7Y4TherpLr. Broadcast starts at 6:30 am CDT / 11:30 UTC. #NSFirstHumanFlight pic.twitter.com/W0yGMftwoW

The company has set a high target toward which this trip is but a small step. Among other spacecraft, it is developing New Glenn, a heavy-lift orbital rocket, and a moon lander that it hopes to contract to NASA, the report said.

What makes the Bezos trip special

Bezos’s flight will be a fully autonomous one. It will be the world’s first unpiloted suborbital flight with an all-civilian crew, said a Reuters report.

Female aviator Wally Funk, 82, is set to be the oldest-ever astronaut as she joins the New Shepard team. She was one of the 13 women who cleared the same rigorous testing as the Mercury Seven male astronauts in NASA’s 1960s space programme, said Reuters. However, she was denied the chance to become an astronaut then because of her gender.

On the other end of the age spectrum, Dutch teenager Oliver Daemen, Blue Origin’s first paying customer, will also be part of the Bezos team, making him the youngest-ever astronaut. Daemen, a space astronaut, holds a private pilot’s licence and plans to take up a physics course in university this fall semester.

There’s family, too. Jeff Bezos’ younger brother and ‘best friend’ Mark is the fourth member of the team. Mark Bezos is a financier handling the Bezos Family Foundation; he is also a volunteer firefighter, said AFP.

Blue Origin had held a $28 million auction for another seat on the spacecraft, but the anonymous winner opted out of this trip due to ‘scheduling conflict’. This person will take part in a future flight.

Branson and Bezos — or their respective teams — have exchanged sharp words on whether or not the former actually travelled up to space.

From the beginning, New Shepard was designed to fly above the Kármán line so none of our astronauts have an asterisk next to their name. For 96% of the world’s population, space begins 100 km up at the internationally recognized Kármán line. pic.twitter.com/QRoufBIrUJ

The Karman line is the widely agreed upon boundary of space, lying 100 km above mean sea level. There are no national boundaries or human laws applicable beyond this line. However, the US considers 80 km as the cut-off point beyond which it considers space as a ‘territory’ to begin.

The Virgin Galactic spacecraft that Branson took reached a height of 86 km — beyond the US cut-off but within the Karman line. The Blue Origin flight is scheduled to go 106 km high, leading the Bezos team to argue it’s well and truly a ‘space trip’, implying Branson’s wasn’t.

Also read: Richard Branson is now an astronaut, but did he actually go to space?

The Blue Origin crew will spend a few minutes beyond the Karman and view the curvature of the Earth from large windows that, according to media reports, form a third of the cabin’s surface area.

While Branson’s team had Indian-origin female astronaut Sirisha Bandla, there’s an Indian connect in the Bezos trip, too. Sanjal Gavande, a 30-year-old woman hailing from Maharashtra’s Kalyan, is part of the engineering team that built New Shephard.

According to media reports, Gavande is a systems engineer at Blue Origin. After getting a graduate degree in mechanical engineering from the University of Mumbai, she went to the US in 2011 to do a master’s in the same stream from the Michigan Technological University.

The daughter of a municipal corporation employee and a retired MTNL official, Gavande took up aerospace as a subject in her MS course. She holds a commercial pilot’s licence, and applied for a space engineering job at NASA, but did not make it due to citizenship issues.