In the National Award winning film, Orey Oru Gramathiley, actor Lakshmi portrays the role of an IAS officer who had produced a fake caste certificate to get college admission

Sometimes, life can imitate art too. Quite often, imaginative stories that film-makers narrate on the celluloid screen can play out in real life too becoming a case of real life copying reel life.

Take the case of Ramana (2002), which dealt with the collapse of a flat built on a pond. Many years later in 2014, a building in Porur in Chennai collapsed in a similar fashion. In Anbe Sivam (2003) there are references to a tsunami and a year later, the tsunami struck the Indian Ocean area and wreaked havoc. 7 am Arivu, the Suriya-starrer which released in 2011 referred to a disease spread by the Chinese through dogs. Can we dare say that they had a premonition about COVID-19?

The 2019 film, Uriyadi 2 dealt with a gas leakage in a factory, which unfolded as a tragedy in Visakhapatnam last year. To add to this list, there’s the K. Jyothi Pandian directorial Orey Oru Gramathiley (1987) (Once upon a time in a village), which starred the famous actor Lakshmi and Nizhalgal Ravi. The film, which was initially banned, centred on caste-based reservation.

Gayathri (Lakshmi), a studious Brahmin girl lives in poverty. Her father Shanara Sastry (Poornam Viswanathan) wants Gayathri to pursue her higher studies and achieve many things in her life. However, he doubts if she would be able to get a seat in a college since they belong to a “forward” community. He fears that she may not get the opportunity due to caste-based reservations.

Haunted by this thought, he approaches his friend Devasahayam (Charuhasan), a tahsildar in his village. The tahsildar suggests that he should get a fake caste certificate, which would identify Gayathri as a Karuppayee, who belongs to a scheduled caste. He also prepares the certificate and hands it over to Sastry.

Using that certificate, Gayathri completes her education and becomes an IAS officer. After working in Delhi for a while, she gets transferred to Annavayal in Tamil Nadu, a village always affected by frequent floods. As the block development officer, she brings in a lot of development to the village and the residents start showering her with love.

All of a sudden, Gayathri is slapped with a suspension order. Nurturing resentment against her over a personal fight between them, Devasahayam’s brother-in-law shoots off a complaint to the government revealing that Gayathri had forged her community certificate. A case is filed against Gayathri and she decides to fight her case on her own.

In the court, Gayathri argues that the government should consider the economic background while giving reservation, instead of just focussing on caste-based reservations. While Gayathri agrees that she was in the wrong to obtain a fake community certificate, she states that she has not committed a crime. The court accepts some of her arguments but still sentences her to three years in jail because she had submitted a forged certificate, which is a crime. The film concludes with Bharathiar’s words: ‘Jaathigal illaiyadi paappaa’ (there is no castes, child).

According to film historians, this is the first film in Tamil cinema that directly handled caste as an issue. Though the film was banned by the government since it was against reservation, the Supreme Court allowed the film to release. And, it went on to win a National Award for Best Film on social issues. 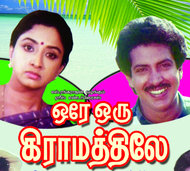 In the last thirty-three years since the film released there have been many incidents when people’s community certificates have been faked and many have been caught and arrested. It is however rare for an IAS officer to get arrested or fined for faking a caste certificate.

And, probably, this is the very first time, an independent MP from Maharashtra, Navneet Kaur-Rana has been fined ₹2 lakh by the Bombay High Court (HC) on June 8, for producing a fake caste certificate with the help of her father. Very much like what happens in Orey Oru Gramathile.

Kaur, who had contested from the Amravati constituency in 2019, had won the elections by defeating Shiv Sena candidate Anandrao Adsul. It is to be noted that she got a fake caste certificate in 2014 itself and contested in that year’s parliamentary elections as well. A case was filed back then itself. However, the Caste Scrutiny Committee (CSC) in 2017 validated her claim that she is from the ‘Mochi’ community.

Two people filed a petition against her this time. Adsul knocked on the doors of the Bombay HC in 2018, while a social worker Raju Shamrao Mannar filed a petition in 2019. Hearing these petitions, the court cancelled and confiscated the wrong caste certificate and squashed the validation by the CSC as well. Not before stating that such an act may “deprive genuine and deserving persons from benefits prescribed in the law.”

Stating that producing fake certificates is a “systematic fraud”, the court observed that “a wrong caste validity certificate granted in favour of the party who does not belong to that caste may deprive a genuine and deserving person belonging to such reserve category of the caste and of the benefits and all the benefits prescribed in the Constitution of India”.

With the order, the Member of Parliament, who got elected in the 2019 general elections as an independent candidate, may have to lose the seat which was reserved for a candidate from a Scheduled Caste.

Presenting a fake caste certificate is a punishable crime no doubt, but it appears that after all these years, Gayathri’s arguments in the film are being heard by the present government. It has brought in a new category titled ‘economically weaker section’ under caste-based reservation. However, the cry by social justice activists that reservation is not a poverty eradication scheme still goes unheard.

G. Karunanidhy, a reservation activist said that in Tamil Nadu, the Scheduled Tribe (ST) communities are largely affected by these forgeries.

“In ST, the literacy rate is very low. They suffer when many get fake ST caste certificate and try to join government jobs. Unless the authorities issuing the certificates are uncorrupted and multiple stages of checking are brought in, these incidents will continue to happen,” said Karunanidhy.