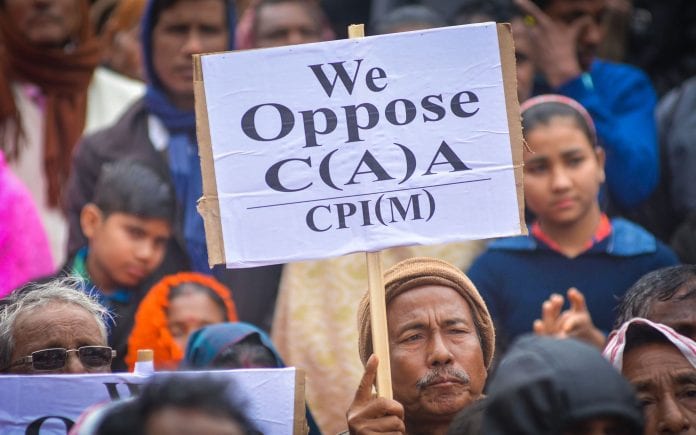 Agitators of the Trinamool Congress students’ wing continued their sit-in demonstration here against the amended Citizenship Act for the fifth consecutive day on Tuesday (January 14).

The protesters of the Trinamool Congress Chhatra Parishad (TMCP) demanded that the new citizenship law be revoked.

West Bengal Chief Minister Mamata Banerjee had visited the demonstration site on Rani Rashmoni Avenue in the heart of the city on Monday and urged the student community to lead the anti-CAA protests across the nation.

The protesters were seen carrying posters and placards against the CAA and the National Register of Citizens (NRC).

TMCP leaders said their stir is not only against CAA and NRC but also against violence in JNU and Jamia Millia Islamia in New Delhi.

CPI(M)-affiliated Students Federation of India (SFI), however, mocked the TMCP for organising a sit-in against CAA “while Mamata Banerjee compromised the fight against the law by meeting Prime Minister Narendra Modi”.

Bhim Army chief detained in Hyderabad ahead of anti-CAA protest

Constitution copy dispatched, read it when you are not dividing coun...