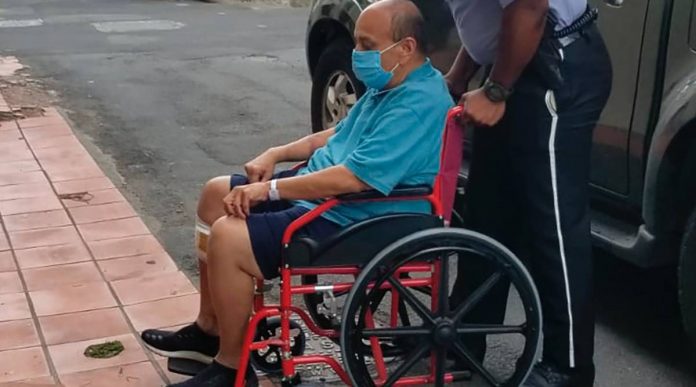 Mehul Choksi is taken in a wheelchair to the magistrate's court by police after his arrest in Roseau, Dominica, on June 2, 2021. (AP/PTI Photo)

That’s the story so far of the fugitive jeweler Mehul Choksi, wanted in India for the PNB scam: A chartered jet operated by Qatar Executive, the private arm of Qatar Airways, supposed to bring Choksi back, returned to Delhi Friday night (June 4) after waiting at the Douglas-Charles airport in Dominica for more than a week.

Choksi, a citizen of Antigua and Barbuda, had landed in another Caribbean island-nation Dominica after alleged abduction. He last appeared badly bruised in Dominica police custody.

The Dominican High Court on Thursday (June 3) adjourned the hearing on a habeas corpus petition filed on behalf of Choksi, local media reported. Judge Bernie Stephenson will decide the next date of hearing after meeting both sides, reports said.

A habeas corpus petition is filed for producing before a court a person who is under arrest or in unlawful detention.

The adjournment is to allow lawyers for Choksi and the Dominica government “to agree on the language to be used with respect to the injunction filed to prevent his removal from Dominica”, the media outlet reported.

Choksi appeared before a court in Dominica again on Friday in a case related to his alleged illegal entry into the island nation. Choksi appeared before the court on a wheelchair as he is reportedly unable to walk and had to be assisted. During the hearing, Chief Magistrate Candia Carette George explained to him that since “he is not well”, based on doctors’ advice he will be further remanded at the Dominica-China Friendship Hospital till June 7, next date of hearing.

The court adjourned the matter and is likely to hear it after a month. Till then, Choksi will remain in Dominica, the local media reported.

Meanwhile, the chartered jet flew seven hours to Madrid where it made a 90-minute halt on its way to Delhi where it landed around 11 pm IST on Friday (June 4), The Indian Express reported.

The 13-seater Bombardier Global jet, which landed in Dominica at 1.15 pm local time on May 28, is said to have carried a team of eight officials to secure Choksi’s deportation to India.

Before it landed in Dominica on May 28, the jet had flown to Delhi from Doha. It left Delhi 36 hours later for Dominica via Madrid. Dominica is an island nation to the south of Antigua and Barbuda in the Caribbean.

Choksi’s lawyer in India, Vijay Aggarwal, has said that his client is no longer an Indian citizen and cannot, under existing laws, be repatriated to India.