Over 6,000 tourists were blocked on a cruise ship in Italy on Thursday (January 30) after the vast liner was placed on lockdown over two suspected cases of the deadly coronavirus.

Samples from a Chinese couple were sent for testing after three doctors and a nurse boarded the Costa Crociere ship in the port of Civitavecchia, north of Rome to tend to a woman running a fever and suffering from breathing difficulties, the local health authorities said.

Costa Crociere confirmed the ship, carrying some 6,000 people including the crew, was in lockdown. It said a 54-year-old woman from Macau was placed in ‘solitary confinement’ in the on-board hospital last night with her travel companion and was following instructions from the health ministry.

The Costa Smeralda, the company’s flagship and the fifth-largest cruise ship in the world, “came from Palma de Mallorca and is currently engaged in one-week cruises in the western Mediterranean,” it said.

The liner has visited Marseilles in France, and the Spanish ports of Barcelona and Palma de Mallorca this week before docking at Civitavecchia, north of Rome on Thursday.

According to Italian media reports, the couple flew-in to Milan from Hong Kong on January 25, before getting on the cruise.

“The couple’s cabin has been isolated and they are in with the doctors. We’re a bit worried of course. No one is getting on or off the ship apart from the doctors. This holiday risks ending in a nightmare,” an unnamed passenger was quoted as telling ANSA news agency.

The World Health Organization (WHO), which initially downplayed a disease that has now killed 170 in China, was preparing to meet on Thursday to decide whether to declare it a global emergency. 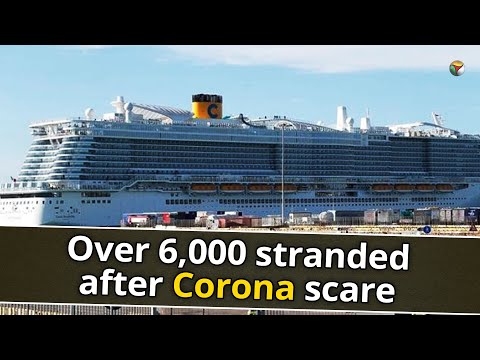