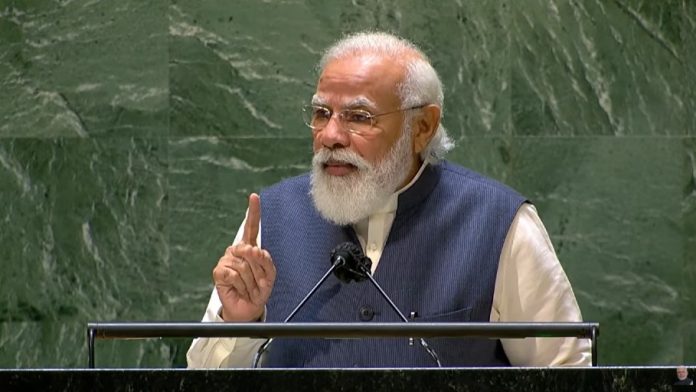 Modi said it is absolutely essential to ensure that Afghanistan territory is not used to spread, terrorism, and terrorist attacks

Wrapping up his three-day visit, Prime Minister Narendra Modi on Saturday left New York for India from the United States where he held bilateral meetings and addressed the United Nations General Assembly.

According to a PTI report, Modi attended 20 meetings in about 65 hours he spent in the country.  He also had four long meetings in flights with officials on the way to and back from the US, they added.

Sharing details, sources said Modi had two meetings in flight on Wednesday on the way to the US and three in the hotel upon his arrival.  On September 23, he had five meetings with as many CEOs followed by talks with US Vice-President Kamala Harris and bilateral interactions with his Japanese and Australian counterparts Yoshihide Suga and Scott Morrison respectively. He also chaired three internal meetings.

He had a bilateral meeting with US President Joe Biden the next day and then attended the Quad meet. Sources said Modi also held four internal meetings on September 24. As Modi left the US for India on September 25, he held two meetings on the flight back, the report said.

Modi arrived in Washington on Wednesday for his first global visit since the outbreak of the COVID-19 pandemic.

Earlier, addressing the 76th United Nations General Assembly session in New York, Modi said no country should  ‘try to take advantage of the delicate situation in Afghanistan and use it for its own selfish interests’ — in an apparent dig at Pakistan.

‘Today, the world is facing an increased threat of regressive thinking and extremism. In such a situation, the entire world must make science-based, rational and progressive thinking the basis for development.

‘In order to strengthen a science-based approach, India is promoting experience-based learning,’ he told the UNGA meeting.

‘On the other hand, countries with regressive thinking that are using terrorism as a political tool must understand that terrorism is an equally big threat for them,’ Modi said.

Modi said it is absolutely essential to ensure that Afghanistan territory is not used to spread, terrorism, and terrorist attacks.

Pakistan, specially its intelligence agencies, has close ties with the Afghan Taliban, including its dreaded faction the Haqqani Network, which has seized control of Kabul last month.

From a little boy who helped his father at tea stall…

Highlighting the strength of the Indian democracy, Modi noted how a little boy who at one time used to help his father at his tea stall, is now addressing the UNGA for the fourth time.

‘The strength of the democracy is demonstrated by the fact that a little boy who at one time used to help his father at his tea stall is today addressing the UNGA for the fourth time,’ Modi said.

India has developed the world’s first DNA vaccine that can be given to everyone above 12 years of age, the Prime Minister told the United Nations. He gave an open invite to manufacturers across the world: “Come, make vaccine in India.”

“Despite limited resources, India — which believes in the philosophy of “Seva Param Dharam” (service is the highest religion) — is completely invested in the development and manufacture of the vaccines,” Modi stressed.