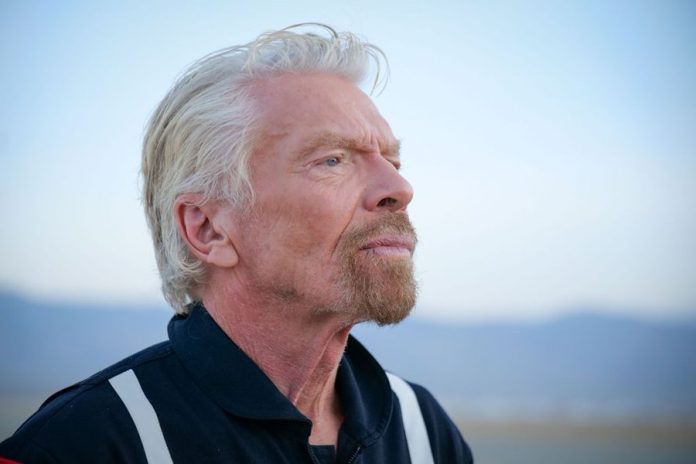 For Richard Branson, the trip is a way to give a leg up to the space tourism industry. Pic: Twitter

“As a family, our motto is, the brave men don’t live forever but the cautious do not live at all,” Richard Branson said ahead of his space trip on Sunday.

As Branson, at nearly 71, makes his historic trip to space in his company Virgin Galactic’s rocket, it is quite obvious which side the coin landed on — caution or bravery. His life till date has been one of adventure that mostly paid off.

Sir Richard Charles Nicholas Branson is a British businessman whose Virgin Group runs over 400 companies across a range of sectors worldwide. The best known of these perhaps are his music and aviation ventures, under the Virgin Records and Virgin Atlantic brands, respectively. As of July 2021, Branson’s estimated net worth is $5.7 billion, according to Forbes.

The name ‘Virgin’ was suggested by one of Branson’s employees in the record label company, as they were all new to the business. From day one, Branson’s USP has been his ability and willingness to break new grounds, invariably winning his business the first-mover advantage.

In the music business, Virgin went for controversial bands like the Sex Pistols that more conservative rivals kept away from. Rolling Stones, Peter Gabriel, XTC, Japan, UB40, Steve Winwood and Paula Abdul were among its key successes. It won equal praise for bringing obscure avant-garde music as Faust and Can to the fore, and for introducing Culture Club.

In the aviation business again, Branson took the unconventional route to challenge British Airways’ near-monopoly on Transatlantic routes. “We were a tiny airline up against much bigger players,” says the Virgin Atlantic website. “We needed to use quite a radical language to get attention. We were the airline that loudly proclaimed ‘BA doesn’t give a shiatsu’ to promote our onboard massages. Not exactly subtle, but it got us noticed.”

“Sleepy legacy carriers were too slow, or too entrenched in their ways to catch up with us. And even if they did, we’d dream up something even more innovative.” However, the pandemic hit the airline hard, and it filed for bankruptcy in August 2020.

Also read: Mars, Venus, and Moon to come together on July 12 in triple conjunction

Now though, Virgin Galactic is confident enough of its safety features to take the boss, along with five company employees, to the edge of space on its Unity 22 mission. “The skies over Spaceport America are ready. Soon our Unity22 mission specialists will soar above New Mexico and see Earth from a whole new, spectacular point of view,” the company tweeted.

For Branson, grandfather of five and ever the controversial adventurer, the trip is a way to give a leg up to the space tourism industry. It is also a way to go one up on Amazon founder Jeff Bezos. The two billionaires have been in a race to be the first to enter space in a ship built by their own respective companies.

Now, Bezos’ trip is slated for July 20, in a capsule made by his company Blue Origin. Both the businessmen have recalled their childhood dreams of space travel.

The ‘friendly’ rivalry is far from over. There is an ongoing debate on whether the Virgin Galactic flight path is actual ‘space’, as it is expected to fall short of the Karman line. The Karman line is globally acknowledged as the altitude from which space begins. On the other hand, Bezos’ Blue Origins flight, New Shepard, will briefly cross that line.

“From the beginning, New Shepard was designed to fly above the Karman line so none of our astronauts have an asterisk next to their name,” Blue Origin tweeted in a gentle dig against Virgin Galactic.

Following his trip, Branson plans two more test flights, after which he will get paying customers on board. The first of the over 600 existing ticket holders are expected to fly next year.

Once Branson is up there, Virgin Galactic will reopen reservations. Whether the existing price of $250,000 per ticket will be maintained is not certain.

Apart from fulfilling Branson’s personal aspirations, the flight is expected to be a definite milestone in commercial space travel. He is the world’s first billionaire founder of a space company to actually board a vehicle into space. While the surrounding excitement is good advertisement for the space travel industry, what is more so is the willingness of the founder to risk his life on a spacecraft.

In India, Branson’s space trip has created an extra flutter thanks to his self-proclaimed Tamil roots. A couple of years ago, the British billionaire had said at a press conference in Mumbai that some of his ancestors had been Indians.

“Great to be in India to celebrate Virgin Atlantic’s new route to Mumbai and join Anand Mahindra for our Business Is An Adventure event,” he tweeted. “We also unveiled our newest flying icon, named Aria, after my great great-great grandfather’s wife, who was Indian.”

Can Jeff Bezos be called an astronaut?