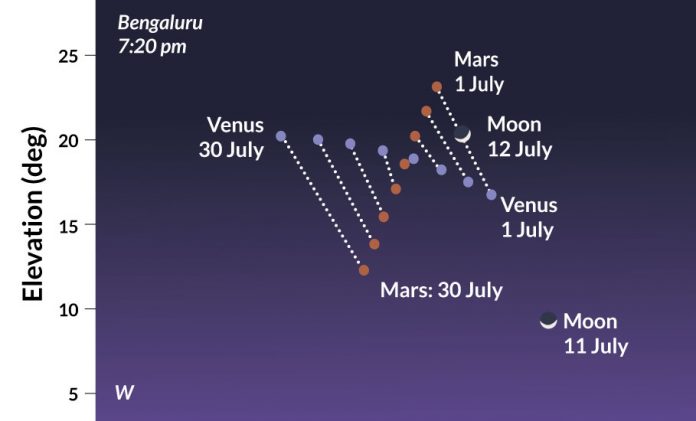 Mars and Venus will come close to each other on July 12-13, in a unique phenomenon called planetary conjunction, which would be visible to the naked eye from the earth.

Planetary conjunction takes place when two planets appear to have come closer, while in reality they remain far away.

Interestingly, in a rare instance, the moon, in its crescent shape, will also be seen close to the two planets.

The planets are already in motion towards the unique celestial event that will be visible to the naked eye. People can see it in the evenings after the sunset when the sky is clear and click pictures on their smartphones too.

Mars and Venus are passing close to each other in the sky and will be only 0.5 deg (as wide as the size of the Moon) on 13 July. The Moon will also be close to them on 12 July. This is a naked eye event, so go out and see them every evening from today. We bring you 12 posters! pic.twitter.com/kdLmiDPsCO

The Indian Institute of Astrophysics, an autonomous research institute under the Department of Science and Technology, Government of India, has announced that it will cover the event and put up images on its social media handles.

According to experts, this would be the first of three conjunctions of Venus and Mars. The next two are slated to happen on February 12, 2022 and March 12, 2022.

Human activity degraded more than a third of ...