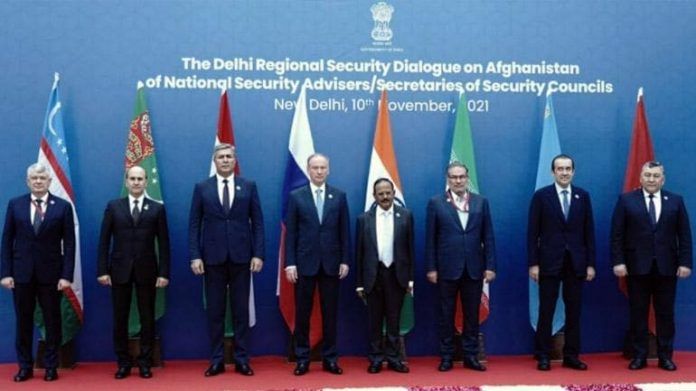 The national security advisors of the eight nations championed the importance of ensuring the fundamental rights of women as well as that of children and minority communities. in Afghanistan. Pic: Twitter@MEA

A regional security summit hosted by India, to review the security situation in the region arising from recent developments in Afghanistan, and attended by eight nations, has issued a declaration on Wednesday (November 10) emphasising that Afghanistan’s territory should not be used for sheltering, training, planning or financing any terrorist acts.

The participants, who included the national security advisers of eight nations, such as Russia and Iran, released a joint statement after discussing the evolving Afghan situation, especially the global ramifications in the wake of Taliban’s takeover in August.

Condemning in the strongest terms all terrorist activities, the eight nations in their ‘Delhi Declaration on Afghanistan’ reaffirmed their firm commitment to combat terrorism in all its forms and manifestations, including its financing, the dismantling of terrorist infrastructure and countering radicalisation. To above all, primarily ensure “Afghanistan would never become a safe haven for global terrorism”.

The Third Regional Security Dialogue on Afghanistan was held on 10 November 2021 in New Delhi in an expanded format.

In their joint statement issued on November 10, the nations called for a collective cooperation against the menace of radicalisation, extremism, separatism and drug trafficking in the region. The eight nations participating in this third edition of this regional security meet were India, Iran, Kazakhstan, Kyrgyz Republic, Russia, Tajikistan, Turkmenistan and Uzbekistan. Earlier editions of this regional security summit had been hosted by Iran in 2018 and 2019.

There was deep concern for the suffering of the Afghan people arising from the security situation and the deteriorating socio-economic and humanitarian situation in Afghanistan. They underlined the need to provide urgent humanitarian assistance to the people of Afghanistan. The terrorist attacks in Kunduz, Kandahar and Kabul were condemmed.

Also read: Afghan crisis will have implications for neighbours too: Ajit Doval

Besides expressing the need to provide assistance to Afghanistan to prevent the spread of COVID-19, the national security advisors advocated the “importance of ensuring the fundamental rights of women” as well as that of children and minority communities.

Earlier, the Ministry of External Affairs (MEA) had announced in a statement on November 8 that the Delhi Regional Security Dialogue will deliberate upon measures to address the relevant security challenges and support the people of Afghanistan in promoting peace, security and stability.

According to a NDTV report, India’s NSA, Ajit Doval, who chaired the summit, had urged greater cooperation and coordination among nations of the region on the Afghan situation. In his opening speech, Doval had said that these have important implications not only for the people of Afghanistan but also for its neighbours and the region. Further, he added, “I am confident our deliberations will be productive, useful and will contribute to help the people in Afghanistan.”

China had been invited to attend the summit had turned down the invitation due to “scheduling reasons”. “We have already given our reply to the Indian side,” said Wang Wenbin, the Foreign Ministry spokesperson, said media reports.

While Pakistan, who had also been invited, boycotted the event. A Reuters report quoted Pakistan NSA Moeed Yusuf last week as saying that India is a ‘spoiler’ in the region.