The ugly face of politicians, the lack of justice for the voiceless poor, the powerless judiciary or the lure of crime in urban cities – Bollywood, for all its song and dance, manages at times to reflect all these facets of Indian society and more in their movies. Sometimes, it may be over the top but the message hits home.

Besides tapping into the eternal, time-tested plot of the triumph of good over evil (like a runaway hit ‘Karan Arjun’ did, about two brothers who are even reincarnated to eliminate evil), Bollywood has trained their lens on religious harmony in the country with the 1977 hit ‘Amar Akbar Anthony’ and lauded the labour class in ‘Kaala Pathaar’ (1979) and ‘Coolie’ (1998).

The corrupt world of politics is an eternal favourite like the 2010 hit ‘Raajneeti’ and ‘Satyagraha’ in 2013 to mention just two. Today, Hindi films are on a Pakistan-bashing spree, as seen in ‘Bhuj’, ‘Ek Tha Tiger’, ‘Bell Bottom’ etc. Is that film reflecting real life or reel life pushing an agenda?

Alam Srinivas, a veteran business journalist and a prolific writer, however, believes that Bollywood doesn’t just feature what’s happening around us at an obvious level. It has somehow managed to convey the powerful transformations in India that has transpired after liberalisation in the last 30 years.

Titled “Reforms: How Liberalizaton impacts us; How Bollywood portrays them”, the book reflects “the good, bad and ugly” as it exists in India and shown on celluloid. But as the credits roll, the bottom-line, according to Srinivas, is that Indians have both “gained and lost” in this frenetic race chasing reforms.

And this theme runs along the book like a background score as he uses movies, the characters, the plotlines, their situations and more to drive home his insights.

Srinivas has referred to 100-odd films in this book, out of which 70 he actually reviewed, he claims. He went through Hindi movies (and some web series) that were released between 1991 and 2021 and analysed them in detail. He poured over their “scripts, scenes, dialogues, reviews and academic writings, and constructed, deconstructed, and connected them to the actual socio-economic transformations over the past thirty years”.

Srinivas starts off his book writing about the new poster boys who have stormed India Inc after liberalisation. It is a new India, where making big money is encouraged and not frowned upon. It is no mystery who these major business titans are but he uses movies like 2009 ‘Rocket Singh: Salesman of the Year’ and makes a comparison between Rocket (actor Ranbir Kapoor was highly praised for this role) to first-generation entrepreneurs like HCL’s Shiv Nadar. 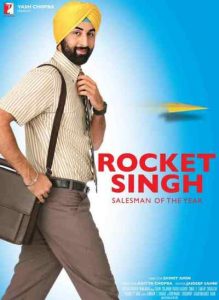 Even as Nadar ostensibly used “unusual” methods to sell computers in the 80s, especially to government departments, Rocket Singh working in a computer hardware firm clandestinely sets up a parallel sales agency to best his competitors. There is nothing underhand in it, in business ‘sab kuch chalta hai’ (everything goes) mood had set in.

Srinivas turns the spotlight on how Dhirubhai Ambani too tweaked rules and laws in socialist India to “pole vault over the high walls to enter the lavish palaces”, as he writes in the book. Obviously, he uses Mani Ratnam’s ‘Guru’, based on Ambani senior’s life, to show how India had started to bow down at the altar of Goddess of wealth.

In the second chapter, he shows how ‘Upstarts’, one of the first movies in Bollywood to be made on India’s start-up ecosystem, represented young Indians, who set up thriving businesses with a good idea, oodles of confidence and an investor or two in their pockets.

He also weaves in the Indians’ flair for ‘jugaad’ through Akshay Kumar’s ‘Padman’, which is based on Tamil Nadu social activist Arunachalam Muruganantham’s innovation of a revolutionary low-cost sanitary pad making machine and his attempts to generate grassroots mechanisms to encourage menstrual hygiene.

This is just to give you a glimpse of what to expect in the next 14 chapters. The book, however, does not dwell just on the changes in India on the economy front, but also talks about how caste, family and class play a role in business; the obsession of Indians with brands and how the well-to-do middle-class morphed into a homogeneous entity starting to dress and behave alike (delving into films such as ‘Kuch Kuch Hota Hai’, ‘Zindagi na Milegi Dobara’ to explain this point).

To discuss the “most significant change” that happened due to liberalisation for Indians, which in the author’s view is technology, he cites the examples of movies such as ‘Rajma Chawal’, ‘Hacked’,’ Ragini MMS’, and ‘Mickey Virus’. (not heard of this last movie but he does dig deep to pick out some obscure films as well).

Srinivas also devotes a chapter to India’s sprawling middle-class, the numbers of which he claims are contentious. According to him, it varies between two extremes of 25 million and 700 million. Srinivas says, “In fact, many experts feel that the Indian middle class was conceived as a concept, and packaged and sold in an exaggerated manner. Despite contrary claims, this section is fragmented and divided, which is visible in movies such as ‘Khosla Ka Ghosla’, ‘Swades’, and ‘Gully Boy.”

The penultimate chapter titled ‘Oye lucky lucky Oye’ stems from Srinivas’ belief that all of us, behave like the conman (Abhay Deol) in this Dibakar Banerjee film. The plot revolves around the rise of this conman from a petty thief to a big time operator, who goes on to live the glitzy, king-size lifestyle that Indians aspire for today.

Explaining why he chose this film, Srinivas says, “As people, whether we like it or not, accept it or not, many of us behave like conmen in our own ways, like Bunty, Babli and Lucky in the two movies, ‘Bunty Aur Babli’, and ‘Oye Lucky, Lucky Oye!”

Well, not quite a flattering portrayal of a nation of 1.4 billion Indians but the book encapsulates the major events and socio-economic changes in an easy-to-read essay format. It helps that Srinivas has been writing on these subjects for years and has even penned separate books on these topics.

If it meanders here and there, and some connections with films may seem forced, it is a quick read framing an India that has blithely swept aside socialism, Gandhism and spirituality out of the picture.

‘Reforms can be a dry subject’

On what prompted Srinivas to attempt this book, he says that for decades, he has been fascinated and intrigued by the connections between the real and reel, the links between popular culture and society, and the intellectual, psychological, social, economic and political bridges – both imaginary and constructed – between these two realms.

“Intuitively, I knew that the real and reel merge and converge in surprising and shocking ways,” he says. Also, he had read global and Indian papers, studies and books on these issues.

Some of them are mentioned in this book too, including the two papers by economist Bibek Debroy and academic Amir Ullah Khan, one jointly and the other individually by the latter, on connections between Hindi movies, political economy, and agriculture, he reveals.

In fact, Srinivas’ second book on the Indian middle class, ‘The Indian Consumer: A Billion myths, A Billion Realities’, had a chapter that described and analysed how this section was portrayed by Bollywood. It may be easy to match movies with broader subjects such as politics, economy or gender, caste, and class, but to embark on this exercise with economic ideologies like reforms, socialism or on the various inconsistencies that have emerged due to reforms can be challenging.

One of the big ironies that the senior journalist features in the book is that Indians generally associate market policies with wealth creation. But that is not true, he says.

“There is a huge mass of literature on how incomes and ownership of various assets zoom when a society embraces reforms. However, what we don’t register is that most of this wealth is fleeting and ephemeral since it is largely in the form of paper valuations, or the swinging prices of the assets (shares and real estate),” he says.

Hence, HCL’s Shiv Nadar and the protagonist in ‘Rocket Singh’ epitomise the generation of riches, and the decline of several business families like Dalmia, and Kapil Kapoor of King Chips in ‘Mantra’ represent how money can vanish into thin air, he adds.

Another major irony behind reforms is the fact that certain welfare schemes like MNREGA financially empowered women but at the same time, liberalised policies have forced a majority to stay out of the job market. Moreover, the state of the farmers, scandalously and deplorably, remains the same, which is portrayed in recent movies such as ‘Peepli Live’, ‘Matru Ki Bijlee Ka Mandola’, and ‘Kisaan’, he points out.

Further, even as reforms democratised an area like sports, especially cricket, it also facilitated people from underprivileged backgrounds to make it big, he says. But this also led to gambling, betting, match-fixing and spot-fixing to thrive. Cricket illegalities can be directly traced to developments due to market-oriented policies, he claims.

Reforms aided and abetted overall corruption at both the societal and individual levels, he states categorically. And, it is this grey, amorphous consequences of liberalisation that he manages to match with films that bring them to reel life. Reel and real seem to be in sync for Srinivas, most of the time at least.