The solar-powered Charkhas distributed among tribal women of the Melghat region have enabled them to generate independent income sources despite resource scarcity in the region. In a way, the combination of renewable energy coupled with Charkha has empowered them to become financially independent.

"Now I don’t have to work under the sun anymore. I can take care of my house and kids properly,” says Durga.

Another woman, Gopi, is elated about getting employment sitting at home.

And Sushila, who had to frequently migrate to other towns with her family in search of work, feels empowered.

“Now we don’t have to leave our village,” she exclaims.

All these stories are accounts of tribal women from the remote region of Melghat in the eastern part of Maharashtra.

They all have one thing in common — a solar-powered charkha (a domestic spinning wheel) at home and a great employment opportunity achieved through renewable energy and without incurring any additional investment.

It was the Maharashtra government’s initiative – Kasturba Solar Khadi Mahila Samiti - in a small village of Mandu in Melghat that provided them with a solar charkha, which can run on solar power for around eight hours a day continuously, and for at least two hours after sunset.

The programme aims to empower tribal women of the region with employment opportunities via renewable energy.

“I do the chores of the house, run the charkha, and also earn about Rs 100 a day. Previously I used to work in the sun on farms and earn the same amount of income. But now I can do both – housework and charkha – and earn while at home,” Durga, a resident of Mandu village, told The Federal. She was one of the first beneficiaries of the solar charkha.

Durga produces at least 1.5 kg of thread a day. “I start around 9 in the morning and run the charkha until 4 pm. Then I start with the housework,” she explains.

Gopi, a 24-year-old resident of Dharakot village in Melghat, is grateful to Kaka (Fulchand Savalkar), who is the coordinator of the Kasturba Solar Khadi Mahila Samiti in the region.

“We got a solar charkha for free only because of Kaka. He came to us during a survey and gave us the opportunity to be a part of the Kasturba Solar Khadi Mahila Samiti initiative,” says Gopi.

She has extended the business of solar charkha and got herself two machines. “Previously I had only one machine. Then I trained all my family members including my kids on how to run it. Now each of us runs the charkha,” she adds.

Her family produces somewhere between 2 to 3 kg of thread every day. This amounts to an income of at least Rs 200-300 a day for them. Her family now works on the fields only to produce crops for their own need. The rest of the income comes from the charkha.

The charkhas are simple to operate, and Gopi’s eyes sparkled as she explained the ease of her work. “We just have to keep monitoring and the machine runs on its own. I feel really great about it. It was very tiring working in the fields under the scorching heat. That’s why I don’t go there often,” Gopi exclaims. 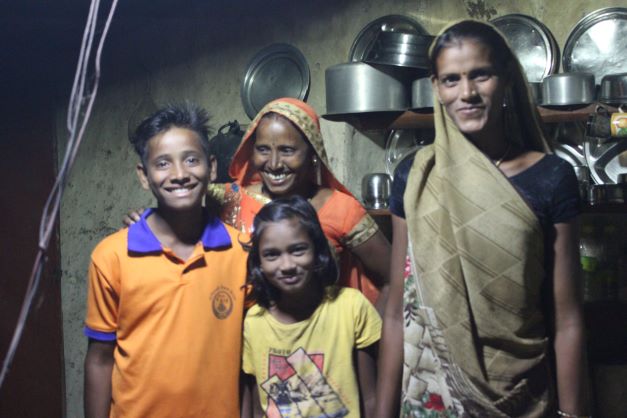 Gopi Mavaskar (L) and Sushila Patorkar (R) with their kids inside the house.

Sushila Patorkar, another resident of Dharakot, says: “We have been running this (charkha) for over three years now. I do both charkha and labour work.” She earns somewhere around Rs 2,500 to Rs 3,000 a month from the machine.

She recalled the old days when her family had to migrate to other places in search of work. “We used to work as labourers on farms or migrate for employment to other places before we got this charkha. Now we don’t need to leave our village. We can also choose to work both on farms or at home.”

“It’s a simple calculation. If we work, we get money, if we don’t then there is no money!” she adds.

Sushila, like most other women owning a solar charkha, is pleased that she has a choice. The ease and availability of employment at the local level is something they are satisfied with and many have happily opted to be part of the scheme. 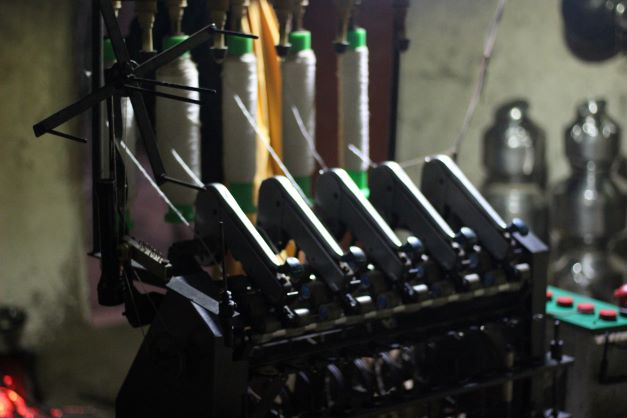 Most of the tribals focus on field work during the crop season followed by the monsoon, and for the remaining eight months they work the charkha.

Since the machine does not require electricity and runs on solar power, they have a reliable source of income. Basically, as long as the sun keeps shining, they can keep spinning.

In Dharakot, as many as 19 women have got the solar charkha installed at their homes.

Savitri Kashtekar who hails from Ghoti was excited to share her experience. “Fulchand Bhaiyya taught us how to run the charkha. Now that we have got employment inside our homes, we don’t need to go out searching for it.”

She further pointed to the benefit of solar power. “Even if we don’t have power (electricity), it doesn’t really affect our work. Somehow we manage to get our bread and butter from it,” she adds.

Savitri has three kids, a husband and a mother-in-law in her family. In the daytime, she cooks for the family while her husband helps run the charkha.

He further explained the business model saying: “We give them the raw material (cotton) and they return us the thread made out of it. The Kasturba Solar Khadi Udyog buys the threads at the rate of Rs 100 per kilogram by going to their homes. Payment is made on a monthly basis to the bank accounts of the women.”

The Udyog gets around 1 to 1.5 quintal of thread each month from all these charkhas together. “These raw threads produced by women across the villages are directly connected to the big loom. This reduces the time and effort put into creating thread in the main workshop. Thus, women are taking the process one step ahead and getting employment too,” he explains. 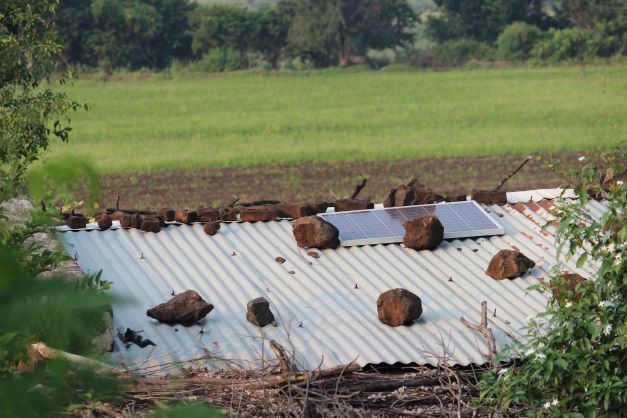 Solar panels installed on rooftops of houses of tribals

Around 60 of the 100 charkhas are functional as of today, he informs. “Some are not in a working condition while some women are not working due to crop season these days,” Fulchand adds.

The scheme is only for women. “Our people would go to other places in search of employment. So, we thought that if we give them employment at their homes they wouldn’t need to go out. Though they would earn less, they will live happily with their families,” he points out.

Even if a woman works for half a day on the charkha, she can earn at least Rs 50 which is enough to cover the food costs of the family, says Fulchand.

The Udyog plans to distribute 500 more such charkhas around these villages in the coming days.

Babusingh Dhulve, who works as a secretary at Gram Vikas department, told The Federal: “The benefit of giving the solar charkha is that they would not need to spend any money on electricity. They can run the business for free. Secondly, whole villages used to migrate for work and children were getting affected. With this initiative, the migration has stopped to some extent.”

(This story was funded by Earth Journalism Network)