When the ‘jury’ asked her, she presented before it the bangles, rings and chains that the men gifted her. She then listed before it the marks (including moles and warts) on their genital areas. The Sanskrit feature film Tayaa (By her) is based on the historic Smarthavicharam (trial of chastity) that took place in the erstwhile south Malabar region of today’s Kerala in 1905.

Historians say it was the last trial ordered by the Raja of Cochin into an allegation against an antharjanam, Savithri (aka Thathri), a young wife of 75-year-old Raman Namboodiri of Kuriyedath Mana in Thrissur. The trial lasted six months and the verdict was pronounced on July 13, 1905, indicting Thathri, and 65 men.

‘Smarthavicharam’ was a trial of procedure once followed by the Namputhiris if a girl or woman in their community was found guilty of adultery or sexual misconduct. Even though many literary pieces and art forms, including the national award-winning Malayalam film ‘Parinayam’ (1994), have highlighted this historic trial, the subject remains relevant.

Tayaa portrays how Thathri questioned male supremacy with her willpower and strength in a feudal society a century ago.

“I chose the subject mainly because it is the story of a woman’s fight against male supremacy using her body as a weapon. In Tayaa, I have characterized how Thathri used her mind to win over male supremacy and suppression. At a time when atrocities on women are on the rise, I thought such a historic fight should be brought to light in a fresh context,” says G Prabha, director of Tayaa. 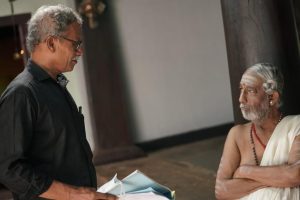 It is Prabha’s second feature film in Sanskrit, after Ishti which was the opening film at the International Film Festival of India in Goa in 2016. Ishti was the first Sanskrit film based on a social theme and it attained significance when it was screened at the prestigious Pyongyang Film Fest in South Korea in 2018.

Tayaa’s shooting is over, and Prabha is now busy with post-production work. Prabha’s idea to make movies in Sanskrit is to revive the ancient language which was once used and suppressed by the so-called elite class.

“It’s mainly because I love Sanskrit. Today, Sanskrit as a language is getting attention across the world. My first feature film in Sanskrit titled Ishti got global recognition, a reason why I chose Sanskrit as a medium,” says Prabha.

However, it was challenging to find a producer for a Sanskrit movie. Even after finding a producer, the second challenge was casting.

“One must understand the language well otherwise, one would not be able to express one’s feelings and gestures properly. Characterization of Thathri was difficult because hers was a fight using her body as a weapon. Pronunciation of Sanskrit words created stumbling blocks during the shooting, but my experience in the first feature film helped,” says Prabha, former head of the Department of Oriental Languages, Loyola College, Chennai.

The characters presented in the scenes have been divided into two parts: the ones before and after the interval are Thathri and her maid, her husband, a few accused men from different communities. The others are the Nambuthiri chiefs fixed by the Raja to conduct the trial and the representative of the Raja. “Equally important is the character of Arya Antharjanam introduced in this film as the real prey, victimized by cruel hands of power and desire for popularity. Thathri is presented in the movie as her advocate who takes up the prey’s case to avenge the predators,” he says. 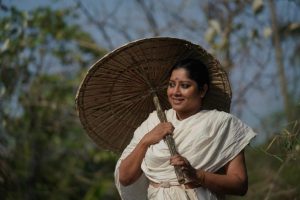 According to V T Bhattathiripad, the first known reformer among the Nambuthiris, Thathri is the first rebel to rise against the atrocities of the Nambuthiris who were the taskmasters and womanizers with high handedness in everything, with no concern for humanity. “The crucial element in the trial is proof. Unlike other literary pieces and movies, Thathri doesn’t experience sexual assault in ‘Tayaa.’ She was clever enough to collect strong evidence against the accused to substantiate their offence. Here she was scrupulous in collecting proof of the forced encounters from her friend,” says Prabha.

“Thathri presented as proof gifts such as bangles, rings and chains from the men involved and listed as evidence and distinctive personal body marks, such as moles and scars especially on the private parts of the men. And she used the presented pieces of evidence effectively to establish the veracity of her claims,” he added.

In 2020, Prabha with veteran cinematographer Sunny Joseph visited a dilapidated Mana in Kodanadu in Kunnamkulam. With cracks and colonies of bats inside, the ruined mana was ideal for the first part of the script. It is believed that Thathri stayed here for a brief period.

“I started writing the first scene based on the ruined building because it was ideal for the story. Six months ago, when we revisited the mana, we found it was renovated. We finally replaced it to its old ruined form using black paints and artificial sets,” says Prabha, who also wrote the story, dialogue and script for the movie.

Cinematographer Sunny Joseph who moved the camera for Tayaa says finding the right mix of light in the interiors of old Nambuthiri houses needed proper homework. “I normally prefer natural light, but here many shots were taken inside the interiors of the traditional Nambuthiri houses. A proper mix of light suitable to a century-old setting was important throughout the scenes shot at the interiors,” says Sunny Joseph, a National award-winning cinematographer.

Bharathapuzha (aka Nila), the second-longest river in Kerala, remains a mute spectator to the event. Prabha says he used the river with great importance in the movie.

“Bharathapuzha is a mute spectator to the event. After burning the hut, Thathri moves to the other bank of the river. I have used the river as an element of purification where Thathri cleanses herself and walks towards a new world of freedom,” says Prabha, who is planning to release the movie in August.