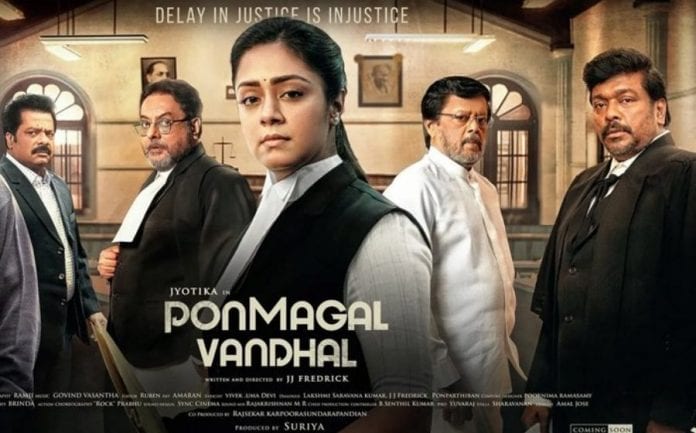 I must confess to some excitement at seeing a movie on the first day of its release, something I had not done in many years. “Ponmagal Vandhal (The princess has arrived)” also raised expectations as it was among the crop of eight commercial films slated for release directly on the OTT platform as all traditional cinemas are shut due to the COVID-19 pandemic.

At the end of two hours, after a fill of morbidity marred at times by juvenile screenplay, the film left behind a vague feeling of something missing in terms of satisfaction. The theme was powerful: Sexual abuse and a police encounter backed by a plot that is relevant in these troubled times.

However, debutant director JJ Fredrick could not resist resorting to the hackneyed and insufferable melodrama that Tamil movies are known for. There is no need for an individual to shed copious tears, spew out clichéd lines and generally turn near-hysterical for the viewer to understand that something tragic has happened. Sometimes, restraint can convey situations far more powerfully than an egregious show of sentiment.

Set in the picturesque hill station Ooty, the story is that of a young woman lawyer, Venba, who rakes up the police encounter killing of a woman 15 years earlier. The victim of the encounter is suspected of kidnapping several girl children, mutilating them before they are killed. The police action is met with widespread relief and approval. Venba goes against the grain and gets the case legally reopened in an attempt to re-examine the encounter threadbare.

The script makes an attempt to differentiate itself from the run-of-the-mill Tamil flick that usually would include action, romance and some songs thrown in. The attempt does not succeed as the director resorts to the typical stereotype of a villain (of Bharatirajaa vintage), an ostensibly conservative elder rich do-gooder Dr Jekyl behind whose benignity lurks a diabolical Mr Hyde.

Actor Parthiban, as renowned lawyer Rajarithanam, does come across fairly successful as a nonchalant yet smart counsel for the defence. He reminds one of a contemporary crop of glib lawyers who discount morality in return for fame and lucre.

Probably the saving grace is the court around which the film revolves. Pratap Pothen, with his vintage expressions and juridical pronouncements, is a natural in his role as the judge.  The court scenes could have been far more powerful than it actually is had the director resisted the temptation to, again, make it “filmi”.

Jyothika, as Venba, as the main protagonist dominates the show in a couple of parallel roles. One suspects whether the script, screenplay and everything else is woven to give her maximum play. Of course, this is a no-brainer as she is a co-producer along with her actor-husband Suriya. No doubt Jyothika, as Venba and as Jyoti, manages to hold the viewer’s attention with a range of display — from an impish girl to a devastated woman.

Notwithstanding this, the film’s makers could have had another actor for the second role to infuse variety and realism, but that would have meant sharing the honours.

There are films — some of which slice a part of life and recreate that truthfully on celluloid, as the European new wave cinema is known for. Or others which force you to suspend your disbelief for the entire duration of the show, like Hollywood.  Indian and Tamil cinema, in particular, either occupies several of these slots or falls in the gap between various categories.

One big disadvantage for filmmakers when movies are released on Amazon Prime Video, Netflix or Mubi is that any average watcher is exposed to the best of world cinema, especially at a time like now when the corona lockdown is in place for over two months. The viewer then tends to instinctively compare the film to what is available in the cyber-bouquet.

The outcome is that faults that would have somehow got subsumed when viewed in a large movie hall amidst a big crowd tend to painfully show up when seen in the comfort of a small living room.  Filmmakers, who intend to release movies on OTT, should ideally keep this in mind — their shenanigans will not be easily forgiven. It is good for cinema though, because the filmmakers need to fine-tune their act to match up to the best that is floating around the world in cyberspace.

Ponmagal Vandhal in some ways reflects the confusion of the filmmaker — whether to make it realistic, or to take refuge in the comfort zone so that the film does not ruffle any feathers, or to produce just a vanilla commercial. You have all three elements in the film and when it ends you switch off your gadget and wonder what it was that you just saw.

Was it a story about child sex abuse? Or was it a story about how the police compromise with the powerful? Or is it a story of how the judiciary comes under pressure where the high and mighty are involved? Or whether it is all about bad karma?  Take your pick, but for that, you will have to see the movie first. And I shall leave that to your discretion. No recommendations either way from my side.

COVID casualty: What movie theatres taught us about loving and livin...

Does actor Suriya nurse a secret desire to join politics?