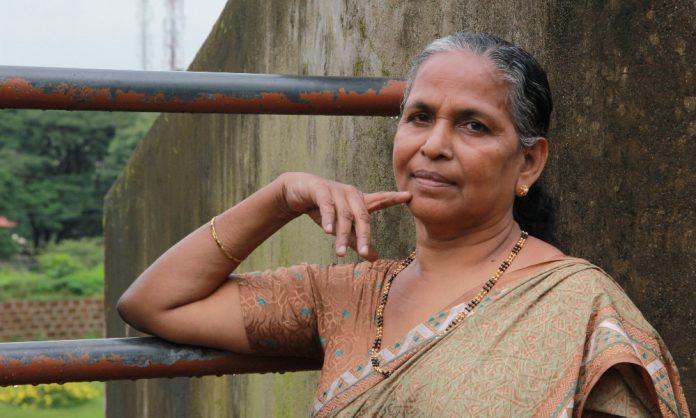 Nalini, who was made the coordinator of the Sex Workers Forum of Kerala in 2001, has raised many issues of the sex workers so far

When Nalini Jameela, a sex worker, published Oru Laingikathozhilaliyude Athmakatha (The Autobiography of a Sex Worker) in 2005, the book sold like hot cakes in three months, giving her the status of a best-selling author. A revised edition and two other books followed.

It was a turning point in the life of Nalini, who worked as a sex worker for more than four decades in Kerala. Nalini recently earned a special jury mention at the 51st Kerala State Film Award for costume design for the movie Bharathapuzha.

It was Nalini’s first assignment as a costume designer. The movie was based on the life of a sex worker and Nalini’s experience in the field came in handy.

Nalini, who landed the job by chance, is happy of having been recognised by a state government.  “It was unexpected. I am grateful to the state government for recognising people like me,” she says.

Nalini has known Manilal, the director of Bharathapuzha for the last 23 years.

“When he asked me to help him, I thought what he meant was acting. I can’t act as I failed miserably a couple of times. Since the story was based on the life of a sex worker, Manilal wanted my help in choosing the costumes. And that’s how it all began. We went to a big textile unit and bought the costumes,” says Nalini.

The cine crew wanted expensive clothes, but Nalini told them what a sex worker would prefer to wear. “A sex worker normally prefers hard colour in the night and light refreshing ones in the day. We normally go for the cheaper ones. I had to convince the crew with reasons as they were not aware of the reality,” she says.

After shopping, Manilal asked Nalini whether she could stitch it.  For Nalini, it was unexpected but she said yes.

“Even though I was new to costume design in movies, I had a clear idea about the traditional as well as modern dresses that people normally wear. The project was getting delayed due to various reasons. It helped me in a way as I got enough time to experiment on myself. My own experience as a sex worker helped. I am happy that I could finish the job well.  It was during the promo of the movie that I first saw my name as ‘costume designer’. It was a great feeling,” says Nalini.

Nalini became a sex worker at the age of 24 after her husband’s death in the mid-70s. The two-and-a-half rupees she was earning from a clay mine was not sufficient to make ends meet. Added to this, her mother-in-law demanded a large sum from her to take care of her two children.

Frustrated, Nalini even thought of sending them to an orphanage. But her friend advised her to meet one Rosa chechi (elder sister in Malayalam) of Thrissur, who could help her get a reasonable income. And that was the beginning, and the journey went on for more than four decades.

“Prostitution is like any other profession. Today you see fathers selling their daughters, men enjoying family life despite being regular to brothels. So why only sex workers are blamed?” Nalini asks.

Nalini, who was made the coordinator of the Sex Workers Forum of Kerala in 2001, has raised many issues of the sex workers so far. Nalini changed her name to Jameela after she married Shahul Hameed, to get the nod from his Muslim parents.

Nalini has published three books so far. The Autobiography of a sex worker is a first-hand account of the struggle of a woman caught between prostitution and motherhood.

In her second book, Romantic Encounters of a Sex Worker (2018), Nalini wrote about some special clients she still remembers — for their gestures, smile, generosity, courage or even crookedness.

“Prostitution is not always just a give-and-take relationship, it’s something beyond that,” says Nalini, who wrote the second book to clear doubts in society about sex workers and also to add something more to her old work.

In the third book, Oru Lyngikathozhilaliyude Pranaya Pusthakam (The Love Book of a Sex Worker), Nalini talks about some of her special love affairs and her life, after publishing her autobiography in 2005.

Nalini says that she has come across a number of clients for whom sex is something that they enjoy without knowing the face. “But there are exceptions. I always wanted to write about eight clients who were special to me, those who saved me from thugs who tried to rob me in the night. If it was just a relationship based on money, then they could not have bothered to save me,” she says.

At the same time, Nalini realised that men can be both tender and cruel at the same time, a lesson she learnt from her encounter with her first client, a police officer, during Emergency in 1974-75.

“He looked like an aristocrat, not like a policeman… His behaviour towards me that night was very tender. It lasted just one night…This was the person I had dreamt of, the lover who appeared in my fantasies. The same handsome man handed me over to the police in the morning. Men can be both tender and cruel at the same time. I learnt that lesson from my very first client,” writes Nalini in The Autobiography of a Sex Worker.

Even though Nalini has written three books, writing has not become an obsession for her.

“It is true that writing helped me earn some money. But my identity is not going to change if I write more books. I am what I am. I don’t see any difference between earning as a sex worker and as a writer,” she says.

However, Nalini will continue as a costume designer if she gets the chance. “I am not an expert in costume designing. But I am confident. I will continue to design costumes in movies if I get a chance,” says Nalini, who lives with her daughter in a remote village in Tamil Nadu.

At 69, Nalini now dreams of constructing a ‘Snehaveedu’ (Home of Love) for destitute sex workers in Kodungallur in Thrissur district of Kerala.  “There are many elderly sex workers who are literally on the street. There is no one to take care of them. I want to construct a shelter for them. Talks are going on. I hope it will happen soon,” says Nalini.