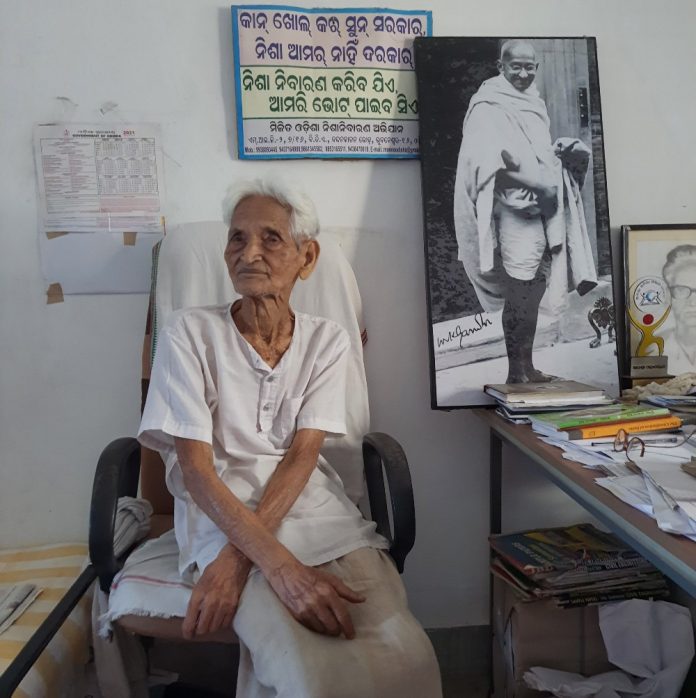 The Odisha-based Padmacharan Nayak, an ex-MLA, has limitless zeal and vigour to carry on his battle against liquor

In 1942, days after the Quit India Movement was flagged off under Gandhiji’s leadership, like other students of Bana Bihari High school in the sleepy Kujang town of Odisha’s Jagatsinghpur district (then under undivided Cuttack district), Padmacharan Nayak, a tenth grader, stayed away from class for four months. His eyes light up as he reminisces about the past, “I thought I wouldn’t be able to study ever again, but I wasn’t sad. It was a different era, everyone was nurting dreams of an Independent, beautiful nation.”

Close to eight decades later, though on the wrong side of the nineties, this Gandhian, columnist, and ex-MLA, hasn’t stopped crafting dreams in his mind. Nor has his spirit wavered for even a bit. Defying age, he is spearheading another struggle: to make India liquor free.

“Sadly, everything went haywire. Today, liquor is the biggest threat to our society, culture, economy and democracy. From Panchayat to Parliament, total prohibition has to be part of every election campaign. Our struggle will continue till there is a complete ban on liquor in the country,” says this prohibition activist.

Travelling around the country, Nayak has tried to mobilise people of eminence across all spectrums as well as political leaders that include among others, several Chief Ministers and Prime Minister Narendra Modi, to realise his dream for a liquor-free India.

“In 2018, I requested PM Modi to be associated with the cause, which is the need of the hour,” Nayak says, adding that he had discussed the issue with RSS chief Mohan Bhagwat in Bhubaneswar as well. “We have tried to convince everyone, but nothing much has happened,” he says with a twinge of sadness. 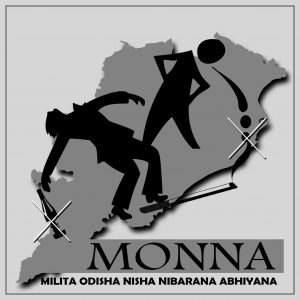 Since 2013, under Nayak’s leadership, activists of Milita Odisha Nisha Nibaran Abhijan (MONNA), a social forum comprising members from all walks of life, have already reached out to 3,000 villages in 180 blocks across 27 of Odisha’s 30 districts to promote prohibition. Nayak himself has visited villages in 23 districts.

Apart from sensitising people of all ages and students, they have staged peaceful protests, held rallies, created awareness campaigns in different localities including far-flung, inaccessible tribal pockets and carried out signature campaigns.

“Everywhere, we have been overwhelmed by people’s response. Particularly the women, the worst victims of liquor, are at the forefront. Many villages have already banned liquor too,” claims Aparna Nayak of MONNA.

Incidentally, in 2016, they had submitted signatures of five lakh people to Odisha CM, Naveen Patnaik. The nonagenarian Nayak recalls urging Patnaik to enforce the Odisha anti-liquor law passed way back in 1956 by eminent Gandhian leader and former Odisha CM Nabakrushna Choudhury. He claims that Patnaik had said that he will look into it.

“We had collected over fifteen lakh signatures. The packets containing the papers were too heavy to carry, so we submitted only five lakh signatures,” remembers Tripathy of MONNA.

Nayak singles out Bihar Chief Minister Nitish Kumar and praises him. “Kumar deserves all credit, he has stood by his word,” says Nayak, who had won from the Rajnagar Assembly seat (under Kendrapara Lok Sabha constituency) as an independent candidate in 1961. His election expenses amounted to ₹1,550.

The veteran activist rues that COVID-19 pandemic was an opportunity for both the Centre and the state governments to ban liquor completely, but both have failed due to lack of political will.

However, unfazed, the nonagenarian is trying to catch up with time lost due to the pandemic. Staring at the framed photo of Mahatma Gandhi sitting on the table next to him, he adds softly, “We have a lot of work to do, a long way to go, so we need to hurry up.”

Nayak’s tall, frail body neither belies his mettle nor his resolve. He climbs the stairs to his second-floor room easily. If he has a job in the radius of 2-3 km, he prefers to just walk the distance. Before COVID-19, he could be seen cycling around Bhubaneswar.

“I am fond of cycling. During my youth, I used to cycle from Marshaghai (in Kendrapara) to Bhubaneswar (approximately 100 km). I want to ride it, but have been advised not do so due to busy roads,” Nayak says with a boyish grin.

Also read: A student couple returns to guru with ₹340Cr aid to set up cancer facility

Nayak fondly recollects his post high school years at Cuttack’s Ravenshaw college, from where he completed his Masters in chemistry. During those years, he had the opportunity to have a glimpse of Gandhiji at the Cuttack Railway station. He had a brief meeting with Jayaprakash Narayan too. “Whenever, Jayaprakashji visited Cuttack he stayed with his close friend and our chemistry professor, Balabhadra Prasad. I had the privilege of a brief interaction with him there,” Nayak recollects.

Tripathy shares that their movement survives on the entire monthly pension of Nayak and individual donations from some like-minded people. A leading public sector bank has helped them by providing a Bolero.

Nayak, who has worked as a journalist in the Soviet Information Department in Delhi, is aware of the tough journey ahead. “Yes, there are difficulties. But we will be successful, one day, surely. It doesn’t matter if it does not happen during my lifetime,” he points out.

Nayak’s confidence is bound to stun anyone. Former Odisha Finance Minister and senior Congress leader Panchanan Kanungo, who knows Nayak for several decades, says, “What he is doing today is unbelievable. He is an amazing personality; his zeal has remained undiminished despite his advancing years.”

German resilience triumphs in high-quality Wo...