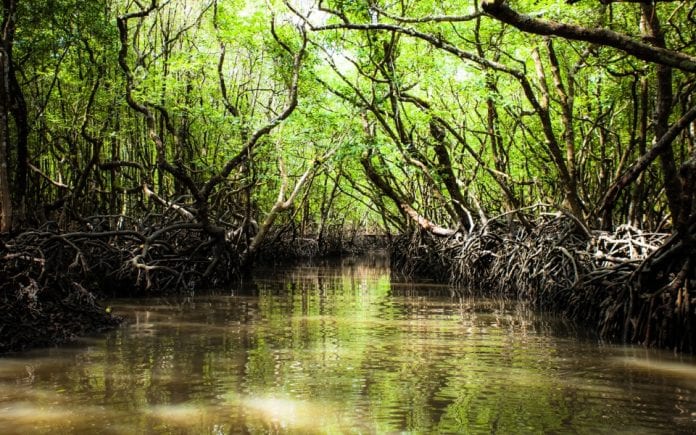 On the positive side, researchers theorise that the “cyclones may be having a net positive effect on mangrove GPP by intermittent, excessive nutrient supply.

Tropical storms, in the last 21 years, have had an overall positive impact on the ability of mangroves in India to fix carbon dioxide, a key climate-warming greenhouse gas, says a study.

Researchers at the department of geography at the University of Georgia in the United States, looked at how mangrove productivity or carbon assimilation (indicated by Gross Primary Productivity or GPP) had changed over 21 years and if tropical cyclone frequency or intensity played a role in this trend. The driving motivation was to explore the resilience of mangroves in India by looking at how storms have impacted GPP in the past.

They examined satellite-datasets of GPP for seven mangrove sites along the east and west coasts of India, from January 2000 to July 2020, finding that there is a net increase in GPP for all mangrove sites, and especially for the east coast mangroves which are more frequently hit by cyclones compared to the west coast.

The seven mangrove sites from the east to the west coast explored in the study are: the Sundarbans in the Bay of Bengal; the Bhitarkanika mangroves and Mahanadi delta mangroves in Odisha that saw the 1999 super cyclone and subsequent events such as cyclones Fani and Yaas; Pichavaram mangroves in Tamil Nadu flanked by Vellar and Coleroon estuaries of the Cauvery delta which lessened damaging impacts on neighbouring villages from the 2004 tsunami; urban mangroves patches of Mumbai (Gorai) and surrounding rural coastal belts in Maharashtra (Uran); and the bird haven of Chorao in Goa.

While the researchers theorise that the “cyclones may be having a net positive effect on mangrove GPP by intermittent, excessive nutrient supply,” cyclones could have an opposite effect by negatively affecting carbon burial rate and a declining soil organic carbon (SOC). “We do not have data to examine the SOC trend for the same time period, but that could form a part of future research.”

Gaps need to be plugged in the lack of long-term measurements to unravel how the carbon balance in mangrove forests is likely to change with climate change.

“If cyclone frequency and intensity exacerbate with progressing climate change, mangrove GPP may continue to increase like the paper suggests or even plateau or decrease but we can’t say for sure as long-term measurements are lacking and how mangrove forests may experience changes in carbon balance is not well understood,” Rasquinha said.

“Essentially, it is possible that with the ongoing increasing trend in GPP that we observe, a tipping point may reach because of more intense or more frequent storms, and we do not know at what point that tipping point might occur that can decrease GPP,” observed Rasquinha.

One way to address these gaps, the authors suggest, is to invest in the establishment of a network of specialised measuring towers (flux towers) across the country to check how an ecosystem is doing at the local level. These towers measure how carbon dioxide and other gases are exchanged between soil–vegetation–atmosphere in the long term in what is known as the eddy covariance method, an atmospheric measurement technique.

Several such towers have been set up in several natural ecosystems in India including the Pichavaram and Sundarbans mangroves. Climate scientist Supriyo Chakraborty, who is not associated with the study, agrees that that eddy covariance-based GPP estimation and specific investigations (soil nutrient levels and the photosynthetic activity just before and after a cyclone) would help in drawing conclusions on the hypothesis on impacts of cyclones on carbon assimilation in mangroves.

“Studying a one-to-one correlation, for example, a cyclone event and a corresponding increase in primary productivity (soon after that event) would give a clearer picture. This should be observed for several events,” said Chakraborty who is associated with the execution of the Indian government’s MetFlux India Project aimed at gathering data on changes in carbon dioxide, energy and water vapor exchange between terrestrial vegetation and the atmosphere.

The authors also recommend developing mangrove forest research and education field stations across the country. They recommend increasing collaborations with national and local laboratory facilities and investing in laboratory capacity across field stations to conduct mangrove vegetation studies in the field. They also speak in support of training interested local communities in conducting field and lab research through accredited certification programs and appropriate compensation. They stress on expanding open-source data sharing of mangrove research, deploying autonomous instruments and tools, and building research networks to collect and analyse mangrove ethnoecological data.

Sea-level rise, coastal developments, and frequent tropical cyclones shape India’s mangroves that constitute three percent of the world’s mangrove forests. The latest Intergovernmental Panel on Climate Change (IPCC), has laid a strong emphasis on the increasing likelihood of compound climate extreme events which are the combination of multiple drivers and/or hazards that contribute to societal or environmental risk. Compound flooding (a storm surge in combination with extreme rainfall and/or river flow), that rousts mangroves, is one example.

“Some studies have found that productivity can show an increasing trend with more species diversity. Some species do well after a disturbance event through their quick regeneration ability whereas some are more susceptible to damage,” explained Rasquinha.

Similarly, species zonation patterns (where a species is found along the coastal/estuarine belt) can also determine salinity/freshwater tolerance or requirement of certain species and influence their carbon storage potential,” she said.

Because mangroves also pay a high price in standing guard against storm surges, for Odisha, the most cyclone-prone state in the country which witnessed the devastation of the 1999 Supercyclone, researchers advise planting mangrove species that have more carbon dioxide assimilation capacity and can adapt to changing environments after cyclonic storms in the Bhitarkanika Wildlife Sanctuary and its southern part, the Mahanadi mangroves.

“After cyclones, the salinity and nutrient profile of the substratum change and there is an increase in soil organic carbon. The biomass of the species that are sensitive to these changes starts deteriorating whereas others are more adaptive to these after-effects of cyclonic storms. We should opt for planting mangrove species that have more carbon dioxide absorption capacity and are more adaptive to the changes after cyclones to mitigate climate change,” explained Kakoli Banerjee at the Central University of Odisha, Koraput, who has worked on carbon cycling in the Bhitarkanika and Mahanadi mangroves in Odisha.

Climate change adds to the expanding pressures on Bhitarkanika’s and other Indian mangroves. While Bhitarkanika boasts of dense mangroves in a protected area and is a prominent crocodile nesting site, recently, environmentalists have warned against dipping freshwater levels in Bhitarkanika due to the planned diversion of fresh water to supply a mega water project. The Mahanadi estuarine system with moderately dense mangroves faces constant pressures from human actions, including industrialisation.

On the west coast, the Maharashtra government’s Mangrove Cell is working towards building its database on mangrove carbon sequestration; they’re working on understanding to what extent the mangrove cover lessened the impacts of cyclones Nisarga and Tauktae on the coastline in the Raigad and Ratnagiri districts. Mangroves in Maharashtra span 20 species across 300 square kilometers.

According to Manas Manjrekar, Deputy Director, Research and Capacity Building at the Mangrove Foundation of the Mangrove Cell, “The carbon sequestration project will map how much carbon is stored in the mangroves across the state. And the findings of the study on impacts of the cyclones of the mangrove-fringed coastline will help us evolve an effective shoreline protection policy.”