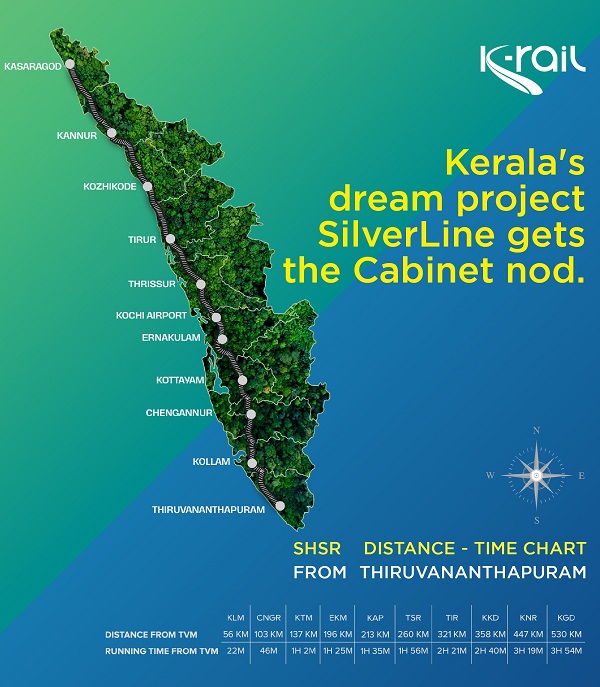 A route map of the proposed Silver Line project. Photo by K-Rail.

Kerala’s Silver Line project, a semi-highspeed railway line that proposes to connect the north and south of the coastal state, could bring an unimaginable disaster to the fragile ecology of the region.

For instance, the Madayipara Biodiversity heritage site in North Kerala’s Kannur district is a laterite hillock surrounded by Kuppam, Ramapuram and Peruvamba rivers and the ecologically fragile Kavvayi backwaters. According to Muhammed Jafer Palot of the Zoological Society of India (ZSI), the hillock is home to 657 plants, 142 butterfly species, 186 bird species and 60 species of odonates. It also has 24 species of reptiles and 19 species of amphibians, which are rare and endangered ones. Though the hillock represents less than 0.01 percent of the Kannur district, it harbours 58.75 percent flora of the district.

About 132 kilometres south of Madayipara is the Kadalundi bird sanctuary and its estuarine ecosystem. A little away from Kadalundi, the highly ecologically sensitive Ponnani-Thrissur Kole wetlands remain spread in over 13,632 hectares, which are considered the third largest of their kind in entire India, after Chilika Lake (Orissa) and Amipur Tank (Gujarat), in terms of the number of birds it supports. Ornithologists note that 241 species of birds, including passerines, have been recorded in these wetlands, of which 30 percent are migrants.

Close to Ponanni lies Thirunavaya, a village with numerous ponds, lakes, and wetlands. Here, over 30 families meticulously tend lotus flowers to supply to different temples in the state, including the famous Sri Krishna Temple in Guruvayur.

Experts observe that the environmental, social, and financial equilibriums of Madayipara, Kadalundi, Ponnani, and Thirunavaya would be badly affected along with numerous other villages between Kasargod in north and Thiruvananthapuram in the far south if the project goes through.

The Silver Line project that begins from Thiruvananthapuram will have stations in major towns and cities of Kerala including Kollam, Chengannur, Kottayam, Ernakulam (Kakkanad), Cochin Airport, Thrissur, Tirur, Kozhikode, Kannur and the journey will end in Kasaragod town. According to the plan, the proposed station in Kozhikode will be underground while Thiruvananthapuram, Ernakulam, and Thrissur will have elevated stations and all the other stations would be at grade. The Cochin International Airport Limited (CIAL) has already offered one acre for the station there.

Soon after returning to power in the recently held state elections, Kerala Chief Minister Pinarayi Vijayan-led Left Democratic Front (LDF) government declared that the project would be a priority for his government as it would connect state capital Thiruvananthapuram with Kasargod district in four hours which under the existing railway system takes more than 12 hours.

But the project has led to environmental, social, and financial concerns and many are doubtful of the project’s viability. Some believe that it could cause a large-scale displacement in Kerala, a state known for its high density of population. The project already has approvals from NITI Aayog and the Union Government.

Environmental and social concerns around the Silver Line project

The project needs 1,383 hectares of land, which will include large tracts of wetlands, forest areas, backwater regions, residential areas with a high density of population, rice fields, and existing building spaces.

As per the estimates of NITI Ayog, the compensation for land acquisition alone would come around Rs 281.57 billion (Rs. 28,157 crore). Agencies including Japan International Cooperation Agency (JICA), Hudco, Rail Finance Corporation, and Kerala Infrastructure Investment Fund Board (KIFB) would lend out the money required for the implementation of the project. The trains on the new line, once completed, are expected to travel at a speed of 200 kilometres per hour against the existing 80-90 km per hour.

The government had initially said that the new line would be constructed parallel to the existing line but the present alignment at many locations is up to four km away from the existing line which will result in large-scale land acquisition. K-Rail managing director V. Ajith Kumar told Mongabay India that the changes in alignment were facilitated to avoid massive twists and turns and to make the route a straight line. Kerala Rail Development Corporation (K-Rail) is a joint venture of the Kerala government and union railways ministry.

Though Ajit Kumar terms the Silver Line project as a significant leap forward in the state’s infrastructure development over two dozen action councils have been formed across the state to protest the unilateral implementation of the project.

But environmentalists point out that no proper scientific, technical, social, environmental, and economic impact studies have been done for the project.

Kerala’s noted environmentalist R.V.G. Menon stressed the project would “have adverse impacts on the Western Ghats as it would require enormous amounts of granite and loose soil.”

“In Kerala, all granite quarries are in the Western Ghats. As the line must cross wetlands, rivers, rice fields and lakes, the project requires large-scale land reclamations. Numerous bridges planned as part of the project would require huge amounts of granite, sand, and soil. Considering the costly project’s social, environmental, and financial impacts, it is a white elephant,” Menon told Mongabay-India.

He said the government must backtrack from the project and prove its commitment to the people of the state who are now reeling under the adverse impacts of climate change and environmental destruction caused by large-scale projects with little or no benefits to the whole state.

However, Kumar notes that the project will reduce road congestion, accidents and fatalities, greenhouse gas emissions, produce employment opportunities, integrate airports and IT corridors, and lead to faster development of cities that it will pass through.

Not everyone is convinced. Santhosh Thannikkat, an expert who researched the project’s feasibility, emphasises that the new alternative line is getting mooted when even the existing rail lines in the state are remaining underutilised.

Thannikkat explains that Kerala’s travel woes can be addressed considerably by initiating steps to complete the pending rail infrastructure projects in the state as he pointed out that even the doubling works of the track between Kottayam and Alappuzha are incomplete for more than two decades.

“It is undoubtedly a costly project. As Kerala is well connected with five airports and neighbouring airports of Coimbatore and Mangalore, cheap flights are a far better option than an expensive high-speed railway, attracting only very few travellers. There is no guarantee that the new line would get more travellers as most people in the state prefer better connectivity to Bangalore and Chennai than the state’s interior areas like Kasargod,” Thannikkat claimed

On the criticism that the project would kill many paddy fields in the state, the authorities state that they will construct elevated paths in such areas and assured that there would be efforts to minimise the environmental and social impact of the project as much as possible. Sources in the government dismiss the opposition to the project and point out that the land acquisition would be done in accordance with the 2013 Land acquisition Act.

Over the last few years, similar concerns have been repeatedly made against the Indian government’s flagship Mumbai-Ahmedabad bullet train project. Experts have said that the project will result in environmental and social issues and instead the government should focus on strengthening and optimum use of the present infrastructure.

Is there an alternative?

Environmental collectives like Kerala Paristhithi Aikya Vedi have demanded evolving of more sustainable alternatives at a lesser cost before taking this ambitious but expensive project of Pinarayi Vijayan. “Rs. 640 billion (Rs. 64,000 crore) is indeed a huge amount. The total expense of the project would be more than double what the government expects now on completion. It is being enforced in a state that is facing severe floods, deluges, land landslides, and sea erosion every year. Cost-effective alternatives must be probed, and consultations with experts with authentic and independent stand must be initiated,” said noted environmentalist Sreedhar Radhakrishnan, who is also associated with Kerala Paristhithi Aikya Vedi.

He said that the project would be a hydrological disaster as it would prevent water flow from the Western Ghats to the Arabian sea during floods and monsoons. He noted that what Kerala requires, at present, is environment-friendly projects that benefit the maximum number of citizens and with less investment.

In fact, the Aikya Vedi has said that standalone projects like Silver Line would spell doom for the state’s public money and resources.

“For over five years, the state is reeling under alternating drought and floods. There will be increased potential for disasters if the Silver Line project is implemented. As far as Kerala is concerned, it requires sustainable development models which can be based on lessons the state learned from the consecutive flood and related natural disasters,” Usha Soolapani of the environmental activist group of Thanal told Mongabay-India.

Meanwhile, the Kerala Sastra Sahitya Parishad (KSSP), a popular science movement that maintains links with the ruling LDF, recently said: “It is certain that the project will render thousands of families across the state homeless. We must anticipate possible backlashes in the event of mass eviction of people who are still reeling under the pandemic.”

“As far as Kerala is concerned, the best option is to forgo the Silver Line project and take up the modernisation of the existing railway network and implement diverse, sustainable projects,” it said.

Instead of going ahead with the controversial Silver Line standard gauge project, A.P. Muralidharan and K. Radhan, KSSP’s president and general secretary, said the state should push for doubling the existing rail tracks and electronic signalling rail network.