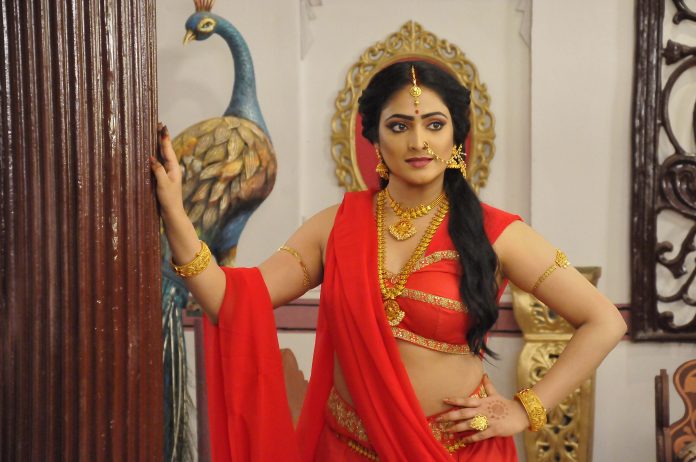 Haripriya in Amruthamathi: The success of Amruthamathi is a recognition of Kannada literature, culture and cinema at national and international cine circuits, said Prof Baraguru, who has directed 21 Kannada films

An experimental Kannada movie – Amruthamathi – has created a record for being screened at ten International Film Festivals across the world.

Through Amruthamathi, Prof Baraguru Ramachandrappa popularly known as Baraguru in literary and film circles, has strived to explore the problems of crime and punishment and the problem of freedom of choice given to human beings. The story is based on the 13th-century classical text Yashodhara Charite (c.1209) of classical poet Janna, which deals basically with Jain tenets through mythology.

Significantly, this magnum opus, which is one of the prominent Kannada literary texts, has received serious critical attention for centuries by critics of different schools. Many creative writers have tried to restructure the story with different perspectives in recent years.  Noted playwright and filmmaker Girish Karnad reinterpreted the text in his own way through his play Hittina Hunja (Bali in English).

Baraguru has looked at the complexity of this classical Jain text, through the nuanced interplay of binaries; indulgence and happiness, people and the state, freedom and confinement, through the eyes of Amruthamathi – the protagonist of Yashodhara Charite.

This text essentially deals with depraved sex and its resultant violence, besides offering cautionary advice on the issue of extreme desires. Baraguru brilliantly used folk elements (folk song of Ashtavanka – ugly mahout) as a metaphor to represent the ordinary people and princess Amruthamathi’s (who is suffocated in the golden cage of the palace) longing for them.

The most sought after leading actress of Kannada cinema, Haripriya, has essayed the character of Amruthamathi and bagged the Best Actress award for her performance at the Noida International Film Festival.

A rebel by nature, an advocate of social causes

Being one of the prominent progressive writers of Kannada literature, Prof Baraguru is well known for his analytical and introspective articles on contemporary events, which have triggered many cultural and linguistic debates in the last four decades. Even at 74, this writer-turned-filmmaker is being looked upon as a model writer, thinker, a champion of social causes by the younger generation of Kannada writers.

For writer and thinker Prof Baraguru, engagement with the visual medium is partly driven by his concerns for social issues, which he professed through his writings. The writer has to his credit 11 novels, 6 poetry collections, 3 short story collections, 2 plays, and 12 research works, and several scholarly write-ups on language, culture and society.

Also read: Covid, death warrant for some; lifeline for others in Kannada filmdom

He has been awarded by the Karnataka Sahitya Academy for his research and criticism, which focusses on class-based society and its challenges. He is the recipient of the prestigious Pampa award instituted by Government of Karnataka. Considering his contribution to literature and social concerns, Kannada Sahitya Parishat had chosen him to chair the 82nd Akhila Bharata Kannada Sahitya Sammelana held at Raichur in 2016.

In fact, Baraguru headed the literary institution – the Karnataka Sahitya Academy and chaired the Kannada Development Authority. Besides that, he guided the governments on various issues concerning culture, language, literature, cinema, and education. He headed the Cultural Policy Committee of Karnataka, which was the first of its kind in the country, and submitted the most comprehensive recommendations.

A kind of rebel by birth, he was one of the writers, who led the Bandaya Literary Movement in the late 70s, which emerged as an opposition against the established literary canon and a voice of the oppressed (The movement marked its beginning by organising Bandaya Sahitya Sammelana in 1979). Recently, he tried to revive the movement, which lost its vigour with time.

He felt that there is an urgent need to breathe new life into the Bandaya literary and cultural movement, at a time when concerted attempts are being made to silence the voice of dissent and democratic dialogue has almost become impossible.

Baraguru grew up watching films of Dr Rajkumar and Akkineni Nageshwara Rao in tent screenings at Baraguru, a village in Sira taluk of Tumkur district (Baraguru is a village bordering Andhra Pradesh). Initially, he dreamt of becoming an actor. But, his association with stalwarts of Kannada cinema, such as Siddalingaiah, K M Shankarappa and N Lakshminarayan inspired him to become a director, instead of an actor.

Interestingly, Baraguru did not apprentice under any of these filmmakers. He learned the craft by watching films, and reading film scripts (such as Satyajit Ray’s Pather Panchali ) and watching film shootings in and around Bengaluru during the 70s.

In the late 70s, he decided to try his hand in filmmaking and with the support of his family and friends he made Ondu Oorina Kathe, which is based on his own short story. Since no producer came forward to make a film on a story, which was dear to his heart, Baraguru borrowed a loan from a commercial bank to make this film. But unfortunately, the film failed to recover the costs and Baraguru had to repay the loan from his meager earnings as a teacher.

But, undeterred by the failure, he did Benki with the support of YSV Datta, a teacher-turned-politician. Though Benki bagged Karnataka State Film Awards, the film miserably failed at the box-office. Finally, Baraguru got recognition as a filmmaker from his third film Surya (starring Rohini Hattangadi of Gandhi fame).

Baraguru’s plight in releasing his films in theatres is similar to many new wave filmmakers. Every one of his films struggled to make it to cinema houses. But, Baraguru who can be described as an adventurist in life opted for an alternative channel.

When Shanthi did not have any takers for a theatrical release, he took a Jaatha from Belagavi to Bengaluru to screen the film in major towns. He took one print of Shanthi and screened that at select theatre auditoriums which were meant for stage plays.

“I am happy that over 50,000 people watched the film by the 30th day of the Jaatha,” recalled Baraguru, attributing the failure of the film society movement in Karnataka due to the problems being faced by creative filmmakers. Shanthi however entered the Guinness Book of World Records in the category of having the “fewest actors in a narrative film”, as the film features only a single actor (an illustrator and a painter called Shanthi).

Also read: Poet in exile, opium, a stolen manuscript: Va Ra’s biography has it all

For actor Bhavana, being the sole actor in Shanthi is one of the highlights of her film career, as she received appreciation for her performance from the United Nations. Bhavana also got the Best Female Lead award for her role as a woman who sacrifices her life for the sake of the village in Bhageerathi, another one of Baraguru’s important films.

Even his Hagalu Vesha, an ambitious project starring Shivarajkumar, did not fare well at theatres because of the confusion created by distributors and exhibitors during the release. But Janumada Jodi (based on a famous novel of Gujarati writer Pannalal Patel, starring Shivarajkumar) for which Baraguru wrote dialogues and assisted in the story and adapting the film to Karnataka’s culture, was a big hit at the box-office. Besides working on his own films, Baraguru wrote the script, screenplay, dialogue, and songs for other filmmakers, who sought his intellectual output.

Baraguru raised contemporary issues in all his films. According to critics, as Baraguru is a teacher by profession and writer by obsession, his films are more oral and have less visual quality. But Baraguru said that all his films are not slow, as being accused by critics. Citing his other film Kote, he said, it did not have any dialogue and Shanthi was a silent film.

Also read: On films and global political discourse, the paradox that is India

Disturbed by the total socio-economic change in the society because of globalisation, privatisation and liberalisation, he made the film Thaayi, based on Gorky’s eponymous work Mother. “The present situation in the country made me re-evaluate Gorky’s work Mother, one of my favourites. The situation in the country now is no different from the pre-revolutionary situation in Russia. The poor and the working class are exploited by the capitalist class and they want to establish a colonial Raj. Globalisation, privatisation, liberalisation and the corporatisation have become the tool for exploitation in the name of reforms. I tried by best to present contemporary India in Thaayi”, he observed.

In Kerge Haara, one of his classics, Baraguru has reinvented, re-evaluated popular north-Karnataka folktale and raised the issue of dwindling water-bodies, and stressed the need for protection of lakes and communities’ rights to access them. Instead of portraying anyone as the antagonist, the filmmaker shows that everyone is a victim of a value system bound by tradition and blind belief.

Bhagirathi’s subject is similar. His Marana Dandane (capital punishment) is also based on his own story and the film was screened at the 10th Habitat Film Festival, New Delhi.  Besides making feature films, Baraguru carved a niche for himself as a documentary filmmaker too.

Baraguru’s rebel nature, it appears helped many new-generation filmmakers. He took legal recourse to question the anomalies in the policies formulated by the Central and State governments in selecting films for screening in the Panorama section of International Film Festivals and in according National Film Awards.

“Because of my petition, the Union Government has changed the film award policy and following the direction of the Karnataka High Court, policies pertaining State awards and subsidy were amended,” said Baraguru with a smile.

For Prof Baraguru, the successful journey of Amruthamathi is “a recognition of Kannada literature, culture, and cinema at national and international cine circuits”. Having directed 21 Kannada films in his four-decade film career, Baraguru is still enthusiastically working on his next project. But, the pandemic, which is plaguing the country is also coming in the way of Baraguru’s plan to make a film on Kasturba Gandhi.

“The script is ready, had COVID-19 not disturbed the society, I might have started shooting by this time. I will resume filming once normalcy is restored,” said Baraguru with a broad smile.