In the 1961 Hindi film classic, ‘Ganga Jamuna’, two brothers are pitted against each other. Actor Dilip Kumar plays the elder brother, Ganga, who has a heart of gold but is wronged by an evil zamindar and ends up joining a group of bandits.

While, his younger brother Jamuna (essayed by Nasir Khan, the real-life brother of Dilip Kumar), goes on to become a police officer. And, lands up in the same village in Awadh, where his brother is a fugitive hiding from the law. Both are now on the opposite sides of the law, and the younger brother has to make a bitter choice between his duty and love for his elder brother.

In an interview to Filmfare, Dilip Kumar had shared that Salim and Javed had told him they were inspired by ‘Ganga Jamuna’ when they wrote the ‘Deewaar’ script.

“The positioning of the brothers on either side of the law bore a similarity. I was happy for Yash (Chopra) when ‘Deewaar’ became a success. It happens everywhere in the world whenever a film (Ganga Jamuna) attains immortality,” said Dilip Kumar diplomatically about the similarity in plots.

Dilip Kumar, however, did not refer to the fact that Filmfare had overlooked him that year for the best actor award and gave it to Raj Kapoor for ‘Jis Desh Mein Ganga behti hai’.

For the actor, who had developed an indigenous form of method acting, (much before the term was coined by a Russian acting coach), ‘Ganga Jamuna’ was considered by critics as one of his best roles. 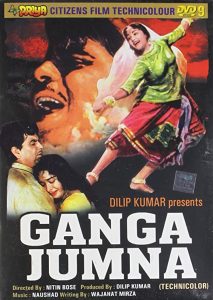 Critics raved about the thespian’s acting in ‘Ganga Jamuna’, in which he had blended rustic comedy, romance, tragedy and villainy “in a magnificent role of a lifetime”. “The Badshah of Acting enacts each scene with such ease and finesse that you are left astounded by the sheer brilliance of his genius since his body movements and dialogue delivery change in tune with the development of the character and story,” said The Hindu.

Indeed, Dilip Kumar, who went on to give to Indian cinema many memorable films after that (his role as the love-sick Salim with the beautiful Madhubala in ‘Mughal-e-Azam’ had already become a super success) was an inspiration to a league of actors who came after him – from Naseeruddin Shah to Nawazuddin Siddiqui.

But, he left his mark particularly on a tall, gangly actor Amitabh Bachchan, who was trying to make a dent in Hindi cinema dominated by romantic hero, Rajesh Khanna, at that time in the ’70s. Bachchan, who has been a big fan of the legendary actor has admitted that he learnt more about acting from ‘Ganga Jamuna’ than he did from any other film. Besides, his “angry young man” image that he cultivated from his Deewaar days, has been largely based on  the character of Ganga that Dilip Kumar essayed with a quiet and ferocious intensity.

Even Dharmendra was so mesmerised by Dilip Kumar, who had become the tragedy king of Hindi cinema in the 50s, that he decided to leave his village in Punjab and try his luck in Bombay to become an actor. Years later, he commented, “Dilip Kumar is that the brightest star whose shine I stole to light my desires”.

Once when Dilip Kumar was asked about Bachchan and Shah Rukh Khan copying his style, he told journalists that he believed Amitabh is an accomplished and complete actor, while Shah Rukh is extremely popular. “I’m not aware whether they have copied me. Generally speaking, it becomes easy for a serious actor to take a reference from a work he has liked and build on it. It should not be termed as copying or imitating. That’s what mimics do for a living”, he said. 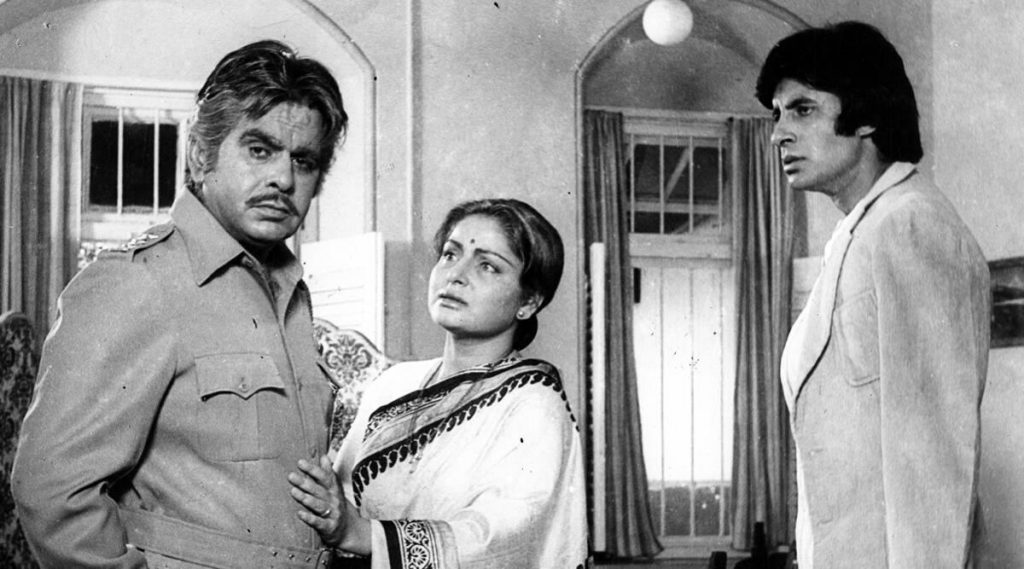 Bachchan however finally got a chance to work opposite his idol. It was his ‘Sholay’ director, Ramesh Sippy who made this possible. Sippy too like all directors nurtured a “dream and ambition” to work with the great Dilip Kumar.

The director had wanted to make a grand film, a kind of a ‘Father India’ with Dilip Kumar, about a man who sacrifices his son for his ideology. He told writers Salim-Javed that he had seen a film of Sivaji Ganesan (‘Thangapathakkam’), which had a plot on these lines. And. so they went ahead and bought the remake rights of the film.

“Almost nothing of the original remained finally, except the father killing his own son,” said Sippy in an interview to Bollwood Hungama. But when Amitabh Bachchan who was a big superstar in his own right by then, heard about the script, he wanted to act in it.

While Dilip Kumar, who was selectively doing character roles by then agreed to work with Ramesh Sippy since he could sense the “admiration and respect” of these directors when they came to him with their offers. Dilip Kumar not only did Sippy’s ‘Shakti’ (1982), he also gave the nod to Yash Chopra’s ‘Mashaal’ (1984) and Subhash Ghai’s ‘Saudagar’  in 1991. However, his roles in the latter two films were forgettable ones.

“I liked the scripts and their approach. I could see the triumph on their faces when I agreed,” he told reporters.

Sippy was thrilled since he had two brilliant actors from two different eras coming together. Sippy confessed that if Bachchan hadn’t come forward to do the role, they would not have dared to approach him for a son’s role in a Dilip Kumar film.

There were enough stories at that time of how Bachchan was highly nervous to face the legendary actor. He was after all a superstar at that time, and he did not want to end up being dwarfed by a legend like Dilip Kumar. But Bachchan pulled out all the stops and came out with a restrained but smouldering role of the resentful, wounded son.

There was a lot of anticipation around ‘Shakti’, which released to great reviews in 1982. It was an highly-acclaimed film and may not have been as successful as ‘Sholay’ or ‘Shaan’ for Sippy and Bachchan. But Bachchan must have been pleased as punch because he was able to match his acting chops with someone he had looked upto all his life. Both were nominated for best actor for their roles in ‘Shakti’ by Filmfare, but the magazine decided to do the right thing this time and honoured Dilip Kumar by giving him the award.

In ‘Shakti’, Dilip Kumar plays a police officer, DCP Ashwini Kumar, who is torn between his love for his son Vijay (Bachchan) and his overpowering sense of duty towards his job. While Bachchan is the troubled son, traumatised as a child after he is kidnapped by thugs seeking revenge against his father. At that time, Kumar refuses to give in to the demands of the kidnappers to save his son. But, Vijay manages to escape with the help of one of the sympathetic gang members but he never ever forgives his father.

In the end, Bachchan, who joins a smuggler’s gang when he grows up, dies at the hands of his policeman father. The ghost of ‘Ganga Jamuna’ continues to haunt Salim Javed.

The two giants of Bollywood cinema were however never cast together again. And when Dilip Kumar was asked whether there were competitive vibes between him and Amitabh during the shooting of ‘Shakti’, he said in an interview, “Amitabh was and still is a disciplined actor and a well-mannered gentleman. We shared very good vibes and contrary to gossip in the media both of us knew the profile of our characters and our scenes together before the film mounted the set.”

He also added that he had often mentioned to Ramesh Sippy how impressed he had been by the way Amitabh held the scenes, where he had minimum or no dialogue and the camera was focussed on him. “I remember telling Ramesh here is an actor who has understood the secret of acting for the camera. Most actors act without knowing that the camera is doing or not doing or where its eye is trained.”

Dilip Kumar, interestingly, was inspired by the late actor Ashok Kumar. When he started off as an actor in the Bombay Talkies studio, he used to quietly sit on the set watching Ashok Kumar perform ever so effortlessly and naturally. It was then the story goes that Ashok Kumar told him something that stuck with him: “Acting is all about not acting. I know it’s a confounding statement and will perplex and haunt you. But you will understand when you face the camera yourself.”

Today, after Dilip Kumar’s death, Bachchan paid a tribute to the actor who had shaped his acting career by posting online: “An institution has gone…Whenever the history of Indian Cinema will be written, it shall always be ‘before Dilip Kumar, and after Dilip Kumar’. An epic era has drawn curtains with his passing”.