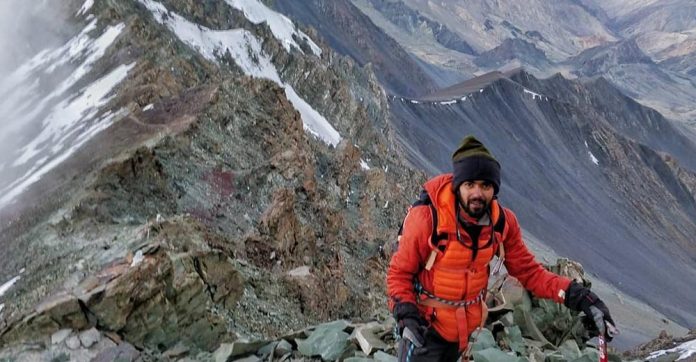 At 25, Harshvardhan Joshi has moved mountains. For one thing, the IT engineer conquered Mt Everest in his very first attempt. For another, he achieved it in a sustainable, eco-friendly fashion, proving that man doesn’t have to trample all over Nature for his personal victories.

“A minimalist at heart, I want to show the world that we can learn to live with the bare minimum,” Joshi said on his website. “I want to promote sustainable living and encourage the usage of clean energy alternatives in everyday life.” In line with this philosophy, he used solar power to source 100% of his energy consumption across the entire expedition.

My solar panels are craving for the Himalayan sun pic.twitter.com/87juNEkf2y

Further, Joshi could have a strong message for India’s vaccine-hesitant population. He suffered from a bout of COVID just weeks ahead of his expedition; yet, thanks to the jab, his infection was mild and mostly asymptomatic, letting him go ahead with the highly arduous journey.

Titled SangHarsh, Joshi’s conquest of the Everest is meticulously documented on his website as well as on his Instagram account. He also used the digital space to crowdfund his trip. Soliciting funds, he said: “$55,000 is a huge amount. Your contribution, however little, can make my day, literally. $100 would cover my meals for a day. $500 would amount to my daily expenses at 20,000+ feet above sea level.”

Thus, the young man “from a middle-class family” in Vasai, Maharashtra, trained for five years and achieved the Everest feat in 65 days. “A learning and humbling experience,” he called it.

Initially, when Joshi came across team members at the base camp feeling unwell, and having mild coughs, it didn’t raise any alarm. Later, though, the team realised that the COVID virus had reached the base camp.

Recounting the difficulties caused by the contagion at the camp, Joshi told Indian Express in an interview: “You would imagine training and being responsible for the expedition would prepare you for everything, but that’s not quite so what happened up there.”

When he first tested positive, his “heart sank”. While the medical advice was for him to go home, Joshi stuck to his resolve. A tremendous amount of training had gone in. There were financial commitments. The thought of scouting for sponsorship all over again was daunting. So he decided to stay on.

Joshi was fully vaccinated ahead of his adventure, and that probably did the trick. “Vaccines definitely work. It was probably why I could manage to do the impossible…recovering from COVID in an environment that is perilous to the disease,” he told Indian Express.

Finally, he tested negative and began his climb. On May 23, Joshi reached the summit.

“When I reached the top, and waved the flag, I just couldn’t feel much, I was very numb to be honest. I was very happy but I was thinking this is just 50% of the journey,” he said. The climb down, apparently, is far more arduous than the one up. Finally, on May 29, he reached downhill, from where he took a helicopter to leave the base camp.