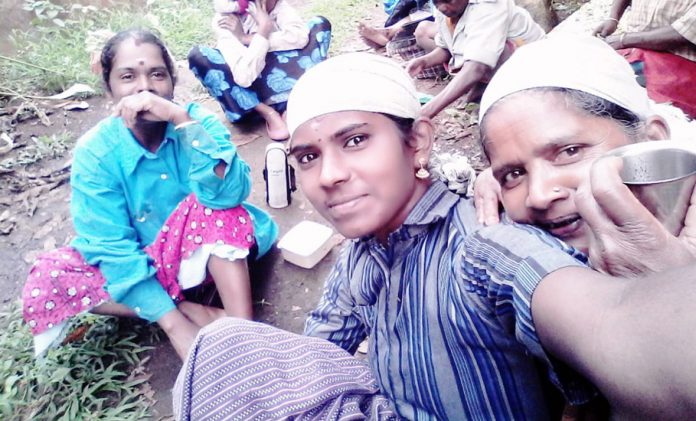 Unarguably, it is a big leap for a plantation labourer to clear an exam and qualify to become a government high school teacher.

But driven by a passion to prove herself, 28-year-old S Selvamari doggedly pursued her dreams with single-minded determination to achieve what she has done today. It has been an arduous journey but this intrepid girl doesn’t want to stop dreaming and is eyeing the Civil Services Examination as her next goal.

What is inspiring about this Dalit girl who hails from a village bordering Tamil Nadu and Kerala, is that she did not allow poverty, caste and linguistic discrimination to deter her from her dreams. The eldest of three daughters, she came from a poor family. Her father had deserted them and the onus of bringing up the children had fallen on her mother Selvam and grandmother Pechiammal.

Life was hard for the family. At this point, relatives had even suggested that Selvamari quit her studies and marry. But she politely disobeyed. Once, her mother had asked her to work to support her education expenses. It was said in a light vein. But Selvamari felt “antha rosham” (blind anger) and took up the challenge to show her mother that she could do it.

“I started to accompany my mother and grandmother to work on the cardamom plantations as a labourer,” Selvamari says in a conversation with The Federal.

Working as a plantation labourer was back-breaking work. The women harvest the beans with their bodies bent like a question mark. “The entire day we have to work in a stooped posture for harvesting cardamom beans and this causes a severe backache,” recalls Selvamari.

At that time, a woman labourer would make ₹150 (not exactly a King’s ransom) as daily wage for working from 7.30 am to 6 pm at the plantations.

The family lived in a house provided by the estate when she was in primary school. Later, the family managed to slowly construct a small house. Initially, their house had tarpaulin and plastic, which served as windows but gradually the house got an electricity connection in 2011. Largely, due to Selvamari’s efforts.

Selvamari became the family provider with her daily labourer’s wages even as she continued to pursue her studies. She studied in a Tamil medium government school in Theni district and was the teacher’s favourite. And, she was one of the top three students in her class.

Once she completed her plus-two course, she joined BSc Mathematics in the Government College for Women in Thiruvananthapuram. It was a lonely and miserable life, as she became the butt of jokes as Malayalee students used to tease her calling her “Tamizhathi” (referring to her Tamil identity).

There was widespread linguistic discrimination on the college campus and she felt isolated. Not being fluent in English, having studied all her life in Tamil medium schools, did not help either.

A Tamilian friend dropped out of college and discontinued her studies since she was unable to cope with the strained circumstances in the college, recalls Selvamari. She also contemplated dropping out but her mother warned her not to do so since it would set the tongues wagging in their village.

Tamil students in the hostel however made life bearable for her and she stayed on at the college. Also, even if she had the opportunity to return home she stayed back because she had better facilities to study in the hostel.

After completing her post-graduation degree, the enterprising Selvamari also did her MPhil, BEd and MEd – all supported by her labourer’s wages and a fellowship. There were a lot of hardships along the way but she prefers not to talk about it.

Selvamari cleared the Kerala Public Service Commission (PSC) exam twice. In 2013, she got selected for a job in the civil police department, but she could not join for various reasons and opted to continue her studies. In 2017, she appeared again, cleared the exam and got the order appointing her as a high school teacher in September last year.

She could not join the school because of the pandemic. But, last month, she was asked to take up her position as a high school teacher of the Government Tribal High School in Vanchivayal, Idukki district, which she promptly did. The school is roughly 16 km from her village Chottupara in Kumily panchayat.

It is not surprising that Selvamari is also at the fag end of a PhD course and is all set to submit her PhD thesis in the next few months. Meanwhile, she is not about to sit back on her laurels but has been quietly preparing for the Civil Services exam on her own (she cannot afford to pay for coaching classes).

Selvamari narrates that during her college days she had happened to attend a lecture by young IAS officer Haritha V Kumar ( the current district collector of Thrissur) and that lecture inspired her to try for civil service.

Her two younger sisters are married. When she looks back on the taunts and insults she had endured in her college days in Thiruvananthapuram, Selvamari is able to now laugh at all that pain and angst she used to feel. But she credits her guide Sameer Babu for advising her at that crucial time to set aside the hurt and anger and focus on her studies.

Today, this “Tamizhathi” is the winner for having followed his advice, and she’s unstoppable as she has set her eyes next on the Civil Services exam. There’s nothing that will stop her now.