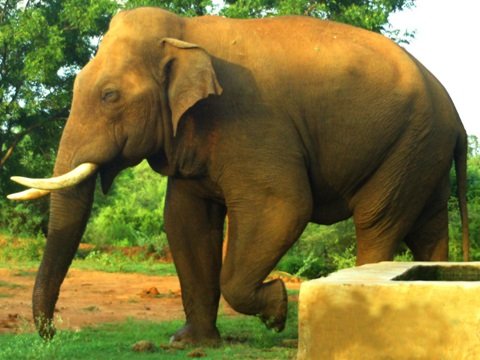 Bahubali of the Western Ghats is a habitual crop raider, entering farmlands at night and moving back into the forest when day breaks.

It’s a tale of two elephants for people residing in the forest ranges of Tamil Nadu’s Coimbatore and Nilgiris districts. One is a story of how elusive an elephant can get when it comes to radio collaring. The other is about why a pachyderm is kept inside a kraal even when he’s deemed to be harmless.

Bahubali, the hero of the first tale, got his name because of his gigantic body. He had been first spotted in Mettupalayam, in the foothills of the Western Ghats, a year ago. It is claimed that he is a habitual crop raider, entering farmlands at night and moving back into the forest when day breaks.

However, according to some media reports quoting forest officials, the elephant had begun to damage pipelines and compound walls. In order to study the routine of the elephant, codenamed ‘MP20T1’, the district forest department decided to radio-collar him.

The process began on June 26. A team was formed and three kumki (trained) elephants were deployed to help tranquilise Bahubali and capture him. District forest officer D Venkatesh reportedly told mediapersons that the 40-year-old jumbo was “very active and clever”, so he remained elusive even after a week of trying. The smell of the kumkis and the constant human vigilance probably alerted him.

Of late, the darting of animals has become difficult and time-taking, it has been reported. Is the forest department witnessing any change in the behavioural pattern of elephants?

“No, we haven’t witnessed anything like that,” Venkatesh told The Federal.

The behaviour differs from animal to animal, he said. Before tranquilising the animal one needs to study its behaviour, he added. “Particularly in this case, we need to monitor the animal for some more time and hence we have pushed Operation Bahubali to another 10 days.”

“Tranquilising an elephant is not difficult but it is a task all the same. The task must be carried out with utmost care,” he explained.

K Kalidasan, wildlife activist and founder of Osai, an organisation working for the conservation of wildlife, said tranquilising an elephant is easier said than done.

“Once we dart an elephant, it will not immediately faint. It usually runs for some kilometres and then goes into sedation. If it falls on its stomach, it may die. Similarly, if its trunk touches the ground when it falls, it may collapse. If the tranquilised elephant is male and its penis comes out when it is falling, it could cause a problem,” he pointed out. Hence, tranquilising an elephant needs care, he added.

For one thing, the pachyderm should be tranquilised only on plain terrain, so Bahubali cannot be tackled once he enters the ghats. Plus, he is just a crop raider and not a wounded or otherwise problematic animal, so there is no need to capture him immediately, said Kalidasan. “We can take some more time,” he added.

“However, expenditure wise it is a concern,” he further noted. “We have to transport the kumkis and feed them. The role of kumkis becomes important only after tranquilising the animal.”

Now, the second tale. Rivaldo, a wild elephant, has been living in the Mudumalai Tiger Reserve (MTR) forests for a while now. Over the years, people have been feeding the pachyderm and he has become habituated to humans. So much so that he would amble freely around the villages close to MTR.

Rivaldo may not have hurt any humans, but he did damage compound walls and petty shops in his search for food.

Recently, he had some health problems and the forest officials decided to take him into a kraal (a wooden shelter for an elephant to restrict its movements) for treatment. The officials had said that after treatment he would be taken to an elephant camp, where he would be in permanent captivity. The villagers agreed this was the best way forward.

But this drew protests from wildlife activists and politicians such as BJP MP Maneka Gandhi and Tamil Nadu BJP MLA Vanathi Srinivasan. They urged the state government to release the pachyderm. If Rivaldo had no history of attacking humans, why should he be kept in captivity even after treatment, they asked.

“In general, a male tusker, at the age of 12 or 13, comes out of his herd and starts looking for a female elephant to set up his own family. But if the tusker is captured and turned into a kumki, his life is finished. He can never return to the forest and survive,” he said.

Talking to The Federal, MTR field director KK Kaushal said an eight-member committee has been constituted to decide on the next course of action for Rivaldo. “The pseudo animal activists look only from the animal point of view. But we should also give an ear to the public. Only then animals can be protected,” he said.

The committee will look into issues like the health of Rivaldo, and examine his potential release into the wild — the timing and necessary precautions.