The USA and Namibia will host a World Cup for the first time, while Australia, Bangladesh, England, Ireland, India, New Zealand, Pakistan, Scotland, South Africa, Sri Lanka, West Indies and Zimbabwe have previously staged major events and will do so again.

The schedule indicates the sport’s governing body has distributed the tournaments with an eye to conquering new markets and improving its bottom-line.

The hosts were selected via a competitive bidding process overseen by a board sub-committee chaired by Martin Snedden along with Sourav Ganguly and Ricky Skerritt. The ICC board accepted the recommendations of the committee, which reviewed each bid along with the ICC management.

A similar process to identify the hosts for ICC women’s and U19s events for the next cycle will be undertaken early next year.

The Federal takes a close look at the men’s schedule to understand its significance. 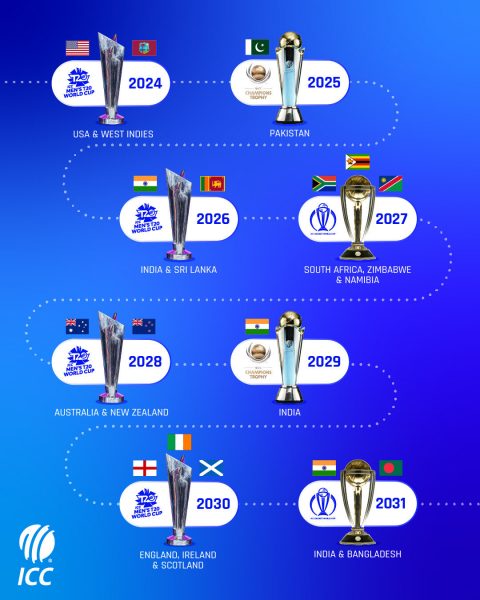 The USA will co-host the T20 World Cup in 2024 along with the West Indies. This will be the first time ever that a major ICC event comes to the US.

The ICC has long seen the US as a potentially lucrative market. “The ICC has identified the USA as a strategic market for growth that will benefit cricket around the world,” Paraag Marathe, the chair of the board of USA Cricket, said on Tuesday.

“A major event in 2024 will be the critical catalyst to improve facilities, develop a professional league, grow the fanbase and inspire public and corporate support.”

The West Indies will host two-thirds of the matches in the 2024 tournament, with the US staging the rest.

The 50-over World Cup will return to Africa after 24 years when South Africa, Zimbabwe and Namibia host it in 2027. The 2003 edition had Kenya as a co-host. Namibia, who impressed many with their skill at the recent T20 World Cup, will get to showcase their talent in the bigger format in 2027.

Pakistan was reduced to the status of a pariah in world cricket after the 2009 terrorist attack on the Sri Lankan team in Lahore. The country last staged a major event in 1996, when it hosted the World Cup with India and Sri Lanka. Pakistan has now been awarded the 2025 Champions Trophy – a decision that will be welcomed by cricket lovers all over the world.

India, which remains cricket’s most lucrative market, received the lion’s share of the big-ticket events. It will play host – either by itself or in partnership with one of its neighbours – the 2023 World Cup, the 2026 T20 World Cup, the 2029 Champions Trophy, and the 2031 World Cup over the next eight years.

Cricket’s traditional powerhouses will host just one big tournament in this cycle. Australia will co-host the 2028 T20 World Cup along with New Zealand. England, Ireland and Scotland were named as co-hosts of the 2030 edition. The 2030 event will be the first time since 1999 that Ireland and Scotland have hosted games in a major cricket event.