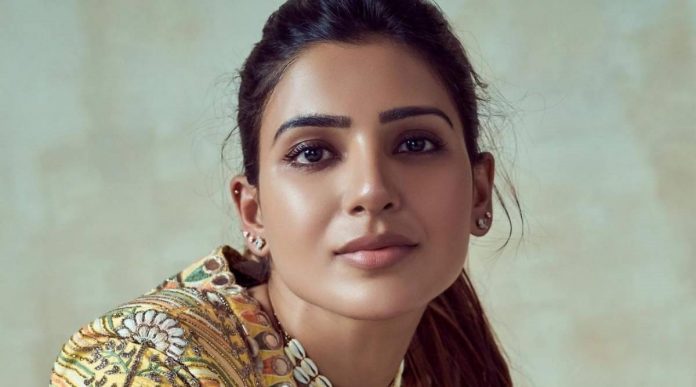 Samantha, who is recovering from a painful divorce, has been battling with ugly rumours about what triggered the breakdown of her marriage with Telugu actor Naga Chaitanya

‘Family Man-2’ actress Samantha Ruth Prabhu, who is currently going through a painful divorce and busy fending off ‘malignant content’ on TV channels about her, has shared an inspiring post on her Instgram page about the importance of teaching ‘daughters’ to become financially independent and to stop obsessing about who will marry them.

In the post, Samantha urges parents to make their daughters “so capable” that they don’t have to worry who will marry them. Instead of saving money for their daughter’s wedding day, spend it on her education, she wrote. “And, most importantly, instead of preparing her for marriage, prepare her for herself. Teach her self-love, confidence, and that she can throat punch someone if she needs to,” said the stirring post.

This is not an original statement by Samantha since it was earlier posted by Indian Women’s Hockey team captain Rani Rampal.

Samantha has been in the news for her divorce with Telugu star Naga Chaitanya. Trying to dig into the reasons for her divorce, many TV channels started airing speculative stories alleging that her affairs and refusal to have a child led to her divorce. The actress told IANS that she was filing a defamation suit against a few TV channels and YouTube channels for streaming ‘malignant content” against her. 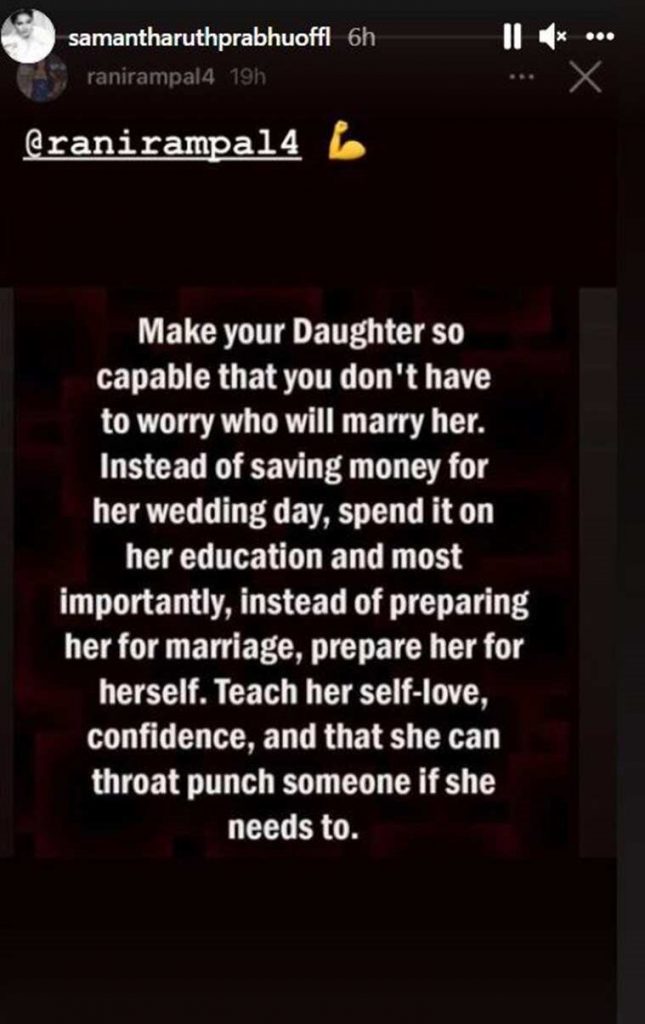 In an earlier tweet, she had pointed out that the attack on her personally has been “relentless”. A divorce in itself is an extremely painful process and people were not allowing her the time to heal, she said, thanking those who had shown her deep empathy, concern and for defending her against false rumours.

“They say I had affairs, never wanted children, that I am an opportunist and now that I have had abortions…This attack on me personally, has been relentless. But I promise you this, I will never allow this or anything else they say, break me.”

On the work front, Samantha who was last seen in Raj and DK’s ‘The Family Man Season 2’, where she had played the role of a terrorist, is now waiting for the release of big budget Telugu movie ‘Shaakuntalam’, where she plays the title role. She will also be seen in the upcoming Tamil romantic comedy ‘Kaathu Vaakula Rendu Kadhal’, which also stars Nayanthara and Vijay Sethupathi. This film may head for an OTT release, said media reports.

Samantha is thrilled about her upcoming horror film with director Ashwin Saravanan as well. Acknowledging that she is working on the project, the actress recently tweeted: “It’s going to be much more than just a horror film.”

Samantha made her debut as television show host with a celebrity chat show called ‘Sam Jam’ and also hosted a few episodes of Telugu ‘Big Boss’ when her father-in-law and actor Nagarjuna was unavailable due to his shooting schedules.