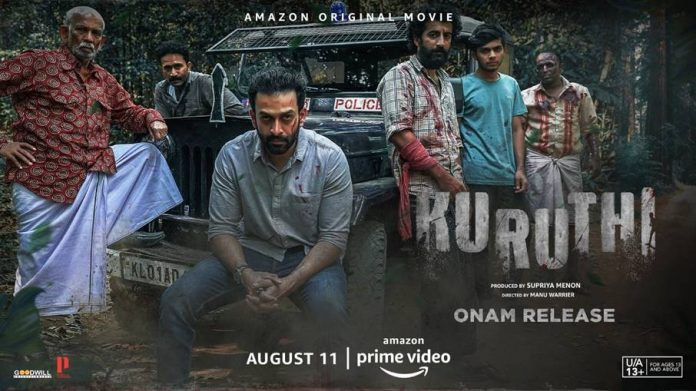 After the cold reception for his OTT debut thriller ‘Cold Case’, Malayalam actor Prithviraj is now banking on his next film ‘Kuruthi’, his home production, a political thriller, which is all set to release on Amazon Prime Video this Onam.

Prithviraj tweeted about ‘Kuruthi’ opting for an OTT release on July 28 (after wishing his good friend Dulquer Salman on his birthday): “This Onam, keep your friends close and frenemies closer! Watch #KuruthiOnPrime, Aug 11″.

Prithviraj also tweeted the film poster, which showcased the entire ‘Kuruthi’ cast – which included Roshan Mathew, Muraly Gopy, Shine Tom Chacko and Mamukkoya. It is meant to be an edge-of-the seat thriller that depicts a tale of how human relations struggle to survive trials of hatred and prejudice.

‘Kuruthi’, which means ritual slaughter, marks director Manu Warrier’s debut in Malayalam cinema. He had earlier directed a Hindi romantic film ‘Coffee Bloom’ and TV series ‘Yudh’ (both in 2014). Warrier described the film as “a socio-political thriller that has got a bit of drama, action and thrilling elements” and is a “very rooted” subject set in Kerala.

‘Kuruthi’ was completed in January before the second wave of the pandemic and was supposed to release worldwide on May 13 this year. But, as theatres are yet to open in Kerala, several filmmakers have opted for the OTT route.

Meanwhile, Prithviraj is presently busy shooting his next directorial venture ‘Bro Daddy’ in Hyderabad. He is also playing a key role in the film, which stars Mohanlal in the lead role, said an Indian Express report.