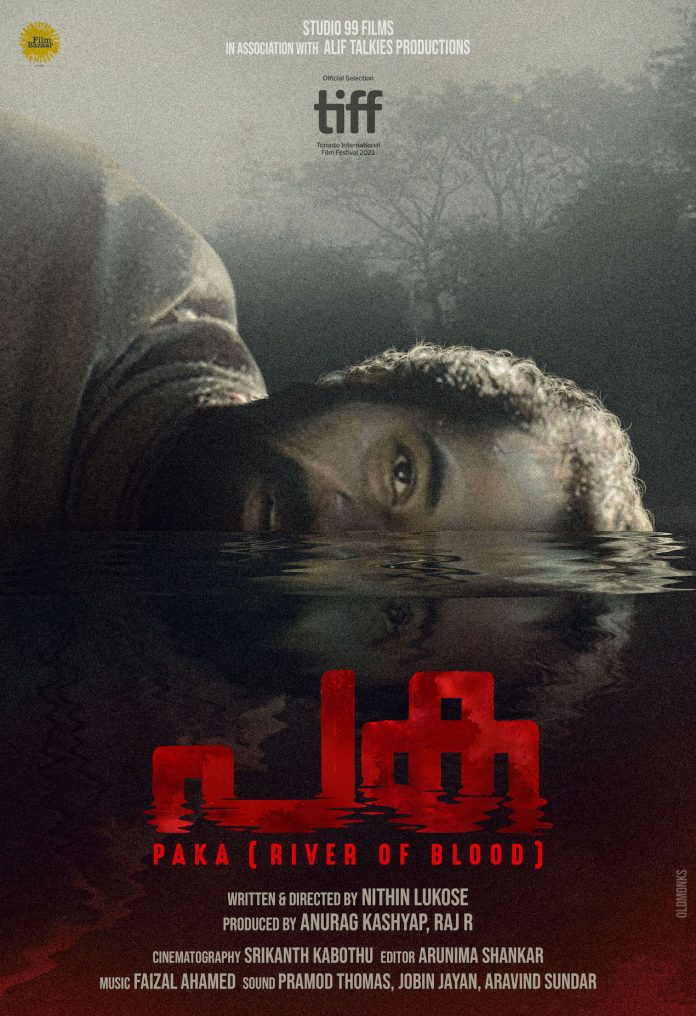 Paka (River of Blood) will premiere at the upcoming Toronto International Film Festival (TIFF) in September, which will be held in a hybrid manner, with both in-person and digital screenings

Malayalam film ‘Paka’ set in Wayanad in Kerala is a tale of a river that swells with the blood of two feuding families and a young couple that try to overcome this hatred with their love.

The directorial debut of Nithin Lukose, an FTII graduate and sound designer of ‘Thithi’ and ‘Sandeep Aur Pinky Faraar’, ‘Paka’ (River of Blood) will premiere at the upcoming Toronto International Film Festival (TIFF) in September. The film will be screened in the festival’s Discovery section, which usually showcases the work of debut filmmakers. Ritwik Pareek’s ‘Dug Dug’ has also been selected to be shown in this section as well.

The director Nithin Lukose is “delighted” about having his directorial debut premiere at a globally renowned festival like the Toronto International Film Festival. In a press statement, he said, “I was fascinated by the stories and myths my grandmother told me when I was young. ‘Paka’ is a manifestation of that fascination.” His film ostensibly is rooted in the cultural milieu of the village he grew up in as a child.

The film centres around a serpentine river in north Kerala which is a mute witness to the long and bloody cycle of vengeance between two feuding families. Johnny and Anna, a young couple, wish to end the hatred between their families with their love and begin a life together.

However, the return of Johnny’s uncle Kocheppu, after imprisonment and his subsequent disappearance becomes a hurdle in their path of love and forces them on the path of blood, murder, and revenge.

The director, Nithin Lukose who was born in Wayanad, remembers growing up in his village listening to stories told by his grandmother. They were stories of migration, survival, the fights for land and wealth which resulted in the family feud, while a large number of the population migrated from the south to the north of Kerala in the 1950s, he recalled.

In ‘Paka’, a family feud resurges from the past when someone comes back from jail after life imprisonment. Lukose always wanted to make his first film in Wayanad where he grew up. His film draws from his memories of a dangerous river near his place, notorious for its deep trenches. Floods, accidents and murders pushed people and dead-bodies into the river which only one man in the village ostensibly could retrieve.

According to Lukose that was a middle-aged man named Jose, an outstanding swimmer who knew the river in and out, and was the one who took out the dead bodies from the river. “I grew up seeing this and I shaped the story of the film from my memories. I connected such unique aspects of my hometown to the stories which my grandmother told about family feuds and started writing the story for my first film, and that’s how ‘Paka (River of Blood)’ shaped into a feature film,” he said.

A graduate of the Film and Television Institute of India, Lukose has been a part of many internationally acclaimed films. A first-time winner of the Resul Pookutty – IIFA Foundation scholarship award in 2010, he was the sound designer for ‘Thithi’ (2015), which won him the Golden Leopard award in Locarno International Film Festival. He has part of the recently released Arjun Kapoor and Paraneeti Chopra film, ‘Sandeep Aur Pinky Faraar’ as the sound designer.

Meanwhile, Anurag Kashyap who boarded the project as a producer during its post-production stage said, “Malayalam cinema is at the moment leading India on the world stage and I am so grateful to be associated with it in a small way. ‘Paka’ is yet another powerful debut from a rooted new voice.” Raj Rachkonda, a Telugu director, has also co-produced the film.Mat swells with the blood of two feuding families and a young couple that tries to overcome this hatred and vengeance with their love.