Renowned Tamil film director Karthik Subbaraj wanted the audience to feel ‘empathy’ after seeing his latest offering, gangster flick Jagame Thandhiram (the world is tricky), which landed on Netflix with great expectations at 12.30 pm on June 18. Ostensibly, he wants you to feel empathy towards the issues raised in the film. But after watching this 2-hour-and-38-minute film on an agile Madurai gangster, who is recruited by a British gangster to fight his Tamil rival in London, all you feel is bewilderment.

The movie, made with all the right intentions, really lacks a solid plot. It takes off as a gangster film, as rival gang members are bumped off through car bombs or mercilessly gunned down. There’s also a scene where a man’s fingers are smashed with a hammer by mobsters that later we learn are revolutionaries and not the bad guys. But the film is not limited to bloody gang war shootouts with no sign of the British police. It strays into other territories as well such as immigrant issues and Sri Lankan refugees in England without delving into these subjects with any depth.

Clever, infallible superman Suruli (played with swagger and verve by Dhanush) has been roped in by Peter (James Cosmo) to counter his foe in the crime world in London, a Tamil gangster, Sivadoss (played by Joseph “Joju” George who simply fails to fit into the role of a godfather figure helping Sri Lankan refugees to get legal status in England, despite wearing large robes). Maybe, he would have preferred to be back on the sets of his acclaimed film, Nayattu, streaming on the same OTT platform. 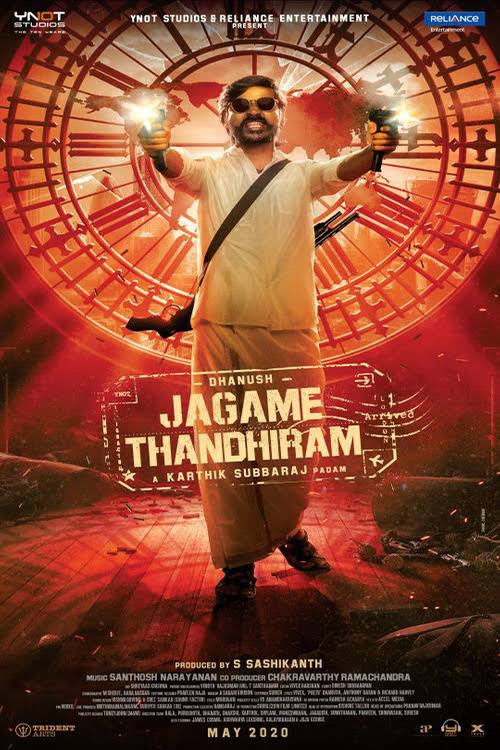 Jagame Thandhiram’s first half is racy but the film starts to drag half-way because there is too much going on. The battle between the two hoodlum groups turns out to be an ideological one and so Cosmo is the ‘white supremacist’ who hates brown people and Joji George is the saviour of refugees who arrive in Britain. Suddenly, you have dialogues on the helplessness of being stateless and the reason behind man-made borders and, you feel these complex and serious issues are just incidentally lodged into the script.

At one point, a character who has come to England and settled down talks disparagingly about not having an official document (which is just a paper, he says) to prove he is legally in England. To which Suruli replies that people should just belong to the place where they find work and home. Well, the British immigration, and for that matter the Indian government which has brought out a controversial Citizenship Amendment Act, may not agree with this simplistic kind of reasoning. In Jagame Thandhiram, Britain is trying to introduce a new law to throw out immigrants and that is also used as a kind of peg to move the lacklustre story forward.

However, the story of a Sri Lankan brother and sister, and a small child fleeing the ravages of civil war in their homeland, to make their torturous journey via Rameshwaram, Ukraine, Poland, Germany, France to reach England, is stirring. The background score during this flashback sequence, Theipirai, sung by Meenakshi Elayaraja and Santhosh Narayanan is definitely haunting. The music in the film has already received rave reviews, the peppy Rekita Rekita is rousing and fun and Dhanush pours all his energy to execute his thapankoothu moves. But the Bujji number, which had some great choreography and colour, is missing, and so is Dhanush’s romantic ballad Nethu. Maybe, Subbaraj dropped it because the film is already too long.

Dhanush spiritedly and gamely carries the film on his shoulders. Subbaraj’s classic touches are all there. The character, who plays Suruli’s friend, Vicky (essayed by Sharath), provides light relief. The film looks slick, technically brilliant, the cinematography is great and at one point with some top shots of snowy landscapes and other lengthy takes, you wish you were watching this film in the theatre.

There’s one sequence that has Cosmos and Dhanush doing a small, celebratory jig on the street with a music score that seems like a combination of a Scottish bagpipe and an Indian instrument. This has a nice feel. It seems Cosmos had wanted to dance since he was acting in an Indian film and maybe, Subbaraj humoured him.

There’s also Subbaraj’s tribute to old Tamil songs, which makes you misty-eyed. Suruli’s romantic partner, played by Aishwarya Lekshmi, who goes by the name of Atilla, is introduced in the film singing the ageless, romantic song from K Balachander’s Velli Vizha – the sultry Kathoduthaan Naan Paaduven. Jagame Thandhiram, which is streaming on Netflix, is strictly for Dhanush and Subbaraj fans, which are incidentally, most of Tamil Nadu.

Subbaraj’s 2014 Jigarthanda, a far more fun and well-knitted gangster film by Subbaraj, is available on Disney+Hotstar. In the mood for gangsta, there’s the brilliant Vetrimaaran’s Vada Chennai, Lijo Jose Pellissery’s captivating Angamaly Diaries, on OTT too.

Vidya Balan’s Sherni also released on Amazon Prime Video this weekend. Balan plays an upright forest officer here battling with a patriarchal society and the lackadaisical attitude within her own department. This film has some effective scenes, which highlights the weariness of government officers, who just give up and stop fighting the moribund system. But these are costly mistakes as the man-animal conflict has increasingly become a serious issue in many parts of India and Sherni is meant to nudge you out of a comfort zone. It is all too real and true. This is what happens as government officers turn ineffectual at the hands of politicians and political parties.

Newton-fame director Amit Masurkar, who has directed the movie, shines a light at the very core of the problem but he makes it so real that it becomes like a documentary in parts.

Balan’s highly restrained performance lifts the film a few notches higher. But, Sherni does not focus on her character and so we fail to understand her motivation to fight this losing battle to keep the balance and respect between nature and humans and between men and women. It is a slow film but worth a watch.

For all animation fans, Luca, a Disney-Pixar movie, landed on Disney+Hotstar. The coming-of-age story is directed by Academy Award nominee Enrico Casarosa and is set in the fictional city of Portorosso. Luca Paguro, a sea monster/shapeshifter, and his best friend Alberto Scorfano explore the life-changing experience in the town. Fatherhood, starring Kevin Hart, which opted for a direct release on the OTT platform landed on Netflix this weekend. It deals with a story of a single father, bringing up his daughter, after the death of his wife.

What is OTT without a thriller? Official Secrets is a 2019 thriller movie, directed by Gavin Hood. The story has been adapted from the book, The Spy Who Tried to Stop a War, authored by Marcia and Thomas Mitchell. The story follows the life of Katharine Gun, a British intelligence specialist, played by Keira Knightley. The film is streaming on Book My Show.