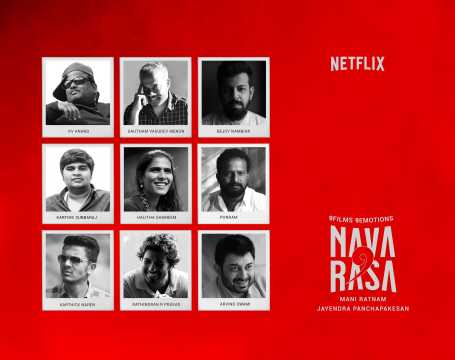 The star-studded Netflix anthology 'Navarasa' starts streaming from Friday at 12.30 pm. Be warned that the anthology of nine short films is four and a half hours long

An ‘unadulterated sci-fi’, a courageous woman who goes in search of her military husband who goes missing (ring a bell, ‘Roja’?), a woman living under the ominous shadow of fear in a horror flick; a laugh riot helmed by none other than the badshah of comedy, Priyadarshan, with ‘Mandela’ actor, Yogi Babu (current reigning symbol of tongue-in-cheek kind of humour in Tamil cinema).

And, the emotion of disgust is explored with a young widow played by the feisty Aditi Balan and the cherry-on-the top is an ode to intense love essayed by charming Tamil superstar Suriya orchestrated by his old-time hit director Gautam Menon.

These are some of the stories depicting the nine rasas or emotions in ‘Navarasa’, the anthology produced by Mani Ratnam and Jayendra Pachapakesan, which will release on Netflix on Friday at 12.30 pm. ‘Navarasa’ seems to be like a giant endeavour with a multiple Manmohan Desai kind of star-cast featuring the likes of Suriya, Vijay Sethupathi, Siddarth, Bobby Simha, Revathi, Anjali, Parvathy Thiruvothu etc. 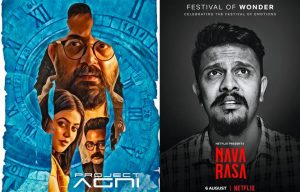 What’s interesting about this short film feast  examining a gamut of human emotions is that one is a sci-fi. Directed by 27-year-old Tamil director Karthick Naren, the short film ‘Project Agni’ is a “dream film made from an unadulterated sci-fi concept”.

According to the director, after Mani Ratnam had assembled the project, his first choice was Arvind Swami and Prasanna. He had worked with the two of them and knew “Arvind Swami is the kind of person who really improvises on the set”. Giving a glimpse into the subject of his short, the director told the media that the conversation Aravind Swami and Prasanna have in this film is a conversation that had lived inside his head for a very long time.

“Prasanna Sir’s character is like that other voice you have in your head. The questions that Prasanna Sir asks and the answers that Aravind Swami gives is an extension of the conflicts a person has in his mind,” he added.

Incidentally, Arvind Swami who is Mani Ratnam’s protégé from ‘Dhalapathy’ and ‘Roja’ days, was given the director’s baton by Ratnam. It was Ratnam who had first discovered Swami, who was a businessman and brought him into the movies. So, it seems befitting that his christening in film direction too comes from the master director himself.

Arvind Swami takes up the subject of anger to make his directorial debut. The film, ‘Roudhram’, has actor Riythvika (of Pa Ranjith’s ‘Madras’ fame and Big Boss winner 2) playing a stern cop ‘Anbukarasi’ holding onto her dignity above all else. “Anger is a very powerful emotion,” said Riythvika, who had found the role challenging to play. The film has been shot by Santosh Sivan, another old favourite of Mani Ratnam.

Malayalam star Parvathy Thiruvothu, who was recently seen in Malayalam anthology, ‘Aanum Pennum’, will be seen here as a middle-aged woman named Wahida in a horror short, Inmai. Married to a wealthy, terminally ill man, Wahida is circled by the feeling of fear. 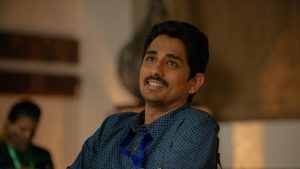 Actor Sidharth also plays a role in the film. “People’s curiosity will be elevated when they hear the Word ‘Inmai’. This project ‘Navarasa’ is a step to help the film fraternity and the people involved by raising funds, who have been severely affected by COVID,” said Siddharth. The people who are working on this project have worked for free and the proceeds of this are going towards helping people in the film industry badly affected by COVID.

Anjali, who had taken a sabbatical from acting, now shares the screen with Atharvaa in another short, ‘Thunintha Pin’. She plays the wife of a military man who has gone missing, and she sets out to find him. “Behind every strong woman is a trove of deep emotion. The emotion of courage is similarly layered,” she said in an interaction with the media.

The shooting of ‘Thunintha Pin’ was held at a rainforest location, Achan Kovil, near Tenkasi and was shot in five days. Another short slated to be promising will be Priyadarshan’s ‘Summer of 92’. Starring Yogi Babu in the lead, filmmaker Priyadarshan taps into the theme of laughter. Director Vasanth’s segment titled ‘Payasam’ features Aditi Balan, Delhi Ganesh and Rohini in important roles and most probably taps into the emotion of disgust.

Tamil cinema’s favourite Bollywood director Bejoy Nambiar will direct the short titled ‘Ethiri’, which will star actor Vijay Sethupathi in the lead. Actors Prakash Raj, Ashok Selvan and Revathi are also part of this segment. The plot of Ethiri is likely to be based on the theme of compassion.

For strumming up love, there’s ‘Guitar Kambi Mele Nindru’, which will have a madly in love Suriya. All this sounds like an interesting package put together by Mani Ratnam, who is a master with labours of love. But here’s a warning, the anthology is four and half hours long. So, you may want to keep aside an entire afternoon or watch it in segments. Wish Netflix had released it in two volumes.

A Big Little Murder and a new zombie feast 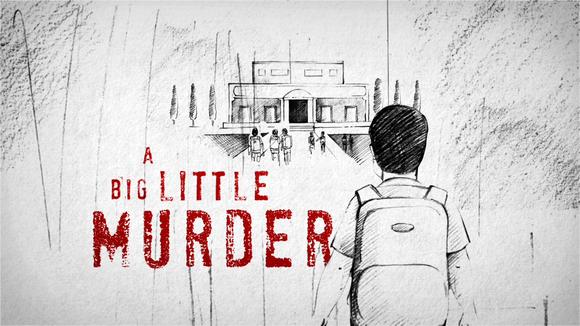 Based on true-event, the documentary sheds light on India’s first school murder of a seven-year-old. The body of the child was discovered in the washroom in 2017 that shocked the entire nation. The police initially arrested a bus conductor making it a sexual assault case. However, later a class 11th boy was arrested by CBI for the murder. This well-made documentary features interviews with the unfortunate boy’s parents, school authorities, police, journalists who had covered the crime etc., and traces the events before and after the gruesome murder.

Directed by Rensil D’silva, Dial 100, lands on Zee5. The film shows how one phone call can turn someone’s life upside down. While Manoj Bajpayee will be seen in a race against time to save his family, Neena Gupta will be seen donning a dark role, willing to go to any extent to avenge her son’s death. The movie also stars Sakshi Tanwar in the pivotal role. 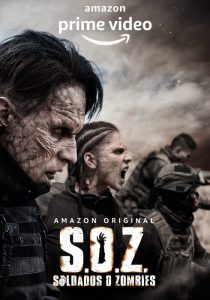 On Amazon Prime, it’s S.O.Z Soldiers & Zombies which deals with the arrival of a new breed of zombies. (how bad can they get?) To avoid extradition, the charismatic and unpredictable drug lord, Alonso Marroquín, escapes prison in Mexico to hide in the middle of the desert. While on the other side of the border, a United States Army experiment with pigs in a military base, goes wrong and the Mexican police unit going after Marroquín gets infected, transforming them into a new breed of zombies with special abilities. The army and this new species converge in Marroquín’s hideout, where the battle for survival begins. Here’s another blood-curdling zombie feast.