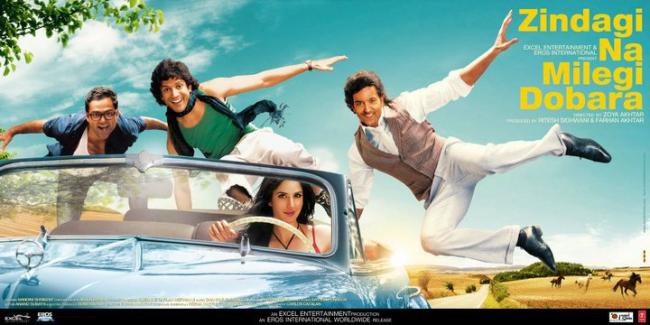 Bollywood director Zoya Akhtar posted a photograph of the swanky blue convertible used in her hit road movie, ‘Zindagi Na Milegi Dobara’, on her Instagram page, which carried a message – “Time to take the car out again”

Bollywood director Zoya Akhtar posted a photograph of the swanky blue convertible used in her hit road movie, ‘Zindagi Na Milegi Dobara’, on her Instagram page, which carries a message – “Time to take the car out again”.

This quickly sparked off speculation that Akhtar was hinting about a sequel to her extremely popular directorial venture which had released exactly a decade ago in July. Moreover, Abhay Deol, who played Kabir Dewan, the bridegroom-to-be in the film, too posted a  picture reimagining ‘Zindagi Na Milegi Dobara 2’ poster on his Instagram handle, but it  featured famous artists like Salvador Dalí, Van Gogh and Frida Kahlo.

ZNMD featured three friends, Farhan Akhtar, Abhay Deol and Hrithik Roshan, who hook off on a holiday to celebrate Kabir’s (Abhay’s) bachelorette. The adventures and epiphanies that unfold on their road journey around Spain, makes up the core of the film. It was a breezy, feel-good film with good looking actors showing of their toned, brown bodies. The songs were a hit and one of the favourites was ‘Senorita’, which were sung by Farhan, Abhay and Hrithik.

But what ZNMD did when it released in 2011 was to mark the arrival of a new writer pair–Reema Gagti and Zoya Akhtar. They had written the script in three months and after the roaring success of this film, both have gone on to make another light-hearted caper, ‘Dil Dhadakne Do’ highlighting the foibles of an upper class Delhi family and ‘Gully Boy’, which revolved around the challenging life of a rapper from Dharavi.

After Zoya posted the picture of the blue convertible on her Instagram post with this enigmatic message, several of her Bollywood friends like Hrithik Roshan commented: “Hahaha yeah baby!” While, Karan Johar piped in with: “What a beautiful film Zo!! One of my all time favourites,” said an IndiaTV news report.

So, is there a sequel in the offing then? Turns out its writers, Akhtar and Reema Kagti, are not exactly against such an idea. “The story, however, has to be special. I don’t want the sequel to ride on the success of ZNMD,” said Zoya Akhtar in an Indian Express report.

ZNMD, which is sort of a coming-of-age film of three men, much like Farhan Akhtar’s 2001 Dil Chahta Hai, had its own distinct voice and flavour. Zoya’s brother Farhan Akhtar made an observation that it was amazing that two female writers and a female director made a movie that’s “such a boys’ film”.

On the effect of the “female gaze” in her films, Zoya explained that Kagti and her films turn out to be from a woman’s point of view. It will have a woman’s perspective on a character, or on an incident. What Kagti and she write are at some level, hopeful of a world they want to see.

According to Zoya, the men in their films are a particular way. “Those are the men we want to see in the world. So, they (the characters) are not extra-macho or masculine. They would be in touch with their femininity a little bit. The women will be a little in touch with their masculinity. It is a more balanced world,” said Akhtar.

Though Reema and she, who have started a joint production house, Tiger Baby Films, had different upbringings, come from different spaces and communities, their world view is similar. “There is a commonality in our value system. That makes it easier,” pointed out Zoya, who has the highly anticipated second season of the OTT series, ‘Made in Heaven’, on the misadventures of an upper class wedding industry, next on her list. Shooting is expected to start next month.

A web-series (tentatively titled) ‘Fallen’, a police drama with Sonakshi Sinha in the lead, directed by Kagti, is expected to be ready by early next year.

On being asked about making a road movie as a sequel in a post pandemic world, Zoya Akhtar said that they were hopeful that the world will be vaccinated and that this too shall pass, as every other pandemic has. “At some stage, we will be back to where we were. Hopefully, we will treat the planet better. Hopefully, we will make more road movies,” she said in the IE report.