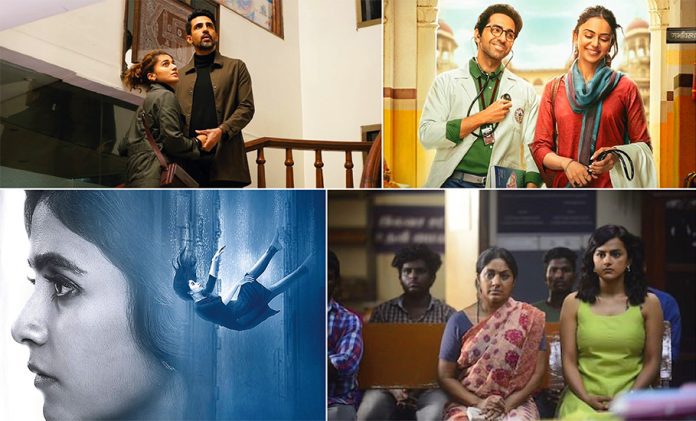 After her tension-filled time travel flick Dobaaraa, which is a remake of Spanish film Mirage, Taapsee Pannu is back, this time with another Spanish rehash. Her new film Blurr, which directly released on OTT (Zee5) this weekend, is a remake of the 2010 Julia’s Eyes, a horror and psychological thriller co-produced by the inimitable Guillermo del Toro.

Julia’s Eyes, which has a 90 per cent rating on Rotten Tomatoes, has been called a stylish, smart, modern Spanish thriller loaded with suspense. It is about a woman who is haunted by the death of her sister Sara, who was found hanging in her house. Julia, however, is convinced that something more sinister is afoot and does not believe it to be suicide. Blurr, which marks Taapsee’s debut as a producer, has been “inspired” by this film. It revolves around Gayatri (played by Taapsee), who is slowly losing her sight whilst trying to investigate the death of her twin sister. 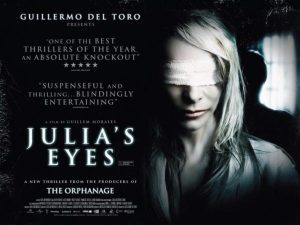 She also has a husband Gulshan Devaiah (another OTT regular, whose web series Duranga, a Hindi crime series, is a Korean drama remake) who is dissuading her from investigating her sister’s death. There is an earnest cop who is trying to solve the case if there is one, and these ugly twists and turns unfold in the scenic hills of Uttarakhand.

(Interestingly, the beautiful Nayanthara from down south also played a visually challenged woman trying to escape the clutches of a killer in Netrikann).

Well, Blurr is being marketed as a thriller and Pannu has shown in the recent past that she can carry off a variety of roles on her shoulders. Be it playing a sports icon, or a woman fighting for her dignity and her agency in Thappad, to a selfish beauty in pulp fiction Haseen Dilruba, to the wild girl who doesn’t know what she wants in life in Manmarziyan, a double-faced woman in Badla, and now, she’s bagged a coveted role in Raju Hirani’s Dunki opposite none other than SRK. Yes, this actress who started off her film career with Vetrimaaran’s Aadukulam has truly carved a special niche for herself in Bollywood with a steady stream of good work.

Here’s a thriller by another talented actress, Anjali, who has struck out on her own in the  male-dominated Tamil industry and is recognised for her “performance oriented roles”. Fall, which landed on Disney+Hotstar this weekend, is based on 2012 Canadian mini-series Vertige, and is about a woman who has no memory of the 24 hours before her alleged suicide attempt.

The story revolves around her attempts to put together what happened only to realise that she is surrounded by people she can’t trust. And, this list of suspects includes her siblings, boyfriend and her parents as well. It doesn’t seem like Vertige is that easily available on any OTT platform in India, so may as well catch Fall.

This Tamil film also stars SPB Charan and Sonia Aggarwal and has been directed by Siddharth Ramaswamy, who has also shot the film. Like Taapsee, Anjali’s career path is going great guns as she has a plum project in her bag: Shankar’s untitled film alongside Ram Charan.

A social commentary on manual scavenging

Here is a film that will not be easy to watch. Witness has two strong female protagonists (Rohini and Shraddha Srinath) (ok, this seems like OTT is giving Indian women actors finally a lot of space to show off their mettle. Usually in big projects they just end up being the male actor’s arm candy).

The film unusually revolves around the ills of manual scavenging. (Remember once even former PM Manmohan Singh had spoken out against it). This film, which is streaming on SonyLiv, features Indrani (Rohini), a sanitation worker, whose college-going son Parthiban (Thamizharasan) dies while cleaning sewers. She chooses to fight back and not be silenced by the ones responsible for his death. However, she has to battle with powerful people like the owners of the apartment, the contractor, the sub-contractors, and some corrupt cops. But, she finds hope and support from a communist union leader, Petharaj (Selva C), a free-spirited Parvathy (Shraddha Srinath) and a lawyer Sivprakasam (Shanmugarajan).

Early reviews are are mixed but if you are in the mood for a movie with a social message and not told too subtly, go for it. The film is streaming on SonyLiv.

So, here’s yet another actress who’s showing that she can do more than act and ooze oomph. Yashoda, which released on Amazon Prime this weekend, a sci-fi survival thriller, features some action sequences, which Samantha carries off with a lot of panache.

The Hollywood stunt master Yannick Ben praised Samantha for willing to give off her best. His style of fight involves a little bit of boxing, kickboxing and some projection one can find in judo and also depending on the choreography, Brazilian jujitsu and also a mix of MMA.

The actress seems to have taken to action sequences like duck to water, must be The Family Man 2 hangover. Incidentally, Ben was also handling the action scenes in the spy thriller series in which Samantha played a Sri Lankan terrorist.

In Yashoda, Samantha joins a high-end surrogate programme in the hope of finding her missing sister. But sinister revelations inside the facility completely throw her off guard. The film was dissed by many reviewers, as the filmmakers Hari Shankar and Harish Narayan have created an outlandish storyline that makes the movie unconvincing and insincere. It is only Samantha that shines in this mediocre medical thriller.

What is with film plots these days? Good actors are being forced to act in middling films which seems like a gross injustice to their talent.

The actor who cocks-a-snook at stereotyping

Here’s Ayushman Khurrana steadily plodding on in Indian cinema making his own kind of films that cock-a-snook at stereotyping in society.

Doctor G, directed and co-written by debutante Anubhuti Kashyap, is playful and provocative without being facetious, dealing with questions about gender roles and expectations with candour and humour. While Doctor G is another one of Ayushmann Khurrana’s carefully cultivated list of films that deal with prickly social themes, this one takes on issues rarely broached in Indian cinema.

Dr Uday Gupta (Khurrana) wants a career in orthopaedics but because of his low rank in the entrance examination he ends up in the gynaecology department of a Bhopal medical college and hospital. How he fights his conditioning and prejudices that only women can be gynaecologists is the plot of the film. It is supposed to be fun and also gives you room for thought. Check it out on Disney+Hostar.

Away from blood and thrills, here’s a nice Christmas romance for the diehard romantics out there. Amazon Prime Video’s Something from Tiffany’s follows the lives of two couples who collide in a classic holiday gift mix up. Rachel and Gary (Zoey Deutch, Ray Nicholson) are happy enough but not quite ready for that big commitment, while Ethan and Vanessa (Kendrick Smith Sampson, Shay Mitchell), are just about to make it official.

When a simple mix-up of gifts causes all of their paths to cross, it sets off a series of twists and unexpected discoveries that lead them where they’re truly meant to be. Because love – like life – is full of surprises. For some snarky, eye-roll laughs there is also Sundar C’s Coffee with Kadhal which releases this weekend. Like Priyadarshan’s comedies of yore, this family drama which revolves around three brothers and their complicated love lives which criss-cross with each, has been slammed by reviewers for not being funny.

Check this one out: If you are an avid OTT fan (and part of OTT groups on Facebook to know the latest to watch), then you must check out Netflix series, Wednesday. (Also, Netflix has the knack to drive up momentum about its series and people are rushing to watch them not to suffer from FOMO. (Remember Squid Game?)

So, Wednesday is a sleuthing, supernatural thriller based on Charles Addams’ comic strip. It released on November 23, and now holds the record for the English series with the most viewed hours in a week in the history of Netflix.

The series has surpassed the record set by season four of ‘Stranger Things’, according to Netflix’s internal data measurement. This not a rich man’s voyeuristic game, but Wednesday Addams, the protagonist while attending Nevermore Academy finds something fishy going on. She attempts to master her emerging psychic ability, thwart a killing spree and solve the mystery that embroiled her parents twenty-five years ago.