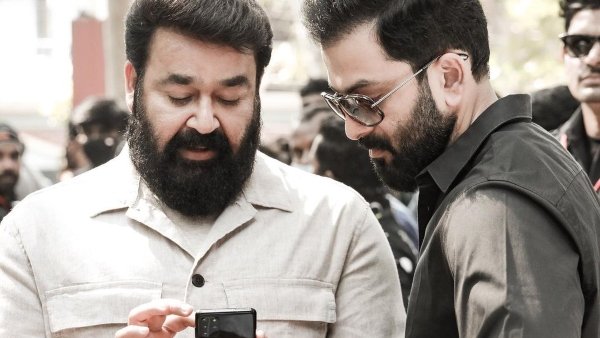 Prithviraj, who is currently working on his second directorial 'Bro Daddy' with superstar Mohanlal, has said in an interview that the veteran actor is like a brother and a mentor to him

How do you direct a larger-than-life hero like Mohanlal, especially if you are a big fan?

Malayalam actor-director Prithviraj Sukumaran, who has directed the superstar in Malayalam cinema’s highest grossing film, the 2019 Lucifer and is working with him in a comedy titled ‘Bro Daddy’, said the superstar is the easiest actor to work with.

In a recent interview to Film Companion on the eve of his Onam release, Kuruthi, on Amazon Prime, Prithviraj said that he is not daunted by Mohanlal’s supergod status in Kerala cinema. Instead, the director said Mohanlal is the easiest actor to “correct” on a film set. And, when Mohanlal stands in front of the camera, he stops referring to Prithviraj as  ‘mone’ (son) and starts calling him “sir”.

The veteran actor is willing to do even twenty takes, he said. However, once Mohanlal walks off the set he becomes a mentor like figure to Prithviraj once again calling him as his ‘son’.

The two actors, who live in the same building, are more than just friends. “He’s a brother and a mentor to me,” said Prithviraj in the interview, adding that they spend a lot of time with each other over cups of coffee and cracking jokes.

Prithviraj who paid an ode to the senior actor by casting him as Stephen Nedumpally alias Khureshi Ab’raam, a shadowy god-like-figure who comes to right the wrongs in the world (of politics), revealed that “discussions are on” to make Lucifer as an 8-episode mini-series in Hindi. However, Prithviraj was unsure if he would direct the mini-series because of the lack of time though “they” were keen on it.

“I’m happy with someone else making the film but they’re not. So, let’s see,” he told FC.

From the start, Lucifer was a three part streaming series but they had made the feature film, Lucifer, out of the first season. “Now, we’ve decided to make feature films with the original material from season two and three,” he added.

Empuraan is the sequel to the blockbuster Lucifer, which is one of the most-awaited upcoming projects of Malayalam cinema. The title which means ‘more than a king and less than a god’ or an overlord is ostensibly being made on a bigger canvas, said media reprots.

“A script that we hope will become a film that makes you smile, laugh, and want to revisit. I guess it’s about time we all got a happy film,” said Prithviraj, who is happy to be back on the director’s chair with his favourite actor.

According to Prithviraj it is great to watch Mohanlal at work. “He’s got this deep-rooted gift of comprehending things very differently. I’m realising this more in Bro Daddy because Lucifer was all about keeping the performance under the radar a bit. In Bro Daddy, I let him a little loose,” he said in the interview to FC.

In Lucifer, it was all about Mohanlal of yore, “the man next door and a superhuman, vulnerable lover and brutal avenger, self-effacing individual and omnipotent hero”, as a reviewer described his character in the film. Prithviraj played the mysterious warrior Zayid Masud, who is at the beck and call of Lucifer, ever ready to protect his life and execute his orders.

On Mohanlal’s style of working, Prithviraj said that he felt that the senior actor liked to be detached from the whole thing. When Mohanlal does a second take, he takes it to another level, said Prithviraj. And that is the reason the focus of some of the shots in Lucifer had gone wrong in many places because he wanted to retain takes that were very good.

“I know that, because I’ve retained takes where he’s so good but the focus has gone wrong. He’s given me something else when I asked him for another take,” said the actor.