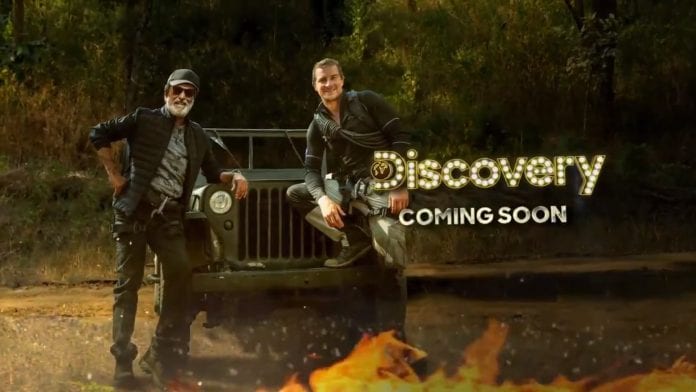 Television host Bear Grylls on Wednesday (February 19) shared a motion poster for his upcoming show Into the Wild in which actor Rajinikanth makes his television debut.

The 45-year-old adventurer shared the video on Twitter where he is seen posing in front of a jeep along with superstar Rajinikanth for the show.

“I have worked with many stars around the world but this one for me was special,” tweeted Gryll, who has earlier hosted Man vs Wild.

Preparing for @Rajinikanth’s blockbuster TV debut with an Into The Wild with Bear Grylls motion poster! I have worked with many stars around the world but this one for me was special. Love India. #ThalaivaOnDiscovery pic.twitter.com/kFnkiw71S6

Displaying the true qualities of a Rajinikanth fan, he hastagged his post with #ThalaivaOnDiscovery.

Rajinikanth had shot for the reality show in January at the Bandipur forest in Karnataka. The superstar suffered minor injuries while shooting for the special episode of Man vs Wild at the forest.

Earlier, Prime Minister Narendra Modi also featured in one of the special episodes of Man vs Wild in 2019. The show had featured world-renowned celebrities like former US president Barack Obama, actors Kate Winslet and Julia Roberts and tennis icon Roger Federer.

Did right thing by not joining politics, saved ranks from COVID: Raj...

Rajinikanth to get Dadasaheb Phalke Award, top film honour, for 2019...