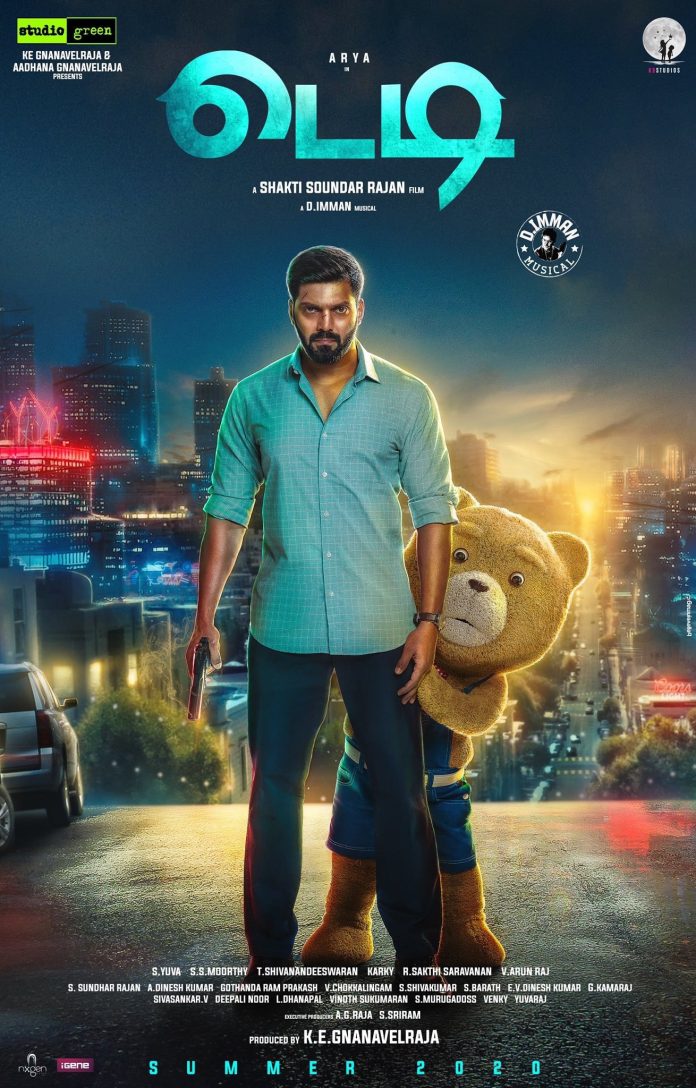 Teddy is the latest addition to Shakti Soundar Rajan’s filmography. We’ve seen him steer clear of making commercial films in his previous projects such as Naigal Jakiradhai, Miruthan and Tik Tik Tik. Any serious Kollywood film buff would want to watch his film because he shies away from using masala fight and love scenes. But, we have to review Teddy without taking into account his earlier three films.

Everyone knows before stepping into the theatre that this is a blatant remake of the 2016 Hollywood film, Teddy. But Rajan’s remake of the original flick is bad. Period. It has a weak script, shoddy cinematography and editing and there is nothing that can save this film.

The first half introduces us to all the characters, actually only two, Arya and the Teddy. The other characters have not been developed and may as well have not been in the film. It’s baffling why a director like SSR couldn’t make a decent remake, let alone come up with an original idea and write his own script. The movie slowly reveals the plot in the latter part of the first half of the film and then quietly slides into an idle mode. The sequences shot in Azerbaijan drags and lacks any purpose and the audience just wants to go to sleep.

Also read: Uncertainty over fate of Tamil films from December 1

The antagonist in this movie is as trivial as the snake in Chandramukhi. This film is marked by shallow writing and displays no cinematic craft. S Yuva’s cinematography too is shallow. The colour tone of the entire film itself is dull and mundane. The director and Yuva had a great chance to show Azerbaijan to the audience in a different way but guess what? It is not at all a surprise, when they waste that chance.

Let’s take a moment to review the music separately. D Imman, the hard-working music director has really tried to do justice with his music. But what can he do, if everything else about the film is bad. His music is good, as it moves in sync with the film’s flow but it fails because the entire film flops miserably.

As the characters have not been developed with care, the actors look bad however hard they try. Arya, to give him his due, tries very hard and that comes through in the film. The visual effects used to portray Teddy is convincing. We cannot say it’s the best, but for a Disney Hotstar offering it is quite convincing. Can’t imagine what a delight this film would have been if the director had put extra effort to hone the script. This movie then could have inspired a spate of films in this genre using visual effects to tell a story. If we go back a decade and revisit Pizza directed by Karthik Subbaraj, we saw how it was able inspire many filmmakers to make horror movies.

It is sad to see another badly produced remake in Kollywood. Even one star out of five is a generous rating for this movie. SSR could’ve inspired a generation of filmmakers to harness visual effect/CGI in an effective way but he just let go of that chance.