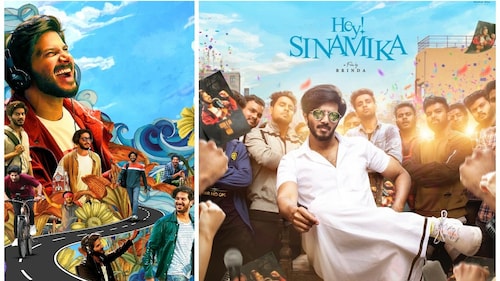 Dulquer is being seen in Tamil cinema after his 2020 outing 'Kannum Kannum Kollaiyadithaal', in which he played a smooth con artist

Actor Dulquer Salman’s cop drama ‘Salute’ was one of the films that got shelved due to the surge in COVID-19 cases around the country. The young actor, however, seems to have moved on to promote his upcoming Tamil romantic comedy film Hey Sinamika.

Dulquer is being seen in Tamil cinema after his 2020 outing, Desingh Periyasamy’s directorial ‘Kannum Kannum Kollaiyadithaal’, in which he played a smooth con artist. His role in the film was widely appreciated and reviewers wanted to see more of the actor in Tamil films.

A romantic comedy, ‘Hey Sinamika’, which is helmed by choreographer and first-time director Brinda, is scheduled to release in theatres on February 25, if all goes well.

On Wednesday (January 12), Dulquer released a poster from the film on Twitter in which he is seen clad in a veshti and sneakers with a ‘swag’ look. The poster was to announce a song from the film, which will release on January 14, but many actors from the south industry started reacting to his poster.

‘Hey Sinamika’, which went on the floors earlier this year, is about a young couple played by Dulquer Salmaan as Yaazhan and Aditi Rao Hydari as Mouna, who are on the brink of divorce. After five years of marriage, the independent wife decides she had enough of her doting and fussy stay-at-home husband and cooks up outrageous plans to separate from him. Kajal Aggarwal is also in the film.

‘Hey Sinamika’ borrows its title from a song from Mani Ratnam’s hit Tamil romantic comedy the 2015 ‘O Kadhal Kanmani’, which starred Dulquer and Nithya Menen. Interestingly, this Tamil film marks Jio Films’ foray into Tamil cinema. It is regional cinema, that is Tamil and Telugu films that have kept the cash registers ringing during this pandemic.

Earlier, Dulquer had announced that his Malayalam movie ‘Salute’ where he plays a cop Arvind Karunakaran has been postponed due to the COVID-19 situation. The investigative thriller directed by Rosshan Andrews(of Mumbai police fame) is produced by Dulquer Salmaan under his banner Wayfarer Films. Bollywood actress Diana Penty makes her debut in south cinema with this film.

Dulquer also has R Balki’s ‘Chup: Revenge of the Artist’ waiting in the wings. The screenplay and dialogues of ‘Chup…’ have been co-written by Balki and film critic-turned-writer Raja Sen and Rishi Virmani. The film’s title was revealed on October 10, on the death anniversary of the legendary filmmaker Guru Dutt, with Balki saying that ‘Chup’ is an “ode to the sensitive artist.