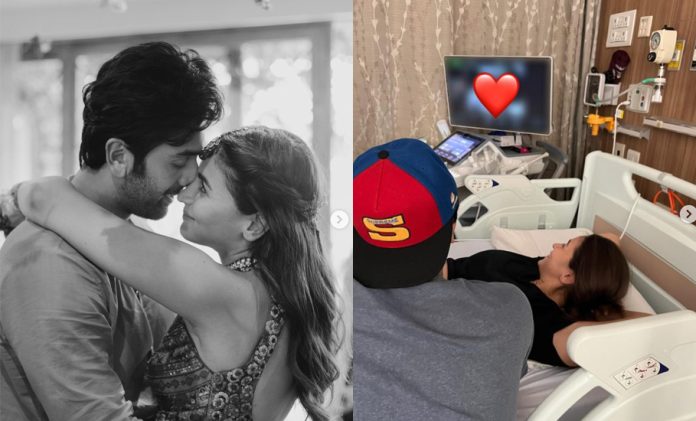 Leading Bollywood actors Alia Bhatt and Ranbir Kapoor, who married two months ago, have sprung a huge surprise on their fans. Alia, who is currently shooting for her Hollywood debut film, took to Instagram and shared a photograph of her in a hospital beside a  sonography machine. The screen had a heart on it.

A smiling Bhatt had her husband Ranbir Kapoor by her side and she confirmed that they were expecting their first child soon. She wrote beside the message, “Our baby…coming soon.” The baby is expected in November, said media reports.

Her fans went wild congratulating her and sending her heart emojis. Many actors like Ishaan Khattar, Mouni Roy, Tiger Shroff, the couple’s pal, Karan Johar, also wished the couple. Ranbir Kapoor’s sister, Riddhima posted an emotional message saying that her babies were having a baby. “Love you both so much”, she wrote on Instagram.

Ranbir and Alia got married in April in a private and intimate wedding ceremony with only family and close friends in attendance at Ranbir’s house in Mumbai. The couple were in a relationship for four years and had been hounded by the question as to when they would tie the knot.

Also read: As she weds Ranbir, a look at Alia Bhatt’s growth, from ‘nepo’ kid to top star

Recently, Ranbir spoke glowingly about his marriage with Alia and said that it had been a very big and great year for him since he had got married. And, he called marriage “a beautiful thing” that has happened in his life. According to him, he couldn’t have asked for a better partner than Bhatt. Further, he went on to elaborate that he had always linked marriage to dal chawal in his films.

Ranbir was alluding to his oft-quoted dialogue in ‘Yeh Jawaani Hai Deewani’, in which, he had said,  “Shaadi is daal chawal for pachaas saal till you die. Arey life mein thoda bahut keema pav, tangdi kebab, hakka noodles bhi hona chahiye na (Can’t have boring dal-rice for 50 years, you need other dishes and other flavours too)!”

But he admitted, “But boss, after my experiences in life, I can say dal-chawal is the best. My life with Alia is best. My life has dal chawal with tadka, pickle and onions, it has everything. So, I couldn’t have asked for a better life partner than her.”

Also read: Alia Bhatt off to shoot for her Hollywood film, says she is nervous

Bhatt is currently shooting for her Hollywood debut Heart Of Stone and Rocky Aur Rani Ki Prem Kahani, where she will be seen with her Gully Boy co-star, Ranveer Singh. Rocky Aur Rani Ki Prem Kahani is reportedly already 80 per cent complete, while she hopes to complete her Hollywood film Heart Of Stone, a spy thriller for Netflix starring Wonder Woman star Gal Gadot, by the end of July.

Media reports quoting sources close to her said that Alia Bhatt has planned her pregnancy in a way that it doesn’t derail any of her work commitments. She is hoping to complete the films before the end of July.

Meanwhile, Alia’s mother, Soni Razdan said that they are simply overjoyed and over the moon with happiness. “Both for the soon-to-be parents as well as for the whole family. There is nothing more profound, more joyful and more significant in life than having a child and bringing another being into this world. Our cup runneth over,” she said.