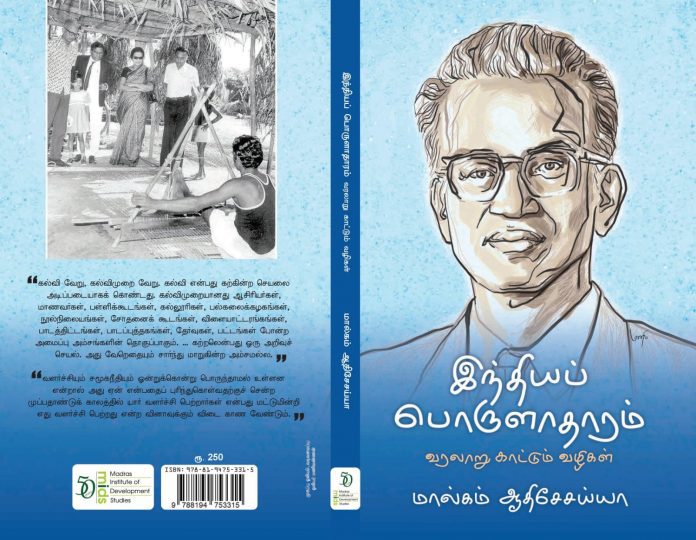 A total of 19 translated articles written by Malcom S Adiseshiah and published between August 1986 and January 1990 have been brought out as a book in Tamil, titled Indhiya Porulaadhaaram: Varalaaru Kaattum Vazhigal (‘Indian Economy: The Path Shown by History’).

In his Independence Day address to the nation this year from the ramparts of Red Fort, Prime Minister Narendra Modi announced that his government would soon launch a major infrastructure plan called ‘Gati Shakti’, to boost the economy. The project, worth ₹100 lakh-crore, seeks to develop ‘holistic infrastructure’.

In this backdrop, it is worth remembering the words of renowned economist and educationist Malcolm S Adiseshiah. The country and its power elites face a clear-cut choice which no language can blur, and which calls for a national and individual political decision, he said.

“The choice to be made is between a society which continues among the present basic structure, resulting in increased production, larger capital accumulation, and improvement in the condition of the poor majority on the one hand, and a society which takes economic inequality, amounting to social inequity, head on, and takes the hard but necessary decisions to move towards a less inegalitarian social order in accordance with the constitutional provisions of equality of all citizens of the country, on the other,” wrote Adiseshiah.

Webinar: Climate change: India must step up, but others have a role too

This was in response to the question, “What would the Indian economy look like on August 15, 2001?”. He penned these thoughts on August 15, 1986, in an article titled ‘The tryst and the choice between this and that’. And, 35 years hence, we haven’t decided yet on the choice.

This is one of the many articles Adiseshiah wrote in English and published in the Yojana magazine. Those articles were also translated and reproduced in the magazine’s Tamil version, Thittam. A total of 19 translated articles published between August 1986 and January 1990 have been selected and now brought out as a book in Tamil, titled Indhiya Porulaadhaaram: Varalaaru Kaattum Vazhigal (‘Indian Economy: The Path Shown by History’).

The book has been published to commemorate the golden jubilee year of the establishment of the Madras Institute of Development Studies (MIDS). The Institute was founded by Malcolm S Adiseshiah and Elizabeth Adiseshiah in January 1971, shortly after the former’s retirement as Deputy Director-General of UNESCO.

The articles in the book cover a wide range of subjects such as economics, employment and labour welfare, poverty eradication and education, besides some commentaries on NGOs, secularism and population.

“Adiseshiah wrote many articles in Yojana between 1980 and 1994. It was the time the sixth, seventh and eighth Five Year Plans were implemented,” recalled A Arivazhagan, Publication Assistant, MIDS, who edited the book. “In these periods, two of our former Prime Ministers were killed and there was no political stability. However, there was an expectation among many on how India would be on the world stage after 15 years, i.e., in 2000. Adiseshiah, without any political bias, has evaluated the merits and demerits of each Five Year Plan and written the articles.”

The ‘MIDS Bulletin’ brought out under the editorship of Adiseshiah had a special place among the candidates sitting for UPSC exams, Arivazhagan added.

Born in Vellore district as the second son of Varanasi Paul Adiseshiah and Grace Nesamma on April 18, 1910, Malcolm Adiseshiah was an alumnus of the London School of Economics, where he did his doctorate.

He taught at institutions such as Kolkata’s St Paul’s College and Chennai’s Madras Christian College, and was Vice-Chancellor at the University of Madras. He also held official positions in various organisations such as the World University Service Centre, UNESCO, and the Tamil Nadu State Planning Commission. It was during his tenure at UNESCO that the magazine UNESCO Courier was brought out in Tamil and Hindi. He was instrumental in relaying educational programmes through television.

“During his vice-chancellorship, Adiseshiah established higher post-graduate education centres in Coimbatore and Tiruchi. These were later converted into Bharathiar University and Bharathidasan University, respectively. He decentralised power in order to prevent corruption and, to create uniform development, he spread education,” said Arivazhagan. He added that Adiseshiah was a visionary in the sense that he divided school education, technical education and university education, and made them operate separately.

According to educationist SS Rajagopalan, it was Adiseshiah’s efforts that paved the way for teachers in colleges to continue with doctoral studies along with salaried leave.

In January 1971, Adiseshiah founded MIDS and, 50 years later, it stands as one of the most reputed research institutes in the country.

Writing about Adiseshiah’s contribution to education, well-known sports administrator Eric Prabhakar said many generations of thinkers before him had not specifically addressed education’s impact on the issues of poverty, deprivation and inequality.

“For Plato, education was provided for the elite to perpetrate the status quo by means of selection and stratification. For Rousseau, education was needed to fortify man against corrupt social institutions. In totalitarian societies, the objective of education was to infuse loyalty to the central party. In capitalist countries, education was given to perpetuate a particular spectrum of values, attitudes and beliefs for an open society. It was Adiseshiah the economist who spoke out that education had a role beyond these limited parameters, as a crucial public service for the eradication of poverty and for socio-economic growth,” said Prabhakar.

According to Adiseshiah, one of the significant features of the Indian economy was that over 35 years out of the 40 since Independence, it had travelled along the ‘well-planned’ path, i.e. Five Year Plans. One of the major developments in those 40 years was that the nation had grown from being a foreign-dependent economy to a self-reliant one.

At a time when the unorganised sector is passing through a difficult time because of the COVID pandemic, Adiseshiah’s thoughts — on how the scope of the term ‘unorganised labour’ keeps expanding — hold particular relevance.

As an economist, Adiseshiah worried about decreasing investments in agriculture. The use of the word ‘black economy’ angered him — he considered it a racial slur, and believed that ‘black economy’ was one of the reasons for poverty. He believed that people who have black money should be given a life sentence, and proposed that by implementing the Land Ceiling Act in both letter and spirit, the country can wipe out poverty to some extent.

Further, Adiseshiah asserted that India is not a development economy but one that develops the section of people who have buying powers. His advice was that while calculating development, economists should not only focus on who has grown but also on what has grown. He warned against centralisation of education through the New Education Policy, and had faith that NGOs can play a vital role in finding benami surplus lands and distribute them to the poor.

Adiseshiah was appointed as a member of the State Planning Commission in 1971. Economist and author S Neelakantan, who worked closely with Adiseshiah, said his contribution to the Commission was unparalleled.

“During his term, and even after his term, till his death in 1994, he single-handedly brought out a mid-year review on the schemes and projects launched through the Planning Commission. After that, the work of bringing out the review was entrusted with an institute in Mumbai. They did for three years and after that they gave up. This shows how passionate Adiseshiah was in every task he took up,” said Neelakantan.

Tamil Nadu recently launched a scheme called ‘Illam Thedi Kalvi’ (‘Education at Doorstep’). A predecessor was the adult education scheme launched by Adisheshiah decades ago, through which many elders across the State were taught reading, writing and basic arithmetic, Neelakantan added.