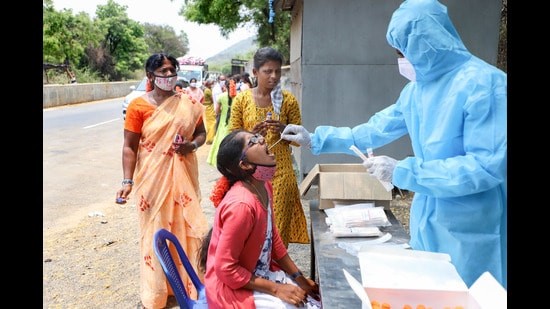 To reconfirm their results, the Tamil Nadu government had resurveyed the third serosurvey in July-August 2021, which revealed that 70 per cent of the population in the state had COVID-19 antibodies. In the first two rounds, the seropositivity rate had been 31 and 29 per cent, respectively.

The survey carried by the Directorate of Public Health and Preventive Medicine (DPH) which was released on October 8, however further showed that the Nilgiris had lower seropositivity rate.

The Nilgiris, which had 13 per cent and 22 per cent seropositivity rates in the first two rounds respectively, shot up to 55 per cent. However, if you consider this figure from a state level perspective, it is one of the four districts which records a seropositivity rate lesser than 60 per cent. The other three districts are Perambalur (58 per cent), Ariyalur (56 per cent) and Karur (51 per cent).

Interestingly, Nilgiris had taken a lot of measures to contain the spread of the virus such as implementing an effective lockdown, shutting down tourist places, making it mandatory for outsiders to carry an e-pass and COVID negative certificates, taking the vaccination to the nook and corner of the district and even demanding a vaccination certificate from people buying alcohol. Due to these reasons, the district reported a lower positivity rate at 55 per cent.

While the lower seropositivity indicates that the people in the district are at lesser risk of being affected by the virus, the higher seropositivity could be a good sign of a lesser chance for the third wave.

With a population of 7.35 lakh, out of which 27,000 odd people are from Particularly Vulnerable Tribal Groups (PVTGs), the district has been recently in the news for achieving 100 per cent vaccination among the tribals in September. (The tribals from six PVTGs are the Todas, Irulas, Kotas, Kattunayakans, Kurumbhas and Paniyas.)

Out of the 27,000, the eligible population of 21,750 people have been inoculated and they are all primarily tea estate workers.

“There could be only one reason why the district has a low seropositivity rate. Much of the population could have not been affected by the virus. It means the lockdown implemented by the district administration was successful,” said Pavan Ananth, programme manager, India COVID SOS (ICSOS), an international non-profit volunteer group, which documents the promising practices of COVID-19 management.

This is just a survey and not absolute numbers, he added. Interestingly, the samples collected from the district for the survey is only 237.

However, according to media reports, as of September 1, six districts namely Chengalpet, Coimbatore, Erode, Nilgiris, Nagapattinam and Thanjavur remained at high risk level. The district has 364 active cases as on October 8.

Meanwhile, Dr P Balusamy, deputy director, public health, Nilgiris said, “If the sero prevalence rate is lower in Nilgiris this means that we have taken measures in such a way that people of the district are protected well. We haven’t given a chance for the virus to infect them. Wherever the case load was high, there the seropositivity will also be high,” he said.

When the seropositivity rate is low and if we able to achieve 100 per cent vaccination, then it indicates that those districts are handling the pandemic better, added Balusamy.

‘TN is improving in Covid management’

Talking to The Federal, Dr TS Selvavinayagam, director, DPH said that to confirm that the state’s efforts were moving in the right direction, a resurvey was conducted in August 2021.

“In July 2021, a survey was conducted and the results were announced. We have taken five districts each from higher and lower seropositivity categories and resurveyed it. In the July survey, some of the western districts had a low seropositivity rate. After the state and district authorities intensified the COVID management efforts, the seropositivity rate has gone up in those districts,” he said.

The best example is Erode district. In July, its seropositivity rate was 37 per cent and now it has increased to 70 per cent. And Virudhunagar, which topped the chart in the last survey with 84 per cent has further increased to 88 per cent.

The setopositivity of Chennai remains unchanged at 82 per cent, according to the study.

The survey is purely scientific and we don’t meddle with the numbers. There are other technical reasons why the Nilgiris reported a low seropositivity rate, said Selvavinayagam.

“The combined results of these questions are reflected in the resurvey. Though these are scientific things, what we need to understand is that we are improving better than in the past,” Selvavinayagam pointed out.