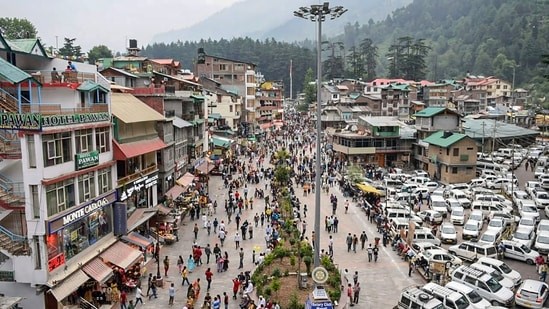 Travel junkies in the country, who have wings on their feet, may have to curb their natural desire to pack their bags and embark on sweet ‘revenge travel’ trips after being forced to stay indoors for so long.

This is because a high-profile research study conducted by the Indian Council of Medical Research (ICMR) and Imperial College London has warned that ‘revenge travel’ could intensify the third COVID wave in India, and lead it to peak between the months of February and March next year.

The study, which was published in the peer-reviewed ‘Journal of Travel Medicine’, examined the impact of domestic travel on a potential third COVID wave in India to gauge the risks behind a spurt in revenge tourism.

The researchers, which included ICMR Director General Balram Bhargava, created a mathematical model which could throw light on what could befall a hypothetical state in India that resembled Himachal Pradesh (HP). The model had replicated the dynamics of the first and second waves in HP, and how it played out in the state, including the much lower seroprevalence of SARS-CoV-2 the state showed compared to the rest of the country.

In fact, India’s severe second wave had less impact in smaller states with low population density was even less intense, the researchers noted. The researchers noted that Himalayan mountain towns had always managed to keep the COVID numbers low in previous waves and had also witnessed a delayed peak in cases, said media reports.

India has not ruled out a third COVID wave and experts believed that it will break sometime in the coming months.

The study however pointed out that a surge in domestic travel to holiday destinations could boost local economies in dire need of revival. However, the researchers cautioned the states and visitors, residents and local authorities to jointly share “responsibility” to avoid spread of COVID.

A sudden spike in people coming together in tourist spots in large numbers could worsen the third-wave. For example, in HP, during a typical holiday season tourists flocking to the state would increase the numbers of the population by as much as 40 per cent.

Under these circumstances, the third-wave peak could increase by up to 47 per cent during the holiday season, said the study and could occur two weeks earlier, said a report by The Print.

But taking into account India’s population density, the researchers felt this could lead to stronger transmission levels and the third-wave peak could go up 103 per cent, added the report. Furthermore, the timing of the epidemic peak could be hastened by four weeks, if you were to compare a situation where restrictions were being eased without holiday travellers crowding the hill station.

Domestic travel does play a major role in spread of COVID-10, said an IIT-Mandi study last year as well. The researchers therefore suggested remedial measures to ensure this doesn’t happen. Holiday destinations should ask travellers to carry a recent COVID-negative test and ensure they are fully vaccinated. Moreover, they have reveal their  vaccination status. To lessen the severity of a third-COVID wave, holiday-destination states should draw up guidelines to mitigate travel-related risks, the researchers advised.