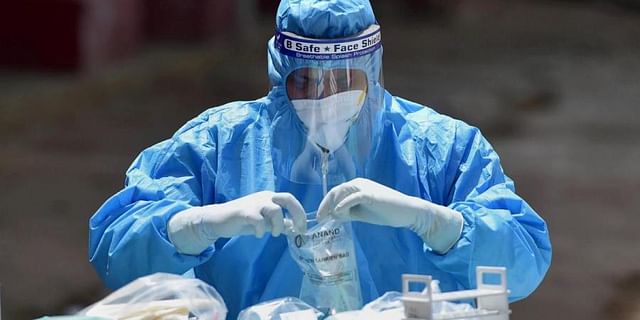 The US seems to have doubled its own previous record of about 590,000 cases that was recorded just four days ago. PTI file pic

The United States set a global record of more than 1 million COVID-19 cases on Monday (January 3), according to data from Johns Hopkins University. It is a figure largely being driven by the highly contagious Omicron variant which causes mild symptoms. The same data showed that there were 1,688 deaths for the same period.

The US seems to have doubled its own previous record of about 590,000 cases that was recorded just four days ago. That number itself had doubled from the previous week, said a Bloomberg report. According to the report, the case count is more than twice the number recorded anywhere else at any time since the pandemic began more than two years ago.

As the Omicron variant continues to spread at a furious speed, many people in the US are testing at home and not reporting their results to government authorities. This means that this current record-breaking number of COVID cases in the US are probably under-estimated, said news reports.

According to US pandemic advisor Anthony Fauci the country is experiencing “almost a vertical increase” in COVID-19 cases but the peak may be only weeks away. He had told a leading TV channel that America is definitely in the middle of a “very severe surge” and uptick in cases calling the soaring infection rate “unprecedented”. However, Fauci added that South Africa’s experience, where the strain peaked and then as quickly subsided, offered the country some hope.

Fortunately, the dramatic surge in cases in America have not caused severe infections and deaths so far and there has been no alarming death rates. But as the Omicron wave sweeps across America, people are cancelling flights, schools and offices are shutting down and hospitals are getting crowded. The soaring infection rates is causing worker shortages, which is in turn burdening large and small-scale companies.

To control the latest outbreak, the US government meanwhile is trying to bring in some restrictions. The isolation period for asymptomatic people who test positive has been limited to five days but the US Centers for Disease Control and Prevention may make it mandatory for a negative test result before people can step out, said the report.

This surge has also led to US companies putting a break on steps to bring their employees back to the offices. Goldman Sachs Group Inc. and JPMorgan Chase & Co. are being more cautious now and advocating work from home for its employees.

The outlook for 2022 remains hazy since it is not clear if the death toll will rise in the weeks to come and whether the Omicron variant will continue to remain a mild one. This will only  be known when the real-world data beccomes available.