Recently, Tamil rapper and poet-songwriter Arivu released his oddly titled ‘Vanakkam Virus’ music video in the wake of the COVID-19 crisis. His caustic greetings seem to be a jibe at the pot-banging and sloganeering of ‘Go Corona, Go.’ Much like his other ‘indie’ releases and cine songs, he responds to political and social ‘horrors’ with palpable anguish and insight.

The weeks since the lockdown haven’t been easy for him. He had to readjust to the routines of a family home in Arakkonam instead of his own life in Porur, Chennai. He worries about his younger sister, a doctor on COVID duty in Vellore and now the additional unease of being in a neighbourhood-turned-quarantine zone after a positive case was reported. None of these had put him in the mind for music-making, he admits.

But once the lockdown was clamped, Arivu watched in despair as millions of migrant labourers getting blindsided. With bus and train services halted, news channels across the country beamed images of daily-wage workers walking several hundred kilometres back to their villages. Civil society groups scrambled to provide food, water and shelter. Emergency buses were arranged after mounting public pressure, yet there were continued governmental failure — the crowds in Delhi’s Anand Vihar bus stop, repeated police brutality and even death. 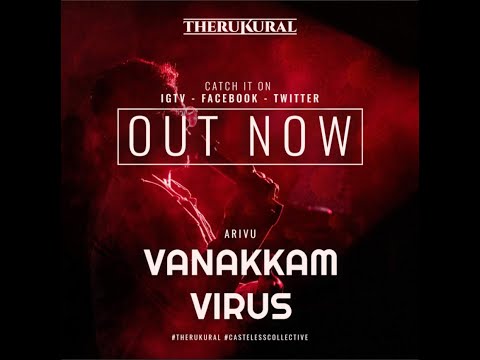 Arivu said, “Every time a calamity hits us, it’s the working-classes who bear the brunt. Their situation kept prickling me. There is an expiry period for each of us in this lockdown. As a writer and a member of middle-class society, I think I can get by for a month. Someone else may be able to go on for two. For daily-wage labourers, it’s only a day. I wanted to ask what these governments are going to do to resolve this.”

And asks he does. It is truly contrasting — the warm, level-headed articulate voice over the phone that Arivu is and the rage, indignation and biting wit that storms through his music. A slightly muffled snarl issues from under a thin surgical mask: “the poor are duped even now. They scrap around for three meals. You clap and laugh in glee in their name, but forget their toil. Will Go Corona, Go make the virus flee? A child dies walking to her village. Age-old superstitions bring out people ringing bells!” His lyrics echo the frustration and helpless anger of many in the country.

‘Vanakkam Virus’ also addresses the communalism in the crisis — the high number of positive cases from the Tablighi Jamat meeting in Nizamuddin led to Islamophobic rhetoric like #CoronaJihad.

The lyrics doesn’t forget the assault on the dignity of workers (and their safety) when the UP Police sprayed them with sodium hypochlorite. Many state governments have asked the authorities to stop using the chemical on people after reports said that it could harm human beings.

The song underscores the duality of civic responsibility: following social distancing protocols set down by the government while remaining vigilant to its injustices and attempts at obfuscation. Further, it signals the need to recognise our fragile position in the natural world and while doing so, acknowledge our violent histories of caste and religious hegemony, he said. This is especially so now, when, more than ever, we rely on science and rationality to survive this pandemic, he added.

The COVID crisis appears to be setting new parameters for cultural production. The film and music industries across the globe are virtually crippled. On the other hand, from Facebook and Instagram posts to live videos, independent artists are re-negotiating methods of keeping collective resistance alive while accepting the physical boundaries set by a deadly virus.

Several people have wondered if the background in the ‘Vanakkam Virus’ music video is symbolic in some way. An amused Arivu explains that it’s just a blanket. It was all he could find in the house to block out the light from the window behind him. He wrote and shot the video in all of two days, using nothing but the laptop’s in-built mic and camera for recording, a few pillows as support and four candles. Even the mask was one distributed for free on the streets. He wryly compares the internet speed he had to work with to a municipality tap. He was able to email the file to an editor and then relied on friends with high-speed Wi-Fi in Chennai to upload the video online using his login details.

To his ears, the sound quality is below par but he is glad the song’s spirit has been so well received. At a time when frontline health workers battle the pandemic amidst a shortage of ventilators, PPE and testing kits, a slick and impeccably turned out music video would perhaps have been jarring. This rough-edged, minimal, dimly lit growl of righteous fury seems to fit in the new world order of prolonged isolation and anxiety.