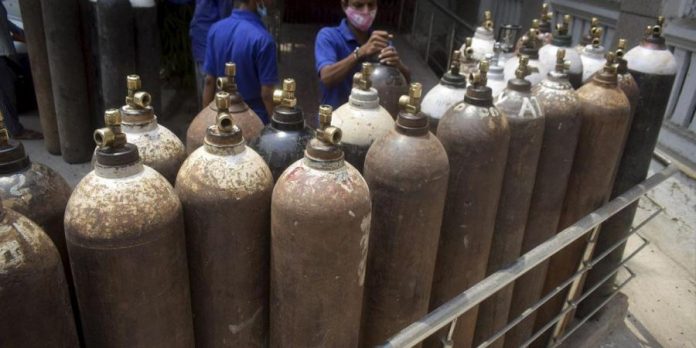 Delhi High Court asked the Centre why they are waiting till April 22 to ban oxygen for industrial use. 'Lives are at stake. Are you going to tell patients to wait till April 22 for oxygen?', said the HC bench | Representational image: iStock

The Delhi High Court has slammed the Centre for not applying their mind in allocating and distributing medication such as oxygen supplies, Remdevisir and vaccines to states, which desperately needed them.

According to a PTI report, the Delhi High Court while hearing a revived petition related to COVID-19 tests, observed that they hoped the diversion of resources and medicines, like Remdesivir and oxygen was based on the needs and situation of each state, otherwise “people will have blood on their hands”.

If there is non-application of mind in this regard, a bench of Justices Vipin Sanghi and Rekha Palli added, “We will be doomed.” The bench was hearing a petition that was disposed of earlier but revived on April 19, with the judges noting the virus had raised its “ugly head” once again. And, that the pandemic is raging with much greater intensity and “it is evident that the healthcare infrastructure is at the stage of imminent collapse”.

“If despite having the medication, it is being sent to region A instead of region B which is in need of said medication, then be sure, blood is on their hands,” the Delhi High Court said.

The Delhi government had earlier told the High Court that they were not receiving oxygen supplies because it was being diverted by the Centre to one of the largest states in the country. Further, questioning the Centre if the oxygen supplies to Delhi, which is suffering from a shortage, could be diverted from industry,  the bench said, “Industries can wait. Patients cannot. Human lives are at stake.” The judges had heard that the oxygen supply to COVID patients in hospitals in Delhi were being reduced because of the scarcity.

When the Centre said oxygen had been banned for industrial use from April 22 (Thursday), the court asked: “Why not do it today itself? Why wait for April 22? Lives are at stake. Are you going to tell patients to wait till April 22 for oxygen?”

The HC also added that if nothing is being done to augment oxygen supply, country will head for bigger disaster. The first priority has to be to save lives, the bench said. Economic interests do not override human lives, and suggested cutting steel, petroleum production to divert oxygen to COVID-19 patients.

“I think the steel and petroleum industries are the real guzzlers – which is why they are producing and consuming more oxygen – because if people keep dying the way they are dying, what is the point of producing more for the economy?” asked Justice Sanghi.

Meanwhile, the Centre told the High Court that only three per cent patients needed ICU beds and 24 litres of oxygen was required for ICU patients, 10 litre for non-ICU beds, reported NDTV.

“80 per cent cases are mild, while 17 per cent are moderate. Only three per cent need ICU care,” said the Union Health Ministry. It also said 378 MT of oxygen had been given to Delhi, 220 MT are needed for 74,941 cases. But we have allotted 378 MT,” the Centre argued. while its government had asked for 700 MT.

PTI added that senior advocate Rahul Mehra, appearing for the Delhi government, told the court that doctors were prescribing Remdesivir and people are unable to get it from the market despite having prescriptions.

“Long and short of it is that it (Remdesivir) is in short supply,” the bench said, adding that  giving clearance for setting up units to manufacture would not yield quick results as establishing the facilities for manufacture takes time.