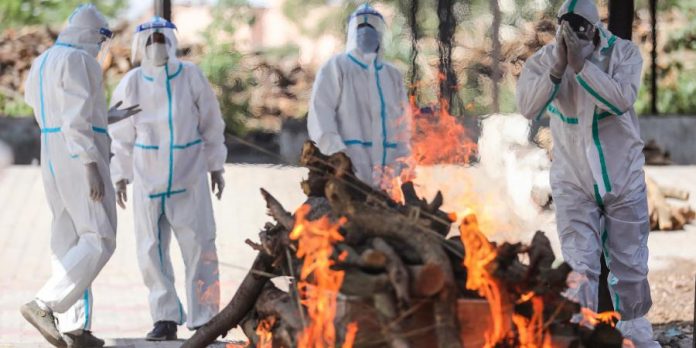 Chandra had insisted that she would go to the crematorium for her father's last rites though she was dissuaded against it. (PTI pic: representational purpose only)

Distraught over her father’s death due to COVID, a 34-year-old woman has sustained 70 per cent burn injuries in Barmar district in Rajasthan, after she flung herself into her father’s funeral pyre at the crematorium on Tuesday (March 4).

The burn victim, Chandra Sharda was rushed to a hospital nearby and later, referred a hospital in Jodhpur, where her situation is critical, said the police.

According to media reports, earlier in the day, her father Damodardas Sharda, 73 had died due to COVID-19 at a hospital. While he was being cremated at about 4pm, the youngest of his three daughters, a grieving Chandra, suddenly jumped into the pyre. Her sister Pinky tried to pull her back but she threw herself back into the pyre, said Bheru Singh, who is associated with the Shamshaan Ghat Vikas Samiti, said The Indian Express.

Although, she was pulled out by her relatives and people around her, she had already sustained around 70 per cent burn injuries.

Damodardas Sharda, whose wife had died some time ago, had three daughters and it was the youngest who had jumped into the funeral pyre, said Station House Officer, Kotwali police station, Prem Prakash to PTI. The police officer added that the youngest daughter had insisted to go to the crematorium for the last rites though she was dissuaded against it.