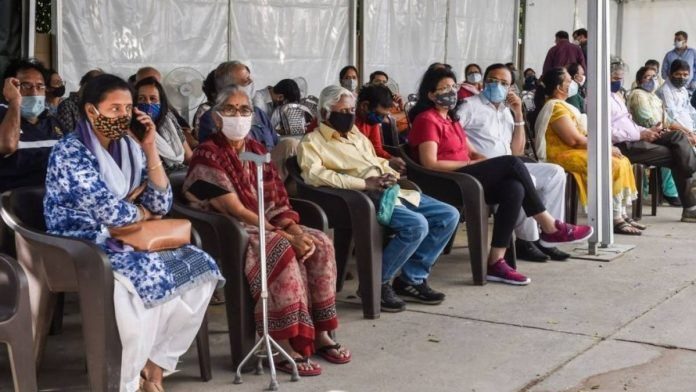 Delhi citizens wait for hours to get vaccinated. Private hospitals and drive-through inoculation sites charge about double the actual price of Covishield and Covaxin vaccines

The second wave of the COVID-19 pandemic has had a horrific impact and left an indelible scar on the psyche of Delhiites. Not long ago, the capital was witness to mass cremations, even as citizens of the national capital helplessly ran around to get oxygen, medicines, and beds in hospitals for their loved ones. The photographs and videos of these shocking scenes had shaken the entire world.

The nation’s capital reported 946 new COVID cases and 78 deaths on Sunday (May 30). The positivity rate in Delhi dropped to 1.25 per cent and the single-day COVID death toll also fell below 100 for the first time since April 13. The situation is getting better but the citizens of Delhi, who have witnessed this unprecedented catastrophe and have developed a deep-seated fear of the virus, are running helter-skelter day and night to get a jab.

Sunil Arora (38), a shopkeeper in Paschim Vihar, Delhi, told The Federal, “I have been trying to get a slot of the vaccine on the Cowin app for me and my family for the last month now but I couldn’t book even a single slot. We have seen what happened in the second wave. At least 8 of my family members and friends lost their lives. There have been deaths in my neighbourhood as well.”

“However, my immediate family is fine. There are predictions for the third wave now. Who knows what will happen at that time? So, I can do anything to get my wife and two children vaccinated to save their lives from the third wave. I have visited many hospitals as well but failed to get the vaccine shot,” Arora added.

The Delhi government has halted the vaccination drive for people in the 18-44 age group citing lack of vaccine supply. Deputy Chief Minister Manish Sisodia said on Saturday that the supply of vaccines for those in the age category of 18-44 will resume only after June 10.

Sisodia said in a press conference, “Because of the central government’s mismanagement, the youth are not getting vaccinated in any state. In Delhi, we’ve had to stop it and yesterday, the Centre told us that the vaccines for the youth will not arrive before June 10.”

He added, “There are 92 lakh people in the 18-44 age category in Delhi. For them, we need 1.84 crore doses of vaccines. However, we received only 4.5 lakh doses in April and 3.67 lakh doses in May. The only way for these 92 lakh people to be secure is by vaccinating them. I want to ask the Centre that if the Delhi government wants to vaccinate our youth, what problem do you have with that?”

According to the data available with the Delhi government, out of 1.84 crore doses needed for the 18-44 age category, only 8 lakh doses have been given till now which is only 4 per cent of the total jabs to be administered. With no more vaccines available with the government until June 10, the data is unlikely to improve until the next fortnight. 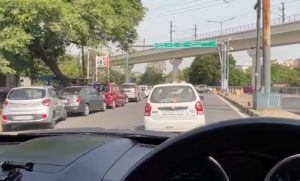 While free government vaccination centers are shutting down for the age category of 18-44 due to lack of doses, private hospitals have initiated a drive-through facility in several parts of Delhi-NCR.

A similar situation was witnessed in Gurugram as well. At a drive-through inoculation site at DLF City Center Mall on MG Road, the turnout was so huge that there was a queue of cars that stretched to 5kms. But only 225 people could get a vaccine shot.

Nihar Singh, a resident of Dwarka in Delhi said, “I wanted to get my second dose of vaccine. I came at 6am in the morning. I registered myself and got the vaccine two hours after the drive started at 10 am. There were people who came earlier than me as well.”

Nihar got his second dose, but a majority of people who were left out started protesting at the site. A Gurugram resident, Priyam Verma said, “We waited at the inoculation site for the whole day but did not get any vaccine. If they knew they had only 200 vaccines, why did they make us wait the entire day.”

He added, “They should have told us at the time of registration. We came at 8 am in the morning and now it is 7pm, and we have not eaten anything. The government is very careless about the vaccine. We want to get vaccinated but they are not providing us any.”

A hospital staff member said, “Our aim was to vaccinate 200 people every day at a particular inoculation site. We also don’t have enough vaccines. We have to send vaccines to other inoculation sites as well.”

Vaccines at double the price

A ToI report citing a Max Hospital spokesperson mentioned that the landed price of Covishield was ₹660-670, including GST, transportation, and storage costs.

Also, there is a wastage of 5-6 per cent due to breakage which is taken into account, and thus the cost of vaccine per inoculation is ₹710-715, she added. “The vaccine administration charges include hand sanitiser, PPE kit for staff, biomedical waste disposal, etc., which comes to another ₹170-180. The net cost is then ₹900,” the publication quoted her as saying.