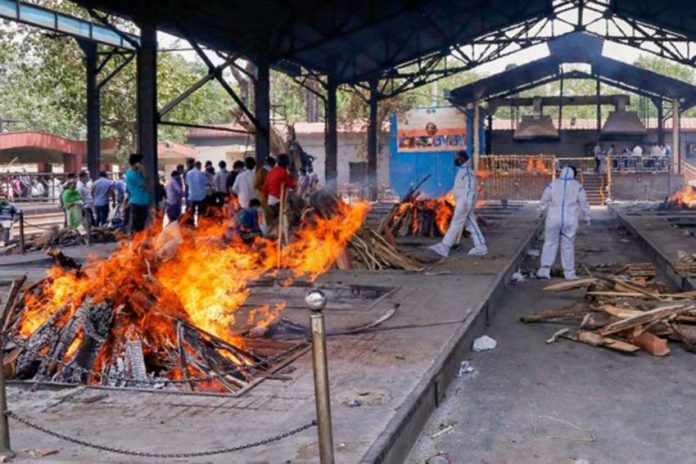 It is not just Aman, dozens of people are waiting around at the crematorium to cremate a family member. “At first, we did not get a  hospital bed. Similarly, oxygen cylinders and medicines were not available and now we are unable to cremate our family members as well. Nobody helps us. Are the lives of people become so cheap now?,” asked Subhash, another Delhiite, who is also waiting to cremate his wife for the past 16 hours.

Shaking Delhi’s spirit and soul, an unimaginable tragedy is unfolding at the capital’s  crematoriums, which are struggling to cope with the deluge of the dead arriving at a frightening pace.

Vineeta Massey, the owner of Massey Funerals, told PTI, “I have not seen such a bad situation ever before in my life. People are moving with the bodies of their loved ones from pillar to post …almost all Delhi crematoriums are flooded with bodies.”

Ambulances and cars are lined up outside the crematorium waiting for their turn, while inside, one can hear the crackling of dry wood from the burning pyres, as dozens of dead  are being cremated together.

By an official count, 3,601 people have died this month, 2,267 succumbed to the disease in the last seven days alone in the capital, which is battling a severe second wave of the COVID-19 pandemic. In February, the death toll was 57, and it was 117, in March.

No space and wood left

A staff member at the Municipal Corporation of Delhi (MCD) crematorium at Nigambodh Ghat told The Federal that they have limited space to cremate the bodies. He said, “We have increased our capacity and made 100 extra make-shift chambers. But there are too many dead people and that also is not sufficient. And on top of that, we are also running out of wood.”

Delhi’s municipality-run crematoriums are running out of wood required for pyres on account of the rising number of COVID-19 deaths. According to municipal officials, they have now sought the help from the state forest department.

The municipal agencies in the city (north, south and east MCDs) have approached the state forest department to help arrange for wood. On its own, the East Delhi Municipal Corporation (EDMC) had issued an order directing officials to use dried cow dung as fuel.

Before the second wave hit the city, Delhi’s largest crematorium, the Nigambodh Ghat, required 6,000-8,000 kg of wood daily, but this has now shot up to more than one lakh kg of wood daily.

North MCD mayor, Jai Prakash, told the media that the stock of wood in crematoriums is depleting fast. The corporation has had to create additional makeshift cremation facilities in parking lots and parks, and the requirement for wood has significantly gone up. “We require the cooperation of the Delhi government to meet the daily  demand for wood,” he said.

The city’s forest department said it has received requests from municipal agencies for wood and that an order, to cut the branches and tops of at least 500 trees in advance to meet the demand for crematoriums, had been issued.

While Delhi government data shows 250-350 people are dying every day, the civic authorities however said that the official daily count of COVID-protocol funerals in the city had crossed the 500 mark last Friday (April 23). And, since then they have been cremating more than 500 bodies every day.

An MCD official said, “On Tuesday (April 27), COVID-protocol funerals in the city crossed 600. The Delhi government is hiding the real data of dead in the city. The situation is bad enough in the government records but on the ground, it is worse.” Data collected from the Delhi Municipal Corporation for 26 crematoriums it runs shows that 3,096 cremations of COVID victims were conducted between April 18 and April 24.

The total figure of COVID deaths released by the Delhi government in the same period shows 1,938 deaths – indicating that 1,158 COVID deaths in Delhi may have gone uncounted.

Moreover, MCD only takes into account bodies brought from hospitals as COVID deaths. The reason for the mismatch of its data with official figures is not yet known.

“We term deaths due to COVID deaths for the people who come directly from the hospital, in ambulances or when people bring dead patients from hospitals. There are people who die from COVID at home or don’t get a bed in hospitals, we don’t count them as COVID deaths. If we start counting them, the data can touch 1,000 a day, as the non-COVID cremations too have been rising rapidly in key facilities,” added the MCD official.

India needed more democracy than it had during COVID-19: Amartya Sen...